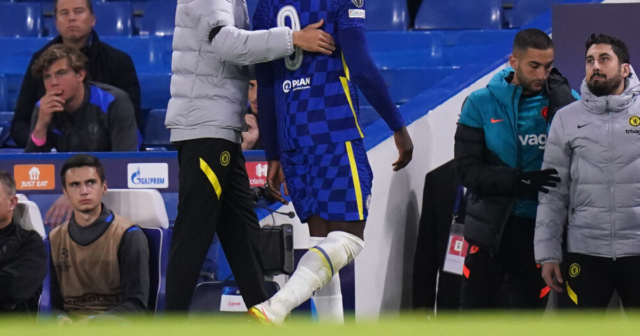 But did the Blues boss need to go so strong against minnows Malmo?

Of course, there is no way you can blame injuries on one game in particular and Romelu Lukaku and Timo Werner getting injured against Malmo tonight is just sheer bad luck.

However, should they have even been on the pitch at all tonight? That is a question worth asking. Chelsea played Malmo, a team who even their ‘second string’ side would be expected to roll over easily.

But I’m not claiming we should have even lined up with a total ‘B-team.’

It would have been nice though to have seen a few of Chelsea’s key players rested for this one in order to keep them fresh for the weekend, especially with Thomas Tuchel even stating a number of his players were struggling with fatigue this week.

But now Chelsea face potentially playing Norwich on Saturday without BOTH of their main strikers, and that is not a good position to be in. They could even be out for longer as well, which is pretty disastrous.

Tuchel for me must have been a little concerned about this game going so full strength tonight.

He was concerned about not getting all three points, and I wonder if those doubts have crept in after a few lesser performances from his team recently? I wonder if he has lost a bit of confidence in this group?

I totally understand the importance of getting all three points tonight after losing to Juventus in the last game.

Getting six points against Malmo in this group is so important. But surely Chelsea could still have done this without Lukaku? Without Werner? I have no doubts they could have.

Hudson-Odoi proved he has what it takes to step up in their absence with an emphatic run from deep to setup Kai Havertz, who also proved he can step up and be the finisher with his goal.

Werner had a hamstring injury, that can be related to overplaying, and Tuchel himself had even admitted his players were overplayed after all the international matches and traveling around recently.

I feel he could regret the decision now to not rest a few key players. But they got the result and they got the win that they needed, and football is about getting results, and we can have no regrets about that.

A 4-0 thrashing in the Champions League though, is certainly a huge positive from tonight.