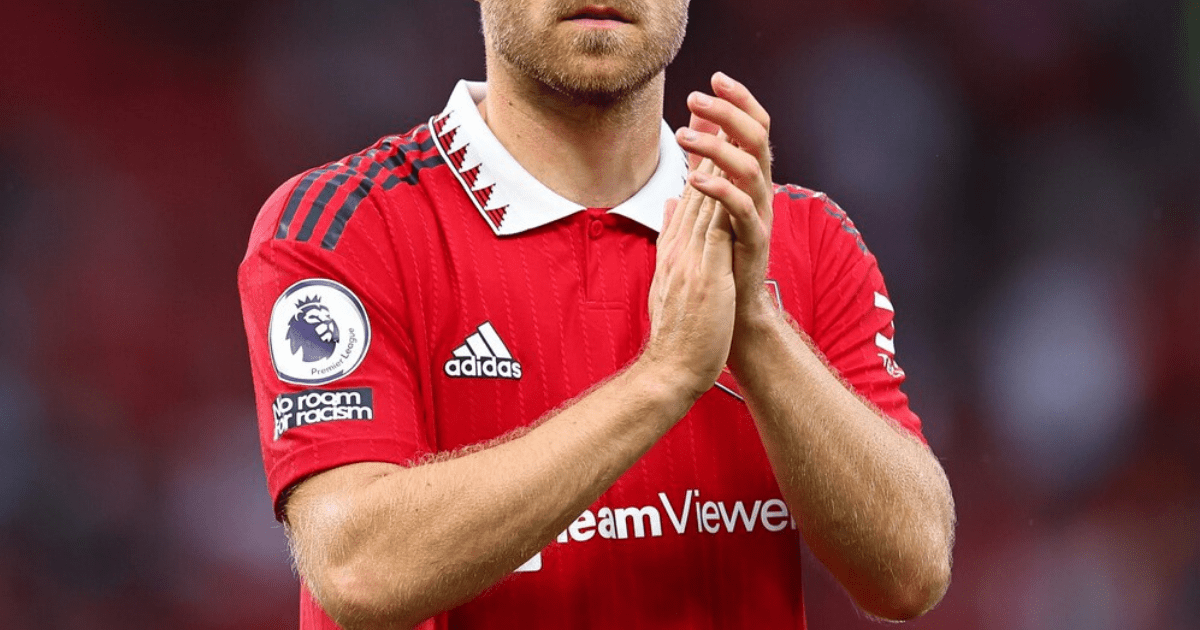 AS comebacks go, this one could make a Hollywood movie.

It was only 15 months ago that Christian Eriksen was fighting for his life after collapsing on the pitch at Euro 2020.

Just 15 months ago, Eriksen fought for his life following a cardiac arrest

The Denmark playmaker, 30, then saw his contract at Inter Milan terminated, after he was fitted with a heart defibrillator and banned from playing in Italian football.

Brentford gave him a second opportunity on a six-month contract in January, where he managed to impress.

That prompted Manchester United to offer him a deal, and this season he starred in a 3-1 win over Arsenal.

Now he appears ready for the World Cup – coming off an incredible performance against France over the weekend and breaking a Nations League record.

‘I was gone for five whole minutes’

Eriksen’s renaissance is even more remarkable considering his plight on the Parken Stadium pitch on June 12, 2021.

Off the ball, he fell to the ground and immediately the game was stopped. Viewers around the world looked on in horror as the midfielder suffered a cardiac arrest.

Captain Simon Kjaer rushed to his aid, before admirably organising his team to make a circle around the star who was fighting to stay alive and getting treatment.

He was given CPR and an Automated External Defibrillator was used to get his heart working again.

“I was gone for five whole minutes,” he told the BBC. 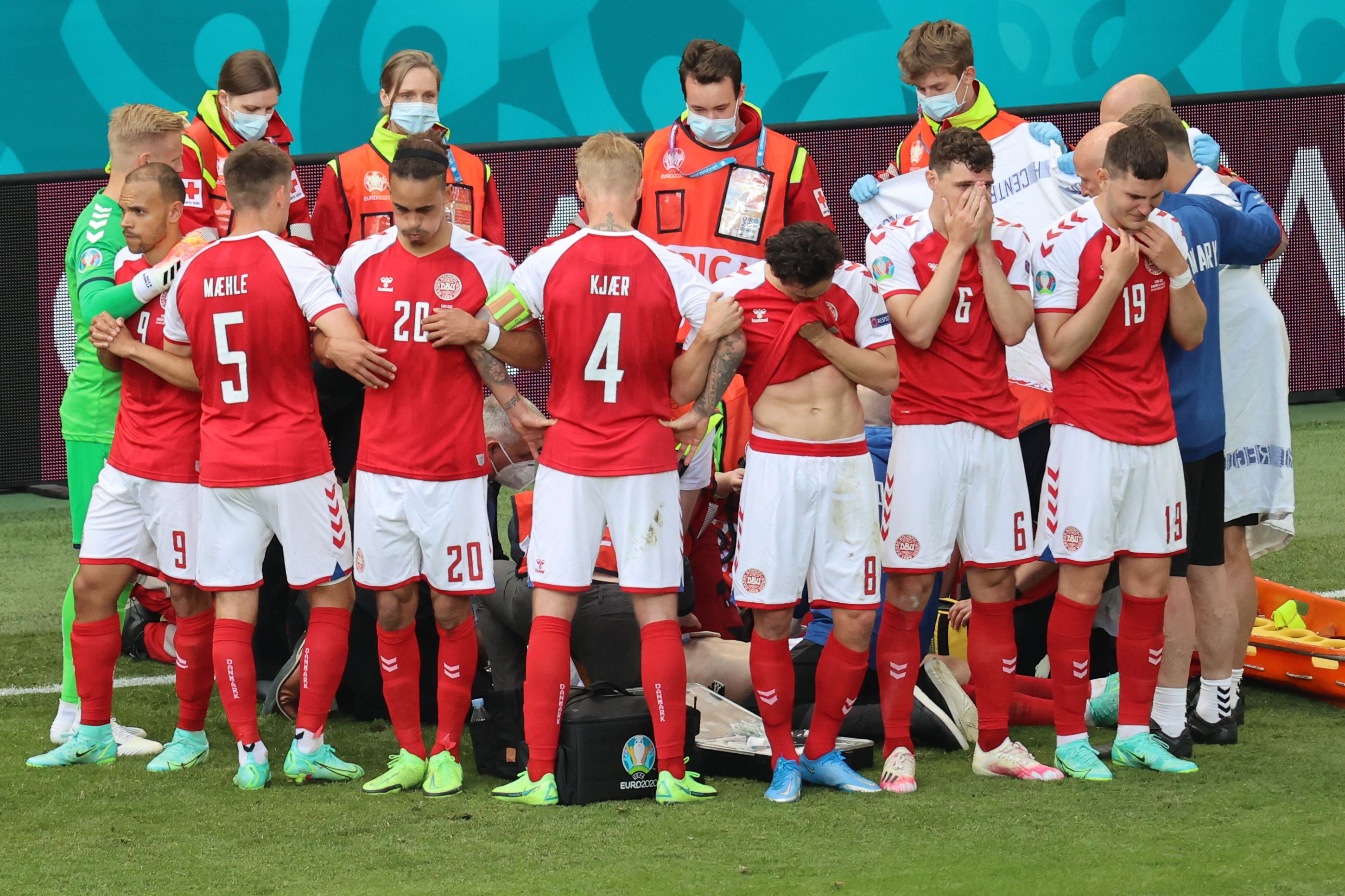 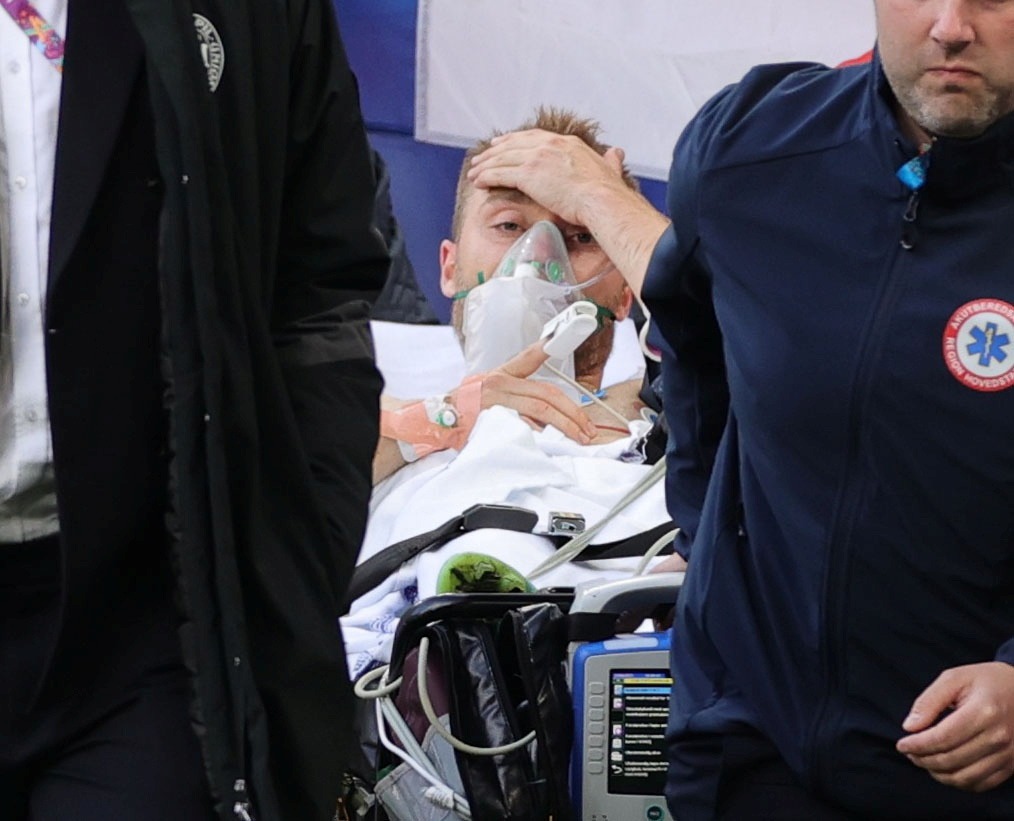 Ready for the challenge

Three days later, Eriksen posted a picture giving the thumbs up from a Copenhagen hospital bed and reassuring fans he was doing “fine under the circumstances.”

He vowed not to give up. He promised it would not be the end.

To give him a chance at playing in the future – Eriksen was fitted with a revolutionary Implantable Cardioverter Defibrillator, which can reset the heart after a cardiac arrest.

It’s a device half the size of a mobile phone that has wires leading to areas of the heart.

But, Italian rules stipulate that players playing with heart starting devices are not allowed to play in the league again.

It left Eriksen in a dilemma. 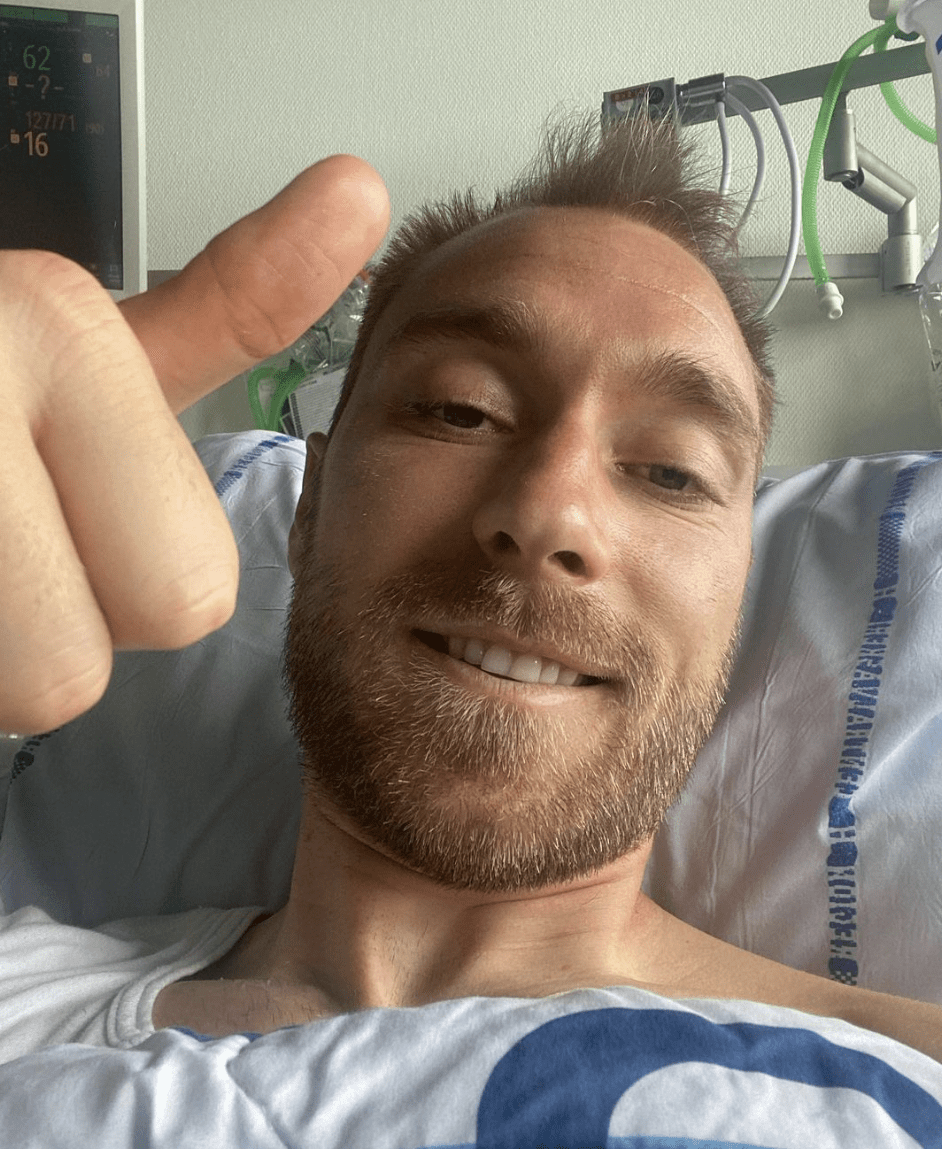 A revolutionary Implantable Cardioverter Defibrillator was fitted in Eriksen’s heart

Under the guidelines, Inter Milan had no option but to terminate Eriksen’s contract.

They came to a mutual consent – with Inter apologetic over the circumstance.

“The club and the entire Nerazzurri family wish Christian all the very best for his future,” Inter said in a statement.

“Although Inter and Christian are now parting ways, the bond shall never be broken. The good times, the goals, the victories, those Scudetto celebrations with fans outside San Siro – all this will remain forever in Nerazzurri history.”

It left Eriksen planning his future. 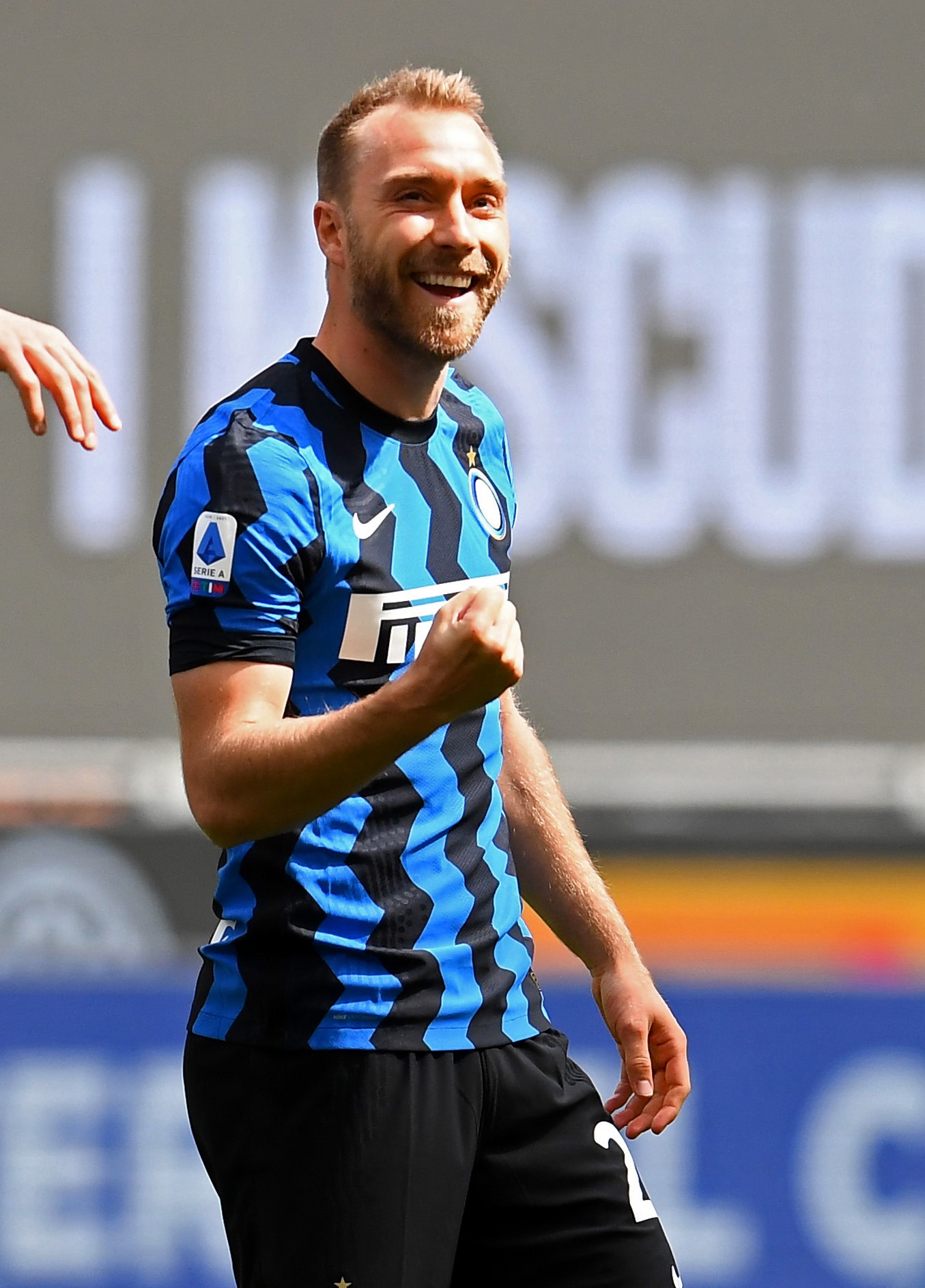 In January, Eriksen returned to our shores with Brentford.

Thomas Frank, who worked with him at youth level with the Danes, revealed the former Spurs star was eager to impress and enjoyed being back in a football environment.

“We are having him seven months after the incident so he missed badly being part of the group, being part of a club and hopefully we can add new chapters to the Brentford story.”

27 days after it was announced the Bees had given him a short-term deal, Eriksen was back on a football pitch again.

Replacing Mathias Jensen in 2-0 defeat to Newcastle, he was given a standing ovation as he ran onto the pitch.

Just over two weeks later, he recorded his first assist in a 2-0 win over Burnley.

Then in April, he was instrumental in Brentford stunning Chelsea 4-1 at Stamford Bridge – scoring his first goal since his return.

Astonishingly, between the date of Eriksen’s Bees debut to the end of last campaign only Kevin De Bruyne and Martin Ødegaard created more chances in the Premier League. 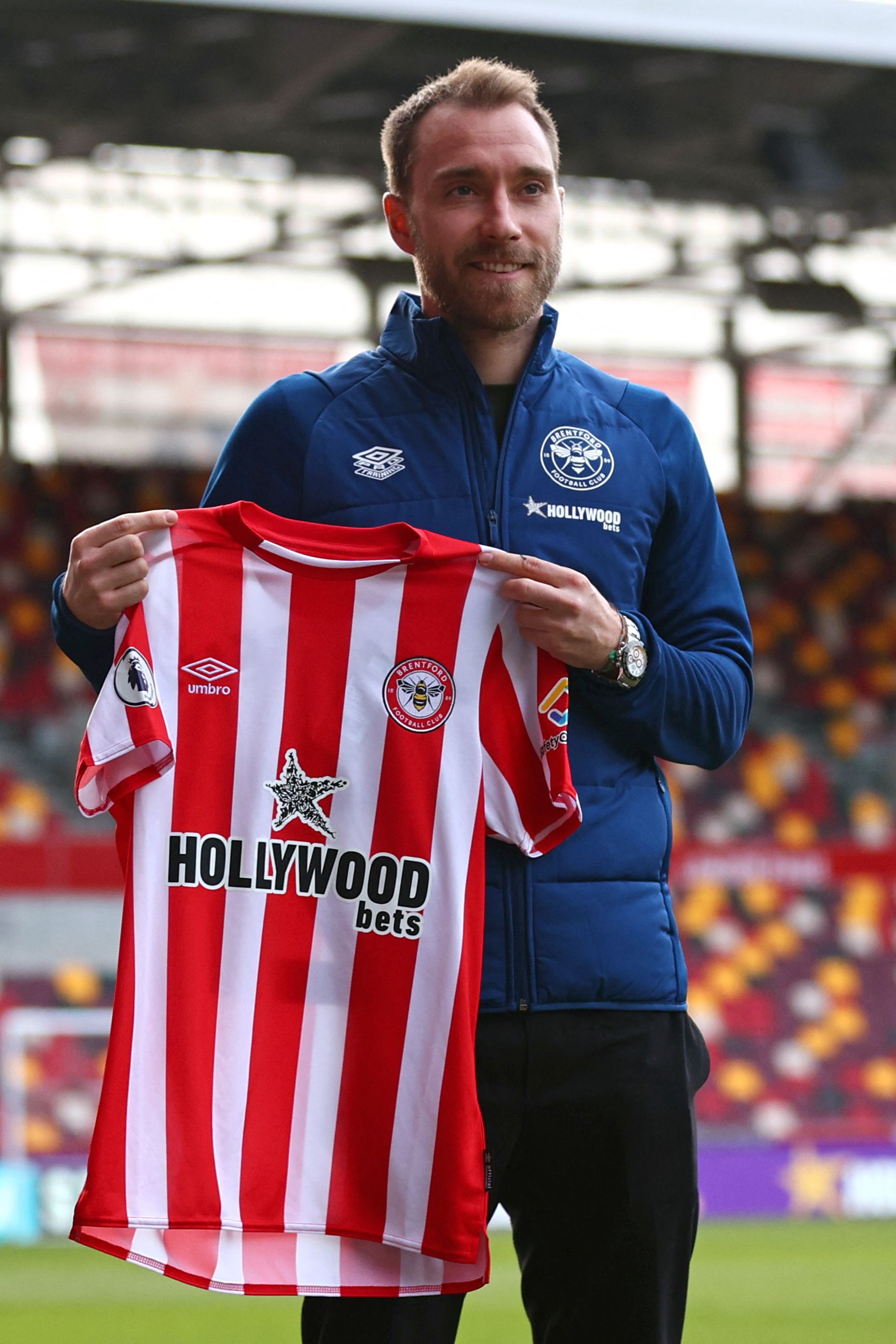 Back in January, Brentford offered Eriksen a route back to football 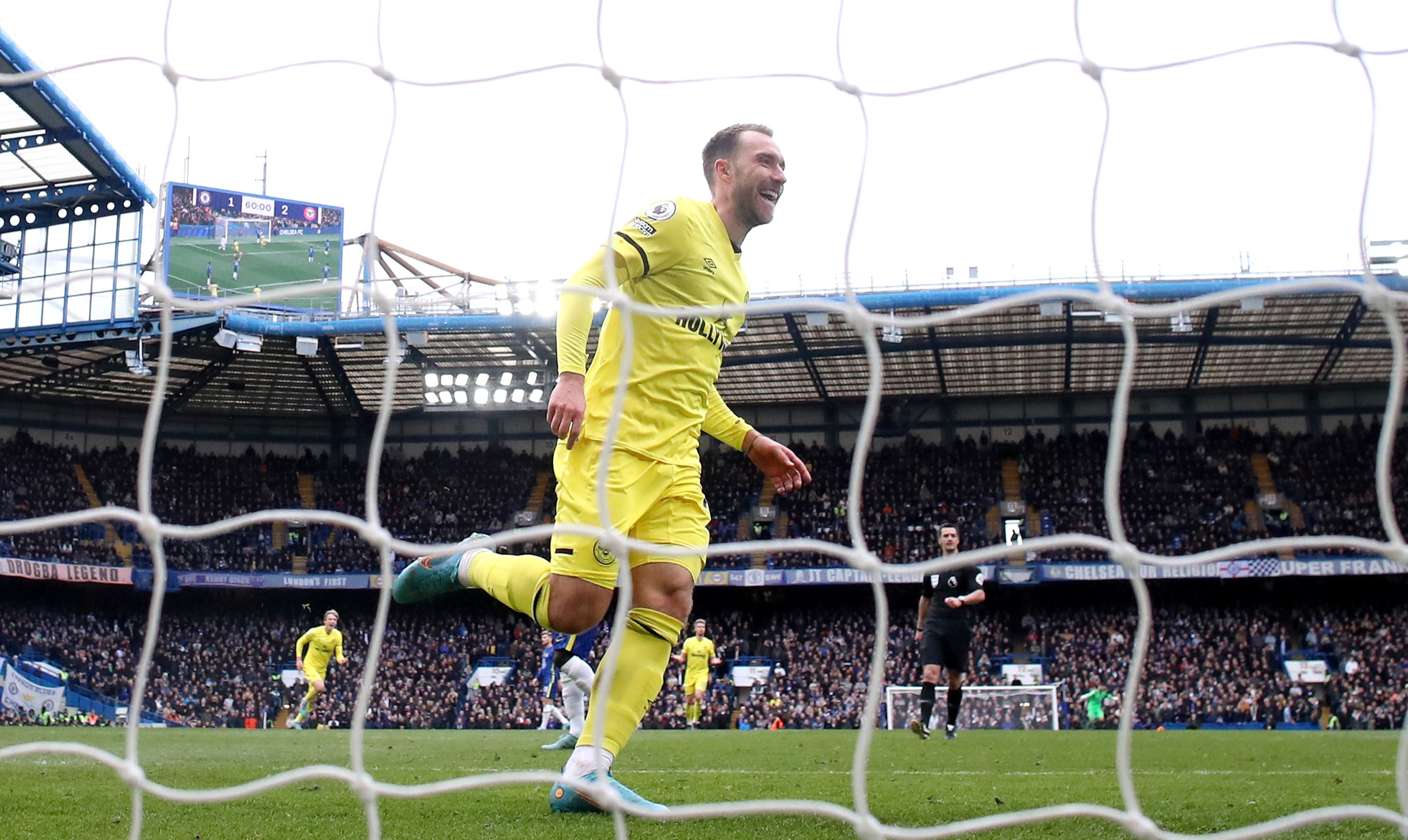 Eriksen was instrumental in Brentford’s 4-1 win over Chelsea

After his heroic return, Eriksen was a reported target for old club Spurs, while Brentford were hopeful he would stay in West London.

It was the opportunity to work under Man Utd boss Erik ten Hag, though, that swayed his decision to sign for the Red Devils.

At first, the decision seemed to backfire. A humbling at home to Brighton was followed by a 4-0 thrashing against Brentford. Worse still, Eriksen was caught on the ball for one of the goals as United and their new boy struggled.

They got their season back on track with a morale-boosting win over Liverpool, then narrow wins over Southampton and Leicester. Eriksen was beginning to find his feet.

And that came just in time for the home visit of league leaders Arsenal, a game that Eriksen had a major say in deciding.

His passing during a crucial moment in the match helped United restore their lead against the Gunners – earning him the man-of-the-match award from Sky Sports pundit Gary Neville. 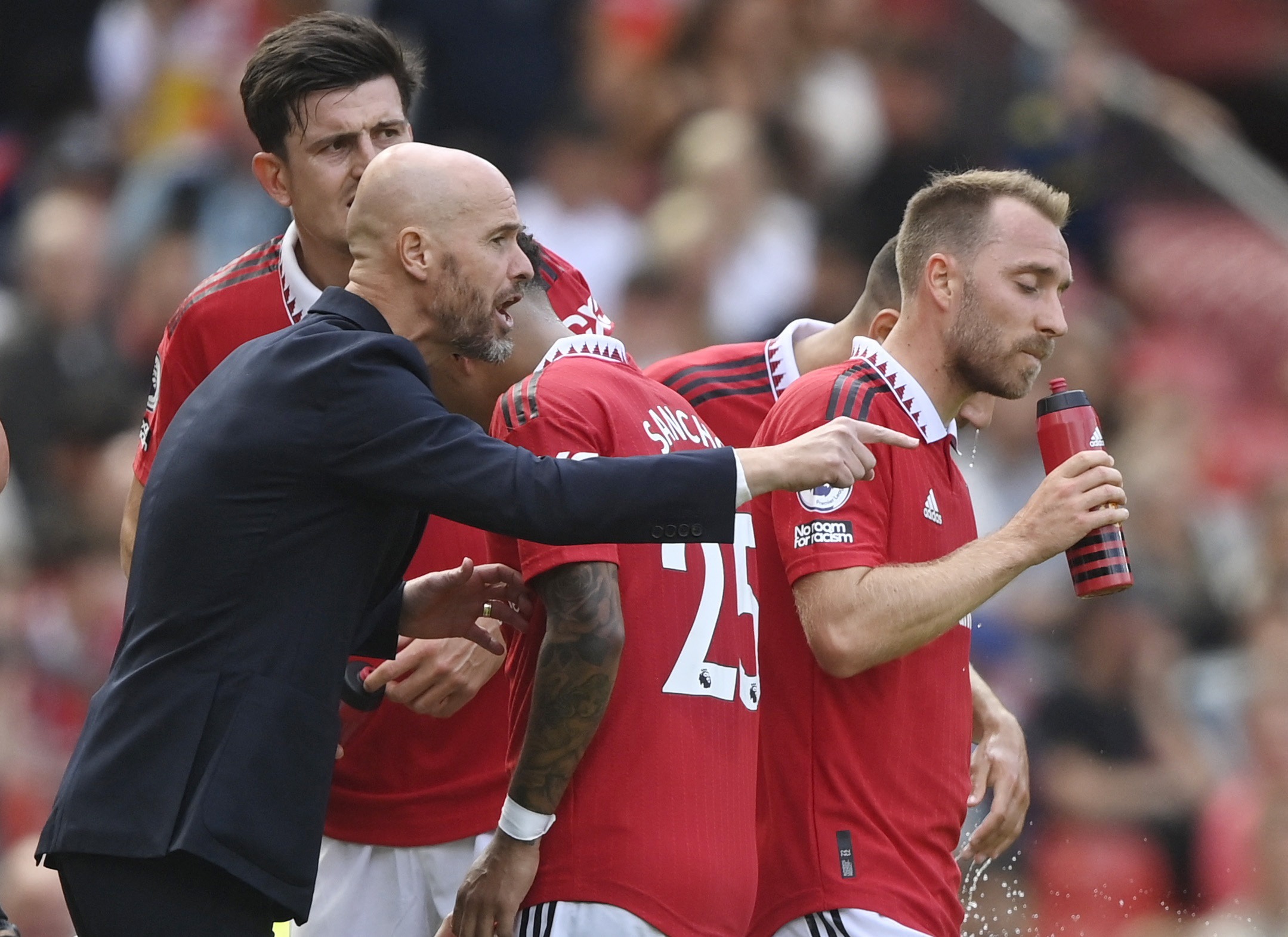 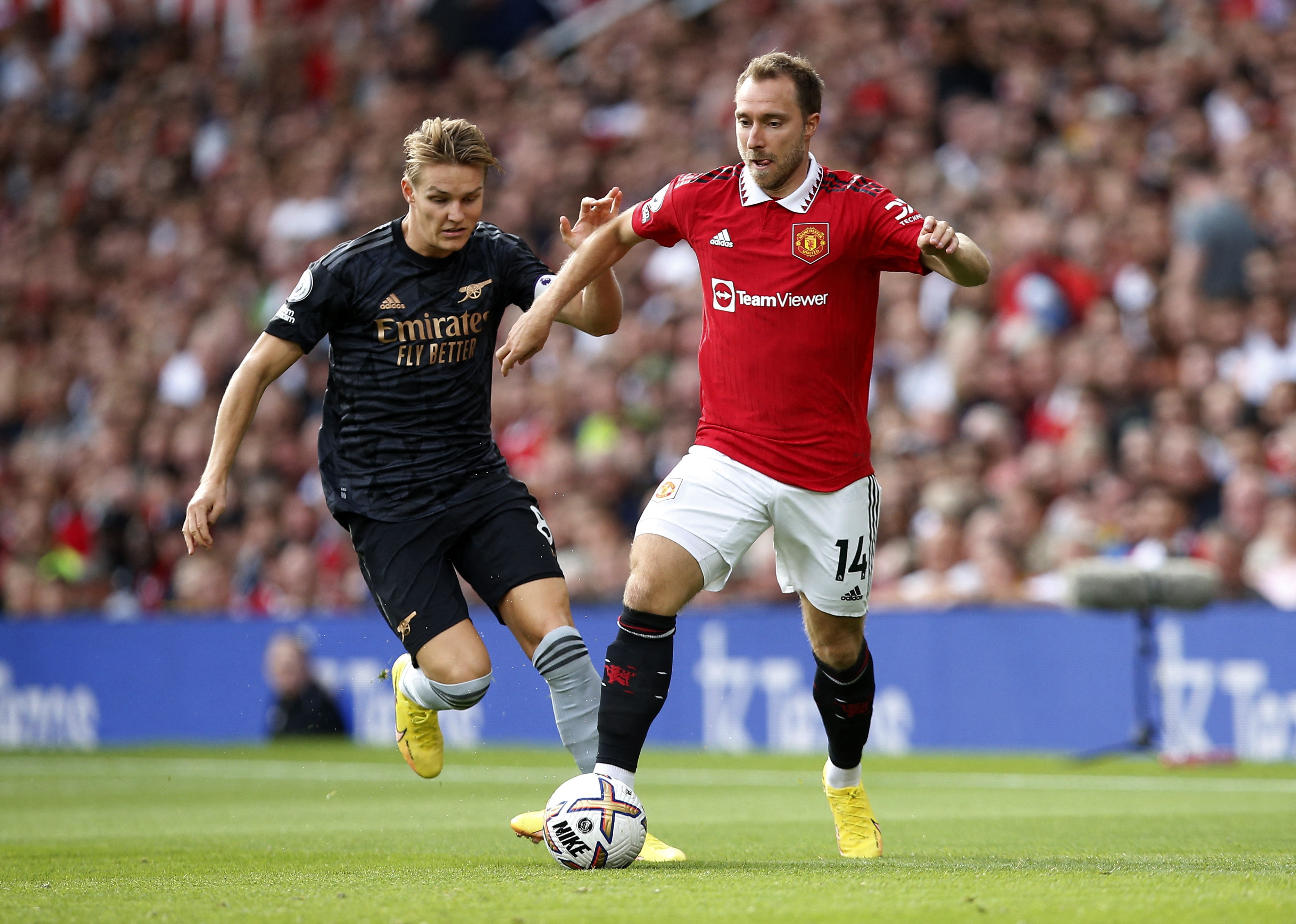 Eriksen was man of the match against Arsenal this season

Taking his form onto international duty

This week, on international duty, Eriksen has continued to show his resurgence is no fluke.

Playing against world champions France, he dominated the midfield against the much-younger and dynamic Real Madrid pair Eduardo Camavinga and Aurelien Tchouameni.

His stats backed up his performance.

Eriksen had 80 touches of the ball, completed eight key passes and over half of the crosses he attempted.

He did not lose the ball while dribbling with it, came out on top in over half of the tackles he made, and his passes found their mark 84 per cent of the time.

That is not to mention his raking ball forward in the build-up for Kasper Dolberg’s opening goal, or his corner which led to the second from Andreas Skov Olsen.

“He has always been someone who has a remarkable technical ability,” Deschamps said. 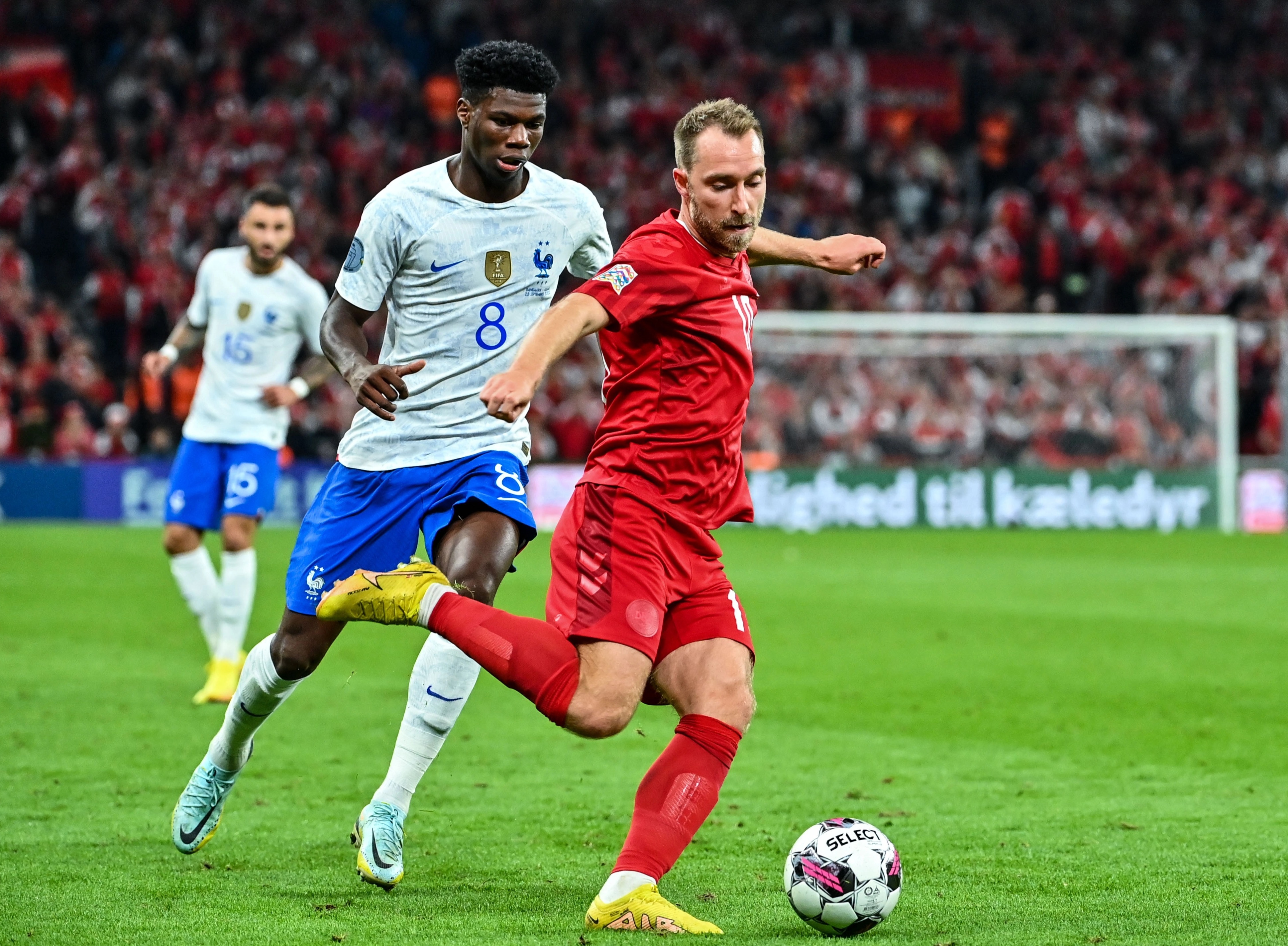 Eriksen bossed Aurelien Tchouameni off the park for Denmark against France 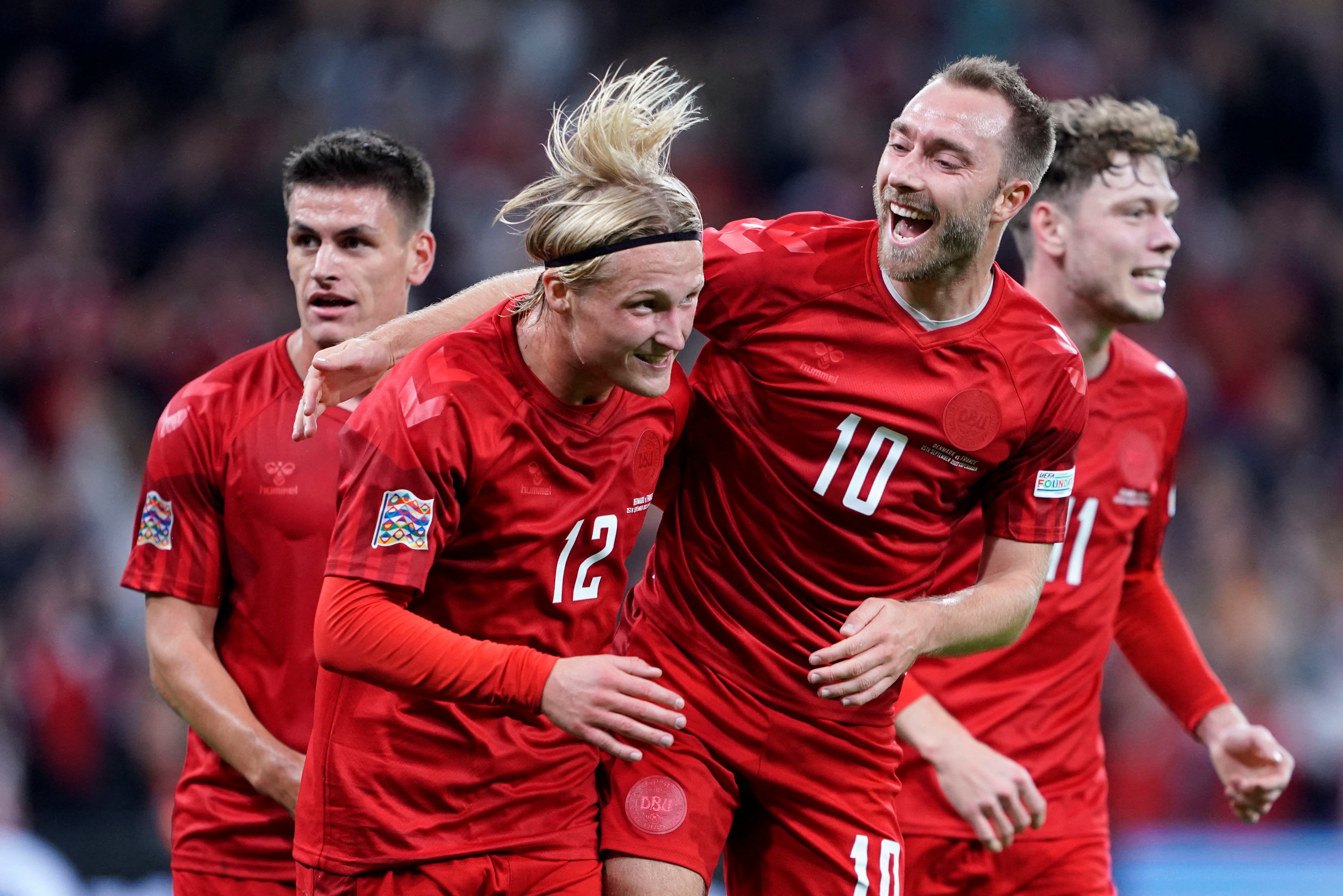 Eriksen celebrates a famous victory over the world champions

“But to play so frequently for his club in the midfield, to see the volume of games he plays, this ability to recover is impressive.”

Impressive is an understatement. Let’s go with a miracle, instead.