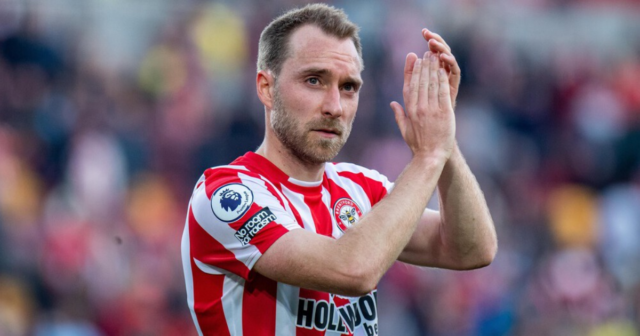 CHRISTIAN ERIKSEN reportedly informed clubs interested in signing him this summer that he wanted a whopping £200k-a-week contract.

The Danish international has verbally agreed a deal to join Manchester United after snubbing the chance to stay at Brentford long-term.

Eriksen, 30, became a free agent this summer after the short-term contract he penned with the Bees in January expired.

And he was demanding a staggering £200k-a-week contract and a £10MILLION signing-on fee from his next club, sources have told the Telegraph.

Brentford had been willing to break their wage structure and make Eriksen their highest paid player by a distance.

That offer and the fact his family are currently settled in London meant the decision to join United was not a straightforward one for Eriksen.

Now though the Danish playmaker has agreed a deal in principle to sign for United.

But the Telegraph go on to claim it’s currently unclear whether the Red Devils met his sky-high demands.

Eriksen’s move to Old Trafford is now subject to a medical, while his exact contract details also need to be finalised.

Eriksen has made an incredible recovery since having a cardiac arrest on the pitch during a Euro 2020 match in June last year.

He was forced to leave Inter Milan after having a defibrillator – which are not allowed in Italy – fitted in the weeks after his collapse.

Eriksen then trained with now United boss Erik ten Hag at Ajax at the start of the year before joining Brentford.

Ten Hag is reportedly hoping for five new additions by the time the new Premier League season gets underway.

Eriksen is set to follow Tyrell Malacia, who was pictured yesterday at Carrington finalising his £13m move, through the doors.

United are also hopeful Frenkie de Jong will arrive too with an initial fee of around £56m agreed with Barcelona.