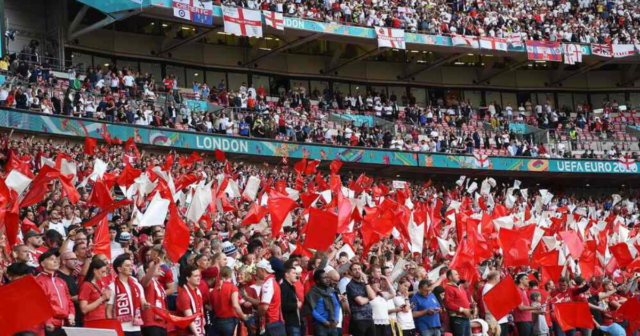 THE Community Shield between Manchester City and Leicester is set to have ‘100 per cent capacity at Wembley’.

The curtain-raiser for the new season will be given the go-ahead to host 90,000 fans.

Wembley’s capacity was restricted during this summer’s Euro 2020

According to talkSPORT, Wembley will be able to host a sell-out crowd for the Community Shield on August 7.

Wembley was allowed at least 22,000 fans for the Euro 2020 matches held at the famous stadium this summer.

More than 60,000 fans were permitted for England’s semi-final against Denmark and the final defeat to Italy.

But the government ignored calls to increase the capacity for England’s first appearance in a European Championship final.

And the final was marred by crowd trouble with ticketless thugs breaking into the stadium.

An estimated 2,500 hooligans barged and blagged their way into the ground for the game which ended in a heart-breaking penalties defeat for England.

It was expected the Community Shield could be limited to 75 per cent capacity despite restrictions being lifted.

But an agreement between the Football Association and the Department for Digital, Culture, Media and Sport has been reached, allowing a full house at Wembley for the Community Shield.

It will be the first time Wembley has held a full crowd since before the pandemic.

Champions Man City will face FA Cup winners Leicester with the Foxes returning to the scene of their final triumph over Chelsea.