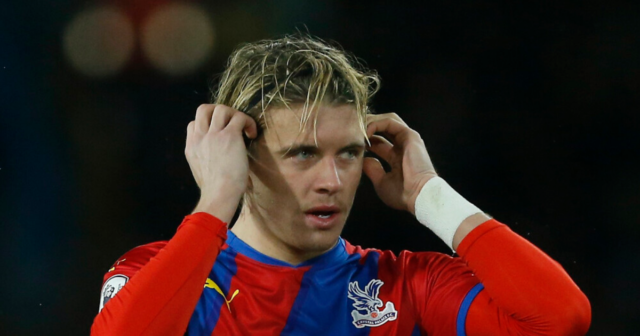 CONOR GALLAGHER has been hugely impressive while on loan at Crystal Palace from Chelsea this season – and he won;t be leaving Selhurst Park any time soon.

Chelsea’s mounting injury list had led to speculation that Gallagher could be on his way back to Stamford Bridge in January, however reports suggest he will be staying put in South London.

Gallagher has been in fine form for Crystal Palace this season

The 21-year-old will see out his loan spell with Crystal Palace that expires at the end of the season, according to football.london.

Gallagher is understood to be willing to return to boyhood club Chelsea should he be called upon, but is not expecting the phone to ring.

Thomas Tuchel though may have been tempted to recall Gallagher given the number of Chelsea stars currently in the treatment room at their Cobham base.

That’s after Gallagher has contributed four goals and provided three assists in 14 Premier League games so far this season from midfield.

And it’s in the middle of the park where Tuchel is currently lacking options.

N’Golo Kante, Jorginho and Mateo Kovacic all missed Wednesday’s 3-3 draw against Zenit, while Ruben Loftus-Cheek was injured in the warm-up.

Ben Chilwell’s injury and a slight knock to Marcos Alonso also meant natural midfielder Saul had to be deployed at left wing-back.

Reece James stepped into midfield from the right, a position he played in while on loan at Wigan in 2018/19.

Kante hasn’t featured since picking up an injury in the 4-0 win against Juventus, while Jorginho has been nursing a hip problem sustained in the game against Manchester United.

Kovacic meanwhile returned to training after a six-week injury lay-off, but tested positive for Covid-19 just a DAY after getting back out on the grass.

No timescale has been given on when Jorginho, Kante and Loftus-Cheek will return, but a recall for Gallagher remains off the cards.

All three though are likely to miss Saturday’s clash against Leeds, with Kovacic definitely out.

Tuchel was quizzed last month on whether recalling Gallagher was an option, with the Blues boss saying: “Actually I haven’t thought about it. I think it is important for him to be happy where he is and not change things.

“It is important to be calm, I feel him happy there and that he is having this impact at Crystal Palace.

“It is too early to talk about that in public before we talk with Conor himself and what his goals are.

“This will happen in the summer as we all agreed to the decision that we wanted to send him to Palace.”