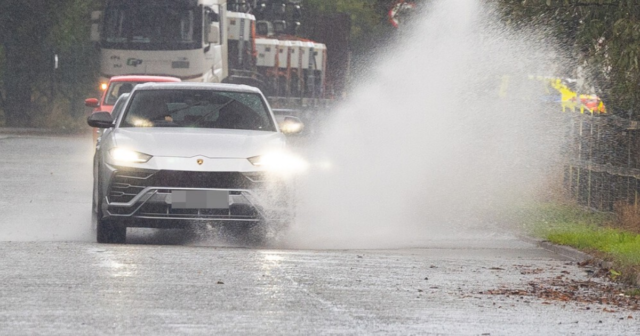 CRISTIANO RONALDO made a splash as he rocked up to Manchester United training in a £160,000 – and soaking wet – Lamborghini.

Friday’s final workout before facing Everton kicked off in damp conditions in the north west.

Cristiano Ronaldo drove through the rain to reach training on FridayThe striker arrived in a £160,000 Lamborghini Urus

It has already been an eventful week for club and player, after Ronaldo’s last-ditch winner in the Champions League clash with Villarreal.

The Portuguese superstar has also been giving his take on his manager’s tactics, reportedly calling for a higher tempo to provide him with service.

Ole Gunnar Solskjaer was nonetheless full of praise for his man ahead of the lunchtime kick-off.

The boss lauded: “[Ronaldo] has had a great impact on and off the pitch.

“Five goals in five games at his age says everything. You’ve got to manage him, he’s a very good example for everyone. Long may it continue.”

Ronaldo was behind the wheel of a Lamborghini Urus, the £160,000 4×4 released in 2018 by the Italian luxury car manufacturer.

A twin-turbocharged V8 engine powers what is described as the world’s first ‘Super’ SUV, which can hit speeds of 189mph.

It is not known whether the Lambo is part of Ronaldo’s extensive personal collection, or if he is renting it having only recently arrived in Manchester.

In May, the Portuguese star shipped a number of his supercars back to Spain amid rumours he would leave Juventus.