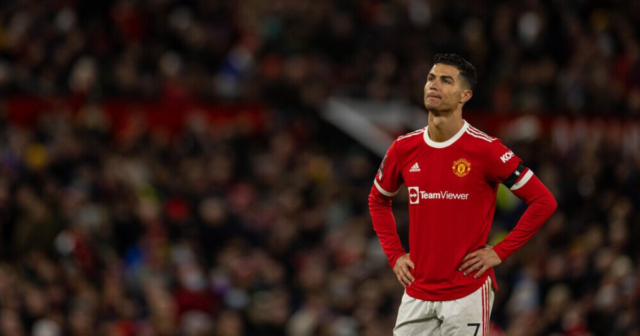 CRISTIANO RONALDO got over his FA Cup penalty heartbreak for Manchester United with a whopping birthday cake.

The Portuguese legend still managed to raise a smile on Saturday to celebrate turning 37 – just a day after Middlesbrough dumped the Red Devils out of the cup.

Ronaldo blew the chance to give United an early lead when he surprisingly drilled a spot-kick WIDE to extend his goalless run to four games.

He and his team-mates were held by the Championship side to a 1-1 draw, but even though he scored in the shoot-out, Boro would go on to stun Old Trafford by winning 8-7 on penalties.

Despite that disappointment, the superstar still managed to raise a smile in a cute photo alongside partner Georgina Rodriguez for his birthday bash.

She effectionally had one hand on the forward’s shoulder and the other around him as he showed off his pearly white teeth while dressed in a black turtleneck.

The couple were sat in front of a huge CR7 cake, and he shared the snap on his Instagram along with a lengthy message.

Ronaldo wrote: “Life is a roller coaster. Hard work, high speed, urgent goals, demanding expectations… But in the end, it all comes down to family, love, honesty, friendship, values that make it all worth it. Thanks for all the messages! 37 and counting!”

Rodriguez revealed this week that she is unbearable when she’s hungry as she admitted she HATES cooking but is not like other Wags because she LOVES eating.

Opening up during a TAROT CARD reading she shared with her Instagram fans, Georgina admitted when asked if she liked cooking: “More or less”.

She then quickly added: “Actually no, what I like doing is eating.”

Quizzed on her favourite dish, the 28-year-old revealed: “It’s difficult to name one.

“I remember once asking for a ham sandwich during a photo shoot before a fashion show and saying, ‘Don’t make me do this when I’m hungry’ because when I get hungry the truth is that I can be a bit unbearable.

“Life without food is a bit senseless to me.

“It’s not normal to ask for ham sandwiches before doing this sort of event and the response I got when I requested one, was ‘I like people who eat, it means they can be trusted’ and that’s what I feel, that when people relax and eat, I think ‘Wow, they like being with me!’