Cristiano Ronaldo is ‘very happy’ at Man Utd and will have a ‘great season’, insists agent Mendes despite transfer links
Advertisement 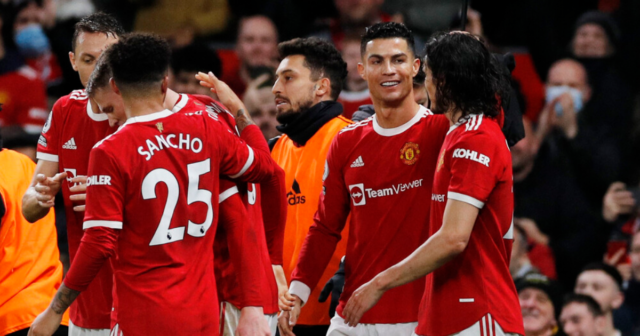 And the superagent added the Portuguese forward will have a ‘great season’ and continue his goalscoring form.

There had been murmurings of discontent surrounding Ronaldo and suggestions he may leave the club, just months after his stunning return in the summer.

One Spanish newspaper joked the five-time Ballon d’Or winner was even open to joining Real Madrid’s arch-rivals Barcelona in an April Fool’s Day-style report while a return to the Bernabeu has also been mooted.

But on the day Ronaldo inspired Ralf Rangnick’s side to a 3-1 win over Burnley, Mendes reiterated his client’s commitment at Old Trafford.

“He’s going to continue with his solid, great performances as always in his career.

Ronaldo should have fired United into an early lead against Burnley but he blazed over when through on goal.

But after Scott McTominay’s finish and Ben Mee’s own goal, Ronaldo tapped in a rebound to wrap up the win.

Ronaldo has now scored 14 goals in 21 appearances for the Red Devils this season.

That includes four in his five Premier League games in December as United continue to challenge for a top-four finish.

But there is still many who believe the match is not good news for the club.

His body language during Monday’s 1-1 draw at Newcastle – moaning and berating team-mates then sulking down the tunnel – left Gabby Agbonlahor fuming at the forward’s treatment of younger players.

The ex-Villa striker said: “That performance from Ronaldo was somebody sulking all game. His attitude was off.

“The harmony is not right in that changing room. The form of Rashford and Greenwood has dropped since Ronaldo has been there.

“If I’m Rashford, Greenwood and Sancho I’m scared to have a shot. Every time they have a shot he’s got his arms up to say, ‘Why haven’t you passed to me?’

And there has also been rumours of a power struggle between captain Harry Maguire and Ronaldo, who skippers Portugal and is one of the greatest players of all time.