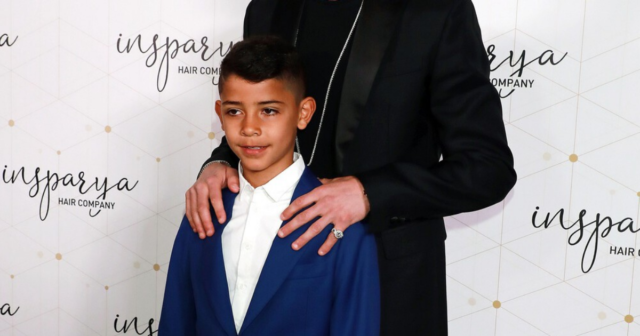 CRISTIANO RONALDO has not given his 11-year-old son a mobile phone – so he doesn’t get ‘obsessed with technology’.

The Manchester United forward revealed he fears his son Cristiano Jr will be hooked if he has a phone, like many of his generation.

A recent UK study found most children own a mobile by the age of seven and revealed nine out of ten children have their own device by age 11.

Asked at the Al Wasl Plaza in Dubai whether technology had helped him become a football star, Ronaldo said: “Definitely it helps a lot.

“It helped me and the people here, all the world, and I think we have to take advantage of that but we shouldn’t be obsessed with it.

“For example, I can give you a small impression.

“I know as well that this young generation are one step ahead of their age so I agree that we have to take advantage of that but not to be obsessed about technology.

“Give them but with a period of time, not give them all the time. I think that’s the main point here.”

Cristiano Jr turns 12 in June and is the eldest of Ronaldo’s four children – with Georgina currently pregnant with twins.

The five-time Ballon d’Or winner said he refused the youngster’s request for a phone four years ago.

At the time, the Portugal icon said: “Junior is very happy and says he wants more brothers and sisters, he wants seven.

“I ask him to wait for the future. One day, Junior asked me for an iPhone to call me but I told him no. If he wants to call me he should through his grandmother.

“I want to transmit to my son the idea that it’s not easy getting anything he wants. Education is the best thing I could give him.”

The report by Childwise made public in January 2020 revealed 90 per cent of children had their own device by the time they were 11.

The report, based on a survey of 2,167 UK five-to-16-year-olds, also found 53 per cent of youngsters owned mobile phones by around the age of seven.

Cristianinho, born to an anonymous surrogate mum before his footballer dad met current partner Georgina Rodriguez, features prominently in the Netflix show ‘I Am Georgina’ about her rags-to-riches journey.

In one scene she jokes about telling the youngster he has to introduce her to his girlfriend after it emerges he is already dating.

Did you miss our previous article…
https://www.sportingexcitement.com/football/premier-league/pierre-emerick-aubameyang-should-snub-juventus-and-barcelona-transfers-for-everton-says-ex-arsenal-ace-jermaine-pennant