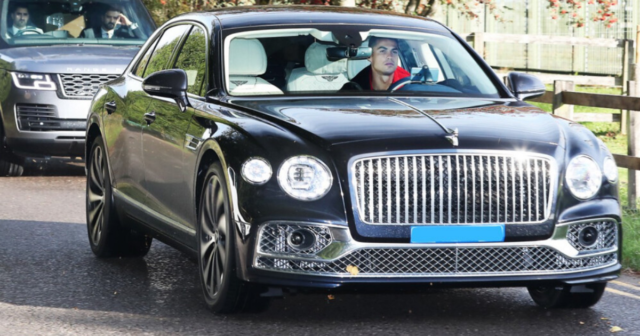 A new club, a new motor for CRISTIANO RONALDO.

The Manchester United star has added a £250,000 Bentley Flying Spur to his staggering car collection.

Cristiano Ronaldo drives his Bentley Flying Spur to training with Manchester United
Ronaldo is also believed to be one of 10 people lucky enough to buy the incredible Bugatti Centodieci, which costs £8.5m 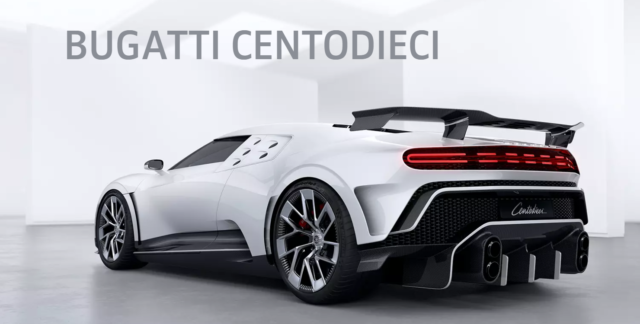 The amazing Bugatti is truly a one of a kind motor 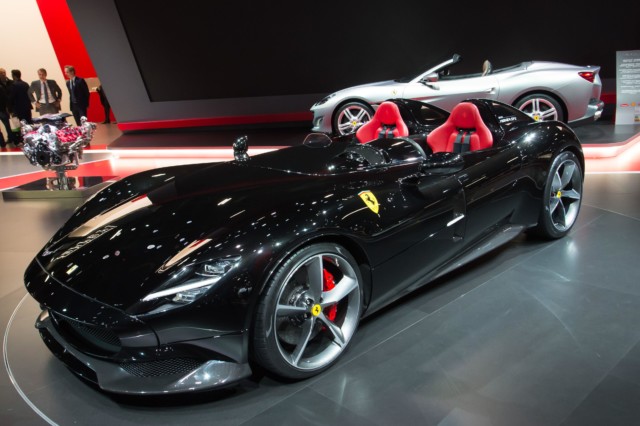 Ronaldo has reportedly spent £1.4m on an amazing Ferrari Monza

It joins a limited edition £8.5million Bugatti Centodieci – of which only ten have been made, he added to his incredible fleet last year.

Ronaldo, 36, took his new motor for a spin as he arrived to training at United’s The AON Carrington Training Complex.

While in 2020, he was spotted taking a tour of Ferrari’s Maranello company, where he posed for a picture with a F1 car and ordered himself a Ferrari Monza worth £1.4million.

That puts his car collection now at around roughly £17million – with Bugattis being his favourite.

Five-time Ballon d’Or winner Ronaldo has a Bugatti Chiron and a Bugatti Veyron Grand Sport Vitesse as part of his huge hoard.

He has ‘CR7’ embroidered on the headrests of his other two Bugattis, but his latest model he bought is believed to be a tribute to the legendary Bugatti EB110 – Centodieci is Italian for 110.

The Centodieci boasts an 8 litre W16 engine, with special models having 1600hp – some 100hp more than the Chiron and, overall, three times the price of that model.

The Portuguese superstar has supercars likes Ferraris, Lamborghinis and Rolls Royces, admitting to Piers Morgan in an interview he likes to have two of everything.

Join SunSport in revelling in just some of Ronaldo’s collection that his fortune can afford.

What do you buy your boyfriend if he has everything?

Well if you’re Georgina Rodriguez you get a massive, gift-wrapped Mercedes-Benz G-Class.

The gorgeous former shop assistant made sure CR7’s had the best 35th birthday ever – gifting him a stunning Mercedes G Wagon Brabus that can cost as much £600,000.

And the brilliant SUV can reach top speeds of 137mph. 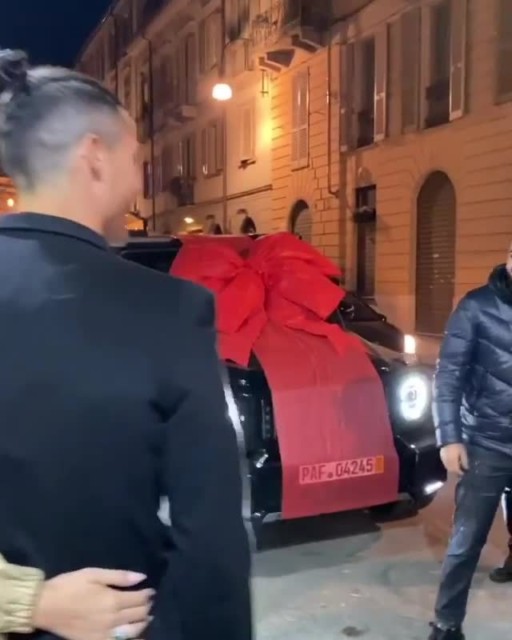 In 2017, Ronaldo’s need for speed saw the mercurial forward splash the cash on a stunning silver Bugatti Chiron.

Incredibly, it can reach speeds of 260 mph, and does 0-60 in just under 2.5 seconds, not that Turin will allow him the opportunity to drive it that fast with the city’s busy traffic.

As we said, he likes two of everything – and this was the second Bugatti he bought, although he has denied buying a third  – the Bugatti La Voiture Noire – which was reckoned to be the most expensive car in the world EVER at £9.49million, and was snapped up by a mystery buyer last year. 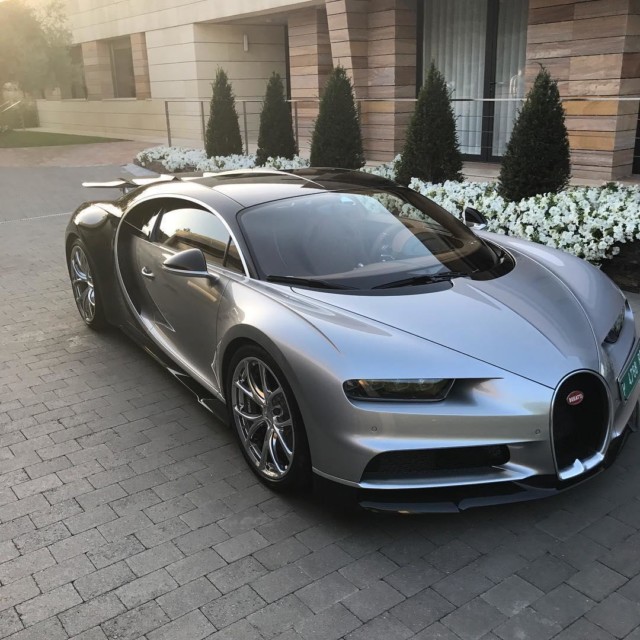 The 36-year-old loves posting images of his cars to social media, including the Bugatti Chiron

Only 450 Veyron 16.4 Grand Sports were built, so of course Ronaldo wanted a slice of that rarity pie.

It cost him £1.7m, and will only increase in value as the years go by.

The Portuguese legend bought the car as a treat after winning Euro 2016 with his country.

In terms of performance, it does 0-62 mph in 2.6 seconds, and has an outer skin completely made of carbon fibre. 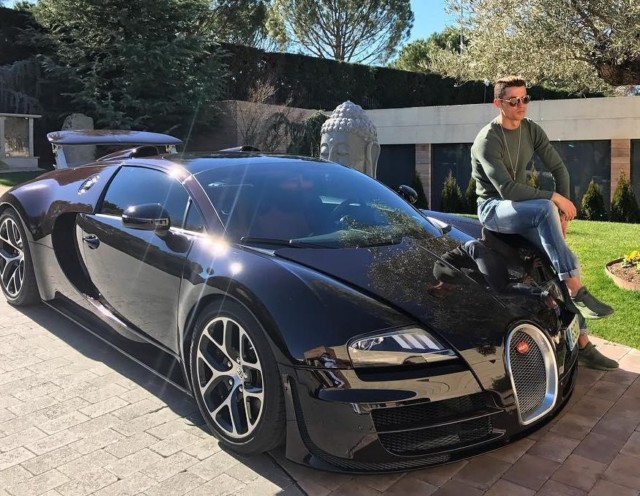 Cristiano Ronaldo poses outside his former Madrid home on his £1.7m Bugatti Veyron

Simply because a Bugatti Veyron won’t fulfil Ronaldo’s love of fast cars, in the same year he bought that motor he splashed on a Lamborghini Aventador.

Made in 2011, it’s the most celebrated model by the Italian car designer – and owned by footballers all over the world, not scared of the outlandish price.

Ronaldo celebrated his purchase on Instagram in 2016, with a picture with the caption: “Bom dia (good morning)”. 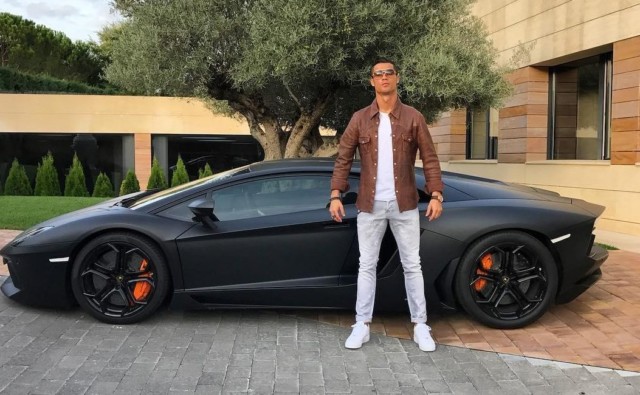 Ronaldo has a matte-black Lamborghini Aventador worth over £200k 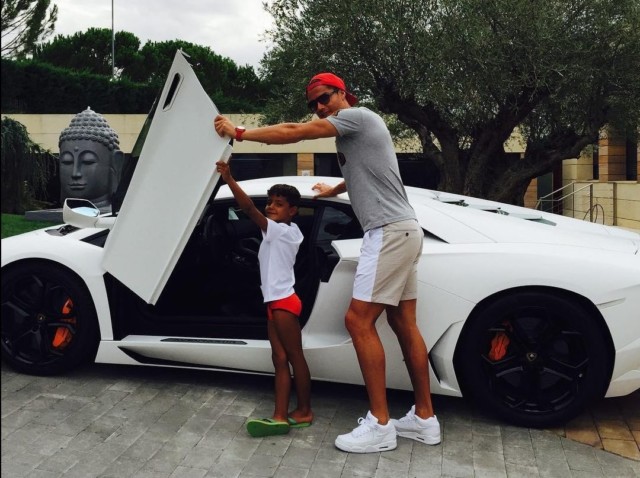 Last year Ronaldo added a Cullinan to his collection, having previously owned a Rolls Royce Phantom worth around £363,000.

Showing his loyalty to his new employers, CR7 even personalised the interior with black and white leather.

Standing at five metres long, the Cullinan boasts a V12 engine and a horse power of 571.

It is the only SUV Rolls Royce have ever produced. 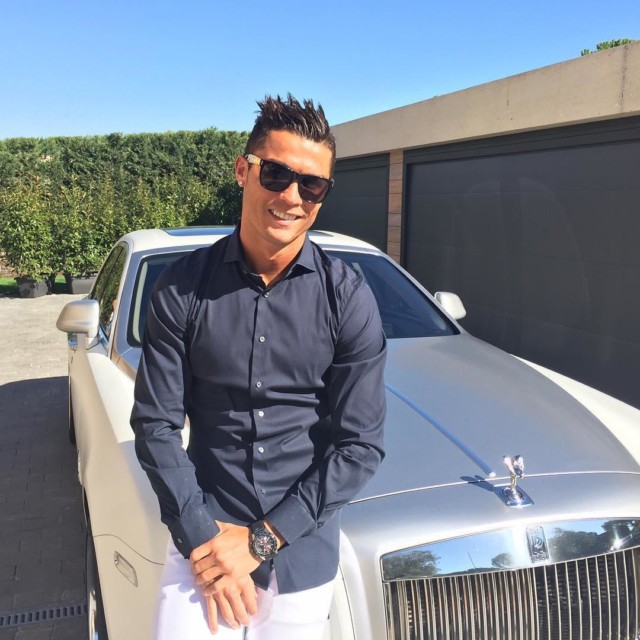 Maybe he learned something from Sir Alex Ferguson about American cars, after all the former Manchester United boss drove a Chevrolet to training when he was Red Devils manager.

A more economic motor than others in his garage, the Camaro has a 6.2-litre V8 engine that delivers 453 horsepower.

It’s cheaper than anything else he owns, and was bought in 2016 as a family car. 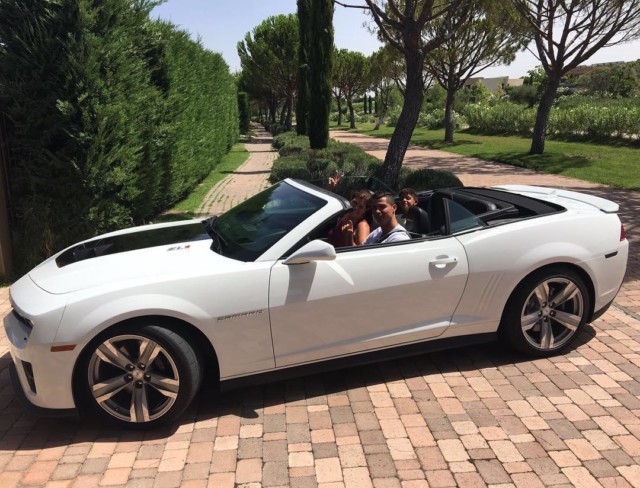 It is certainly one of the favourites he owns, and is zippy with a top speed of 211 mph, and capable of doing 0-62 in 2.9 seconds.

Needless to say, pet-friendly Ronaldo won’t let his pooches in though. 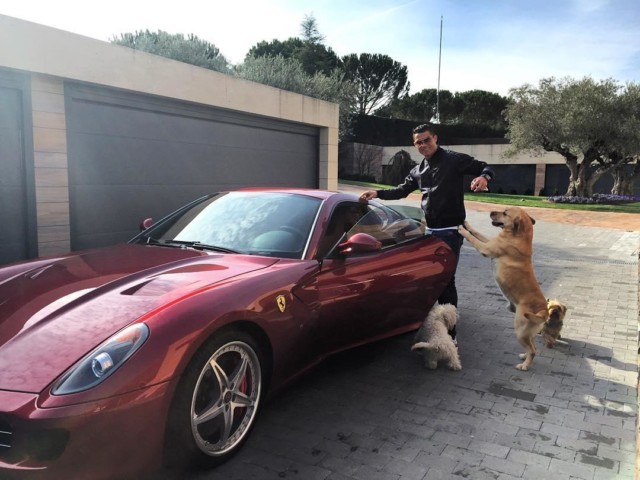 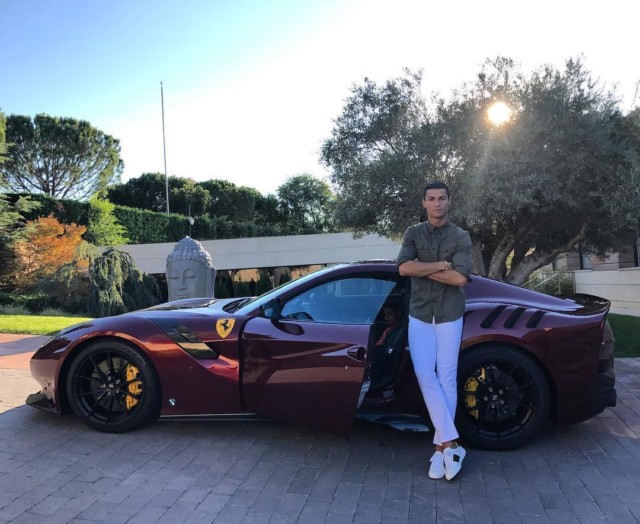 The Ferrari F12 is one of Ronaldo’s favourites 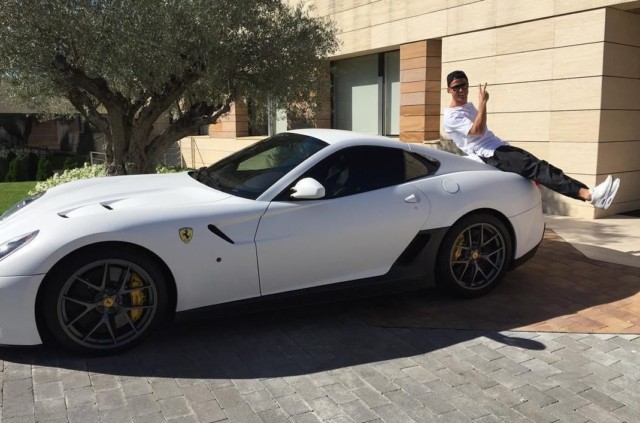 Ronaldo poses on the boot of one of his white Ferraris

A staple for every footballers’ garage, the Range Rover Sport is the ultimate SUV for the rich and famous.

The model that Ronaldo drives is, of course, is the special edition, SVR.

It’s Ronaldo’s go-to motor when he drives to the Continassa training ground in Turin. 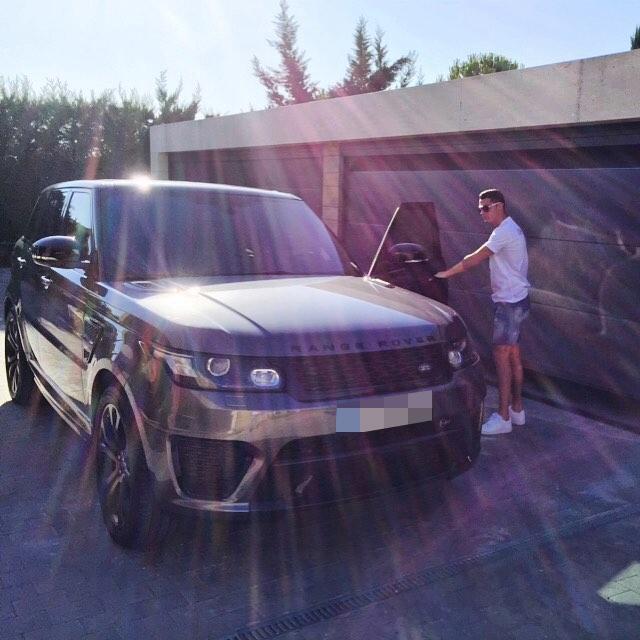 In 2016 Ronaldo filled his garage with supercar after supercar.

His AMG GLE 63 was a gift to himself for Christmas, and some present it is. 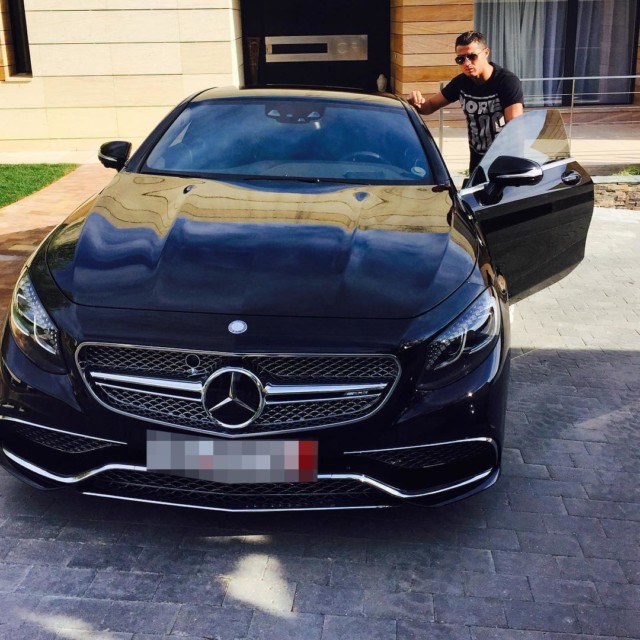 Ronaldo has one of the most impressive car collections in football

A car made as a dedication to the legendary Brazilian racing driver Ayrton Senna, it would’ve set Ronaldo back around £1million – with only 500 models ever made.

So enamoured by its performance on Top Gear, former presenter Jeremy Clarkson said of the McLaren Senna it has ‘rewritten the supercar rule book’.

Mika Hakkinen is another sports star who owns one of these beauties. 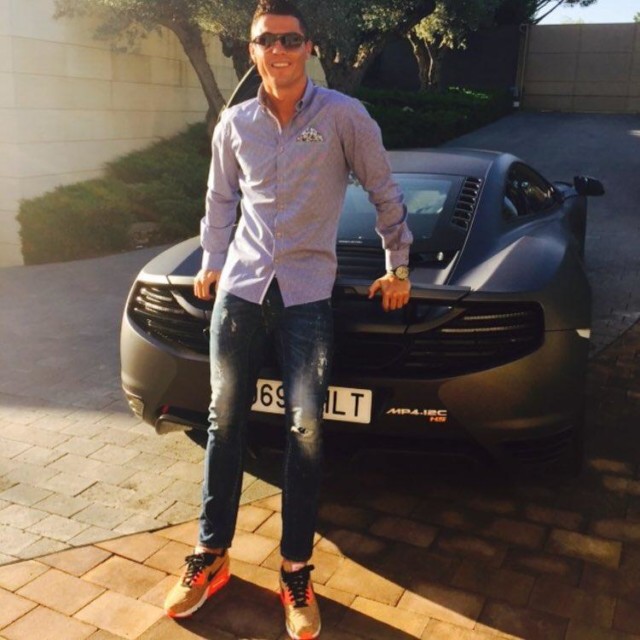 Ronaldo is believed to have started collecting cars from around 2009, when he was a Manchester United star.

He had a penchant for Bentley Continental GTs in those early days, and collected several during his time at Old Trafford.

Ronaldo’s was the GT Speed model, which was naturally the most expensive version ever.

The interior was lush, filled with magnolia leather.

And because it was a convertible, Ronaldo was often spied with the roof down – even in rainy Manchester. 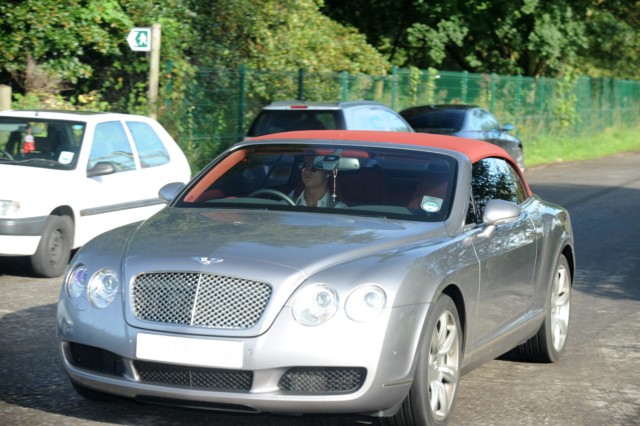 Ronaldo began to have a collection of supercars during his time at United, including this Bentley convertible 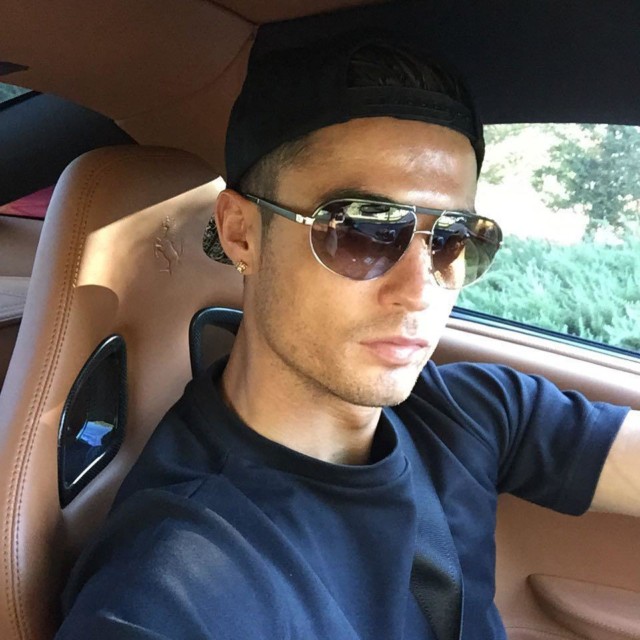 Ronaldo’s car collection is worth around £17m

Did you miss our previous article…
https://www.sportingexcitement.com/football/premier-league/liverpool-flop-loris-karius-offered-career-lifeline-by-basel-as-swiss-giants-launch-second-bid-for-outcast-goalkeeper