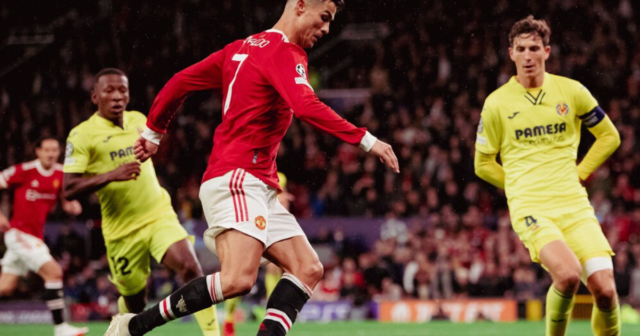 The Portuguese, 36, hit the back of the net in the 95th minute – two minutes later than Ole Gunnar Solskjaer’s strike in the 1999 final.

Man Utd were heading for a 1-1 draw with the Europa League champs at Old Trafford before Ronaldo produced a trademark moment.

The forward got on the end of a decent Fred delivery, heading the ball into the path of substitute Jesse Lingard.

The England winger then passed it straight back to Ronaldo for him to fire beyond Villarreal goalkeeper Geronimo Rulli.

Exactly 94 minutes and 13 seconds were on the clock when the ball hit the net – and two seconds later, Ronaldo’s top was off in celebration.

And manager Solskjaer, Usain Bolt and everyone else supporting the Red Devils inside Old Trafford went wild as a 2-1 victory was sealed.

The goal also buried any demons from Man Utd’s defeat to Villarreal in May and Lingard’s late mistake against Young Boys two weeks ago.

It’s the latest the Manchester club have scored in the Champions League, beating the previous record set by current boss Solskjaer 22 years ago.

The Norwegian’s was a little bit more important, though, as his 93rd minute winner against Bayern Munich handed Man Utd the UCL trophy.

And it wasn’t the only record Ronaldo broke on Wednesday. He also became the first man to make 178 appearances in the Champions League.

Speaking after Ronaldo’s winner, Solskjaer said: “That is what happens at Old Trafford. It has happened so many times before.

“When you have Cristiano on the pitch you always have a chance. He is so good in front of goal and he has an impact on everyone.”