Cristiano Ronaldo’s Man Utd team-mates from 2003 debut included Djemba-Djemba & Fortune… but where are they now?
Advertisement 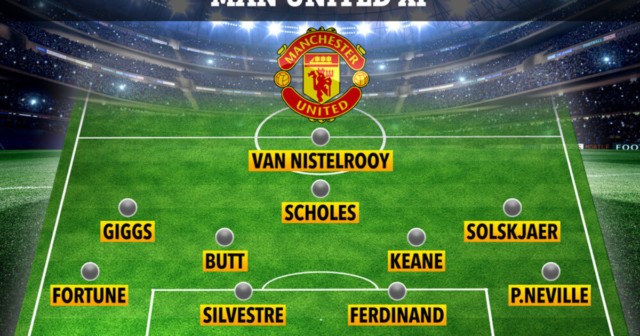 THE 2003-04 season wasn’t the finest of Sir Alex Ferguson’s Old Trafford reign – but the emergence of Cristiano Ronaldo still made it one to remember.

Manchester United came third in the Premier League and crashed out of the Champions League at the last-16 stage to Jose Mourinho’s Porto (although they did win the FA Cup).

Cristiano Ronaldo skipped past challenge after challenge on his United debut

After a turbulent off-season that saw Ferguson lose David Beckham and Juan Sebastian Veron – as well as miss out on Ronaldinho – the Scot took his side to Portugal for a friendly with Sporting CP.

And a scrawny Portuguese teenager impressed Sir Alex so much, that five days later he had signed him for £12.5million

Just four days later Ronaldo – now back at Old Trafford for a second stint – was included on the bench for his new side’s Premier League season opener at home to Bolton.

He replaced Nicky Butt after 61 minutes – and the skinny 18-year-old was electrifying, bamboozling the visiting defence and giving the Stretford End a new hero.

Here, SunSport takes a look at what became of those that featured alongside Ronaldo that day.

The keeper is a legend of US soccer, but Howard never quite convinced that he had what it took to be a Man United No1, despite making 77 appearances for Sir Alex’s side.

He departed for Everton in 2006 after falling behind Edwin van der Sar in the pecking order and went on to star for the Toffees – appearing 413 times and achieving cult hero status at Goodison Park.

Last year, aged 41, he came out of retirement to playfor Memphis 901 FC – the team he owns – for a season, before retiring. 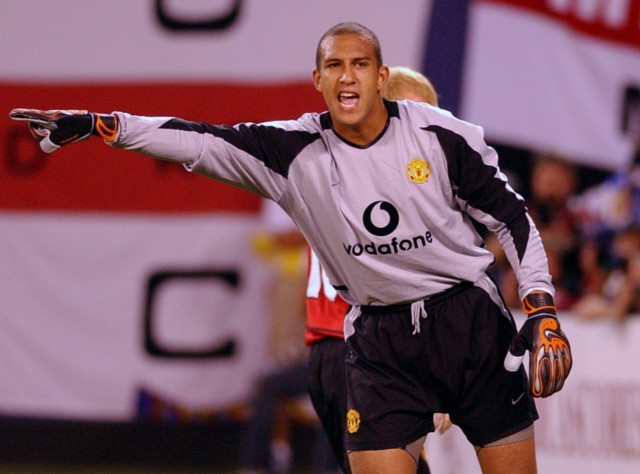 Tim Howard made 77 appearances for United

Another who left Old Trafford for Everton to become a key man rather than a mere squad player.

Sir Alex Ferguson actually played a big role in his United exit, and Neville said: “He didn’t seem like a manager. It was more like a father speaking.

“It was beyond a manager looking after his club, anyway, because he could have kept me for being what I was good at, being a squad player. But he realised I needed more than that.”

Neville went on to captain Everton, making 303 appearances before retiring.

The two formed a formidable partnership at the back, winning three consecutive titles in the Serb’s first full seasons with the club.

Ferdinand left in 2014 for an ill-fated stint with Queens Park Rangers after 455 appearances, six league titles and a Champions League at Old Trafford.

He has since embarked on the world’s briefest boxing career and now offers his opinions on the Red Devils as a BT pundit, while hosting his own YouTube show. 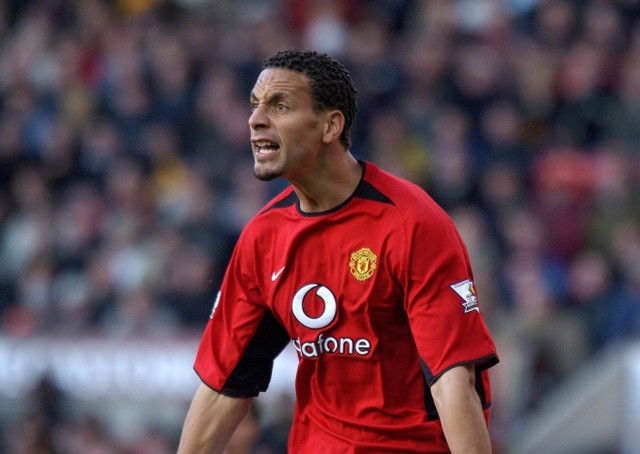 The Frenchman hasn’t gone down as an Old Trafford great, but was a regular for Sir Alex’s side around this period.

He was eventually fazed out before being allowed to join Arsenal in 2008, but did manage an impressive 361 outings over a nine-year period for the club.

Silvestre retired in 2014 after spells with Werder Bremen, Portland Timbers and Chennaiyin FC.

He is now an ambassador global network of sports professionals Playon, and has studied for his Uefa A Licence coaching qualification and a sports management degree.

More of a centre midfielder, the South African was never going to nail down that position ahead of the likes of Roy Keane and Paul Scholes – but he did manage to carve out a squad position for himself as a left-back.

Fortune didn’t set the world alight at Old Trafford, and had a nomadic career after leaving – turning out briefly for Bolton, Brescia, AFC Tubize and Doncaster.

He was clearly well thought of at United though, as he returned back there now in a coaching capacity working with the club’s Under-23s.

Fortune is currently a technical coach at Championship outfit Reading. 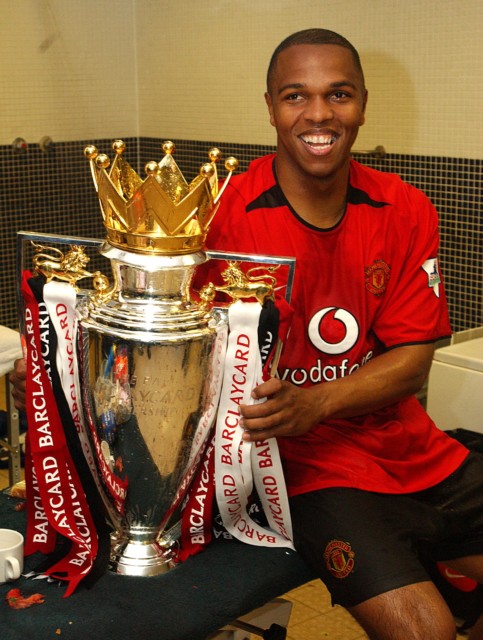 Solskjaer will always be a legend at United for his 93rd minute winner in the 1999 Champions League final, sealing the historic Treble for Sir Alex’s men.

His hero status will never change, whether he is a success in the dugout or not.

The Norwegian’s latter years at United were injury-hit, but he managed 127 goals for the club between 1996 and 2007 – none more priceless than that late, late strike in Barcelona.

And he can now be found in the Old Trafford technical area having taken over as manager in 2018. 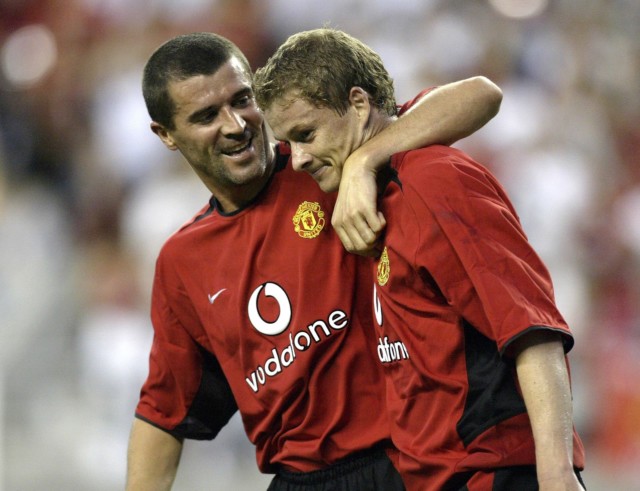 A lesser-spoken-about member of the Class of 92 Butt, like Phil Neville, decided to leave United after over a decade in the first team to try his hand at being a key man.

He handed in a transfer request in January of that season, eventually securing a move to Newcastle United in the summer.

Butt finished his career in England in the second tier, however, after being relegated with the Magpies in 2009. Butt brought the curtain down following a brief spell in Hong Kong with South China.

Butt is now head of first-team development back at United, as well as a co-owner of League Two side Salford.

A bona fide club legend, Keane is one of the most iconic figures that has ever appeared in English football.

The combative leader was approaching the end at this point, but there were still fireworks to come – not least when facing Arsenal counterpart Patrick Vieira.

The Irishman ended up leaving Old Trafford under a cloud in November 2005 after an infamous MUTV rant that never made it to air. Retired after a brief spell at Celtic.

Having assisted Martin O’Neill as coach with Ireland and Nottingham Forest, Keane is now most often found rating, and more often slating, Premier League stars on Sky Sports or ITV. 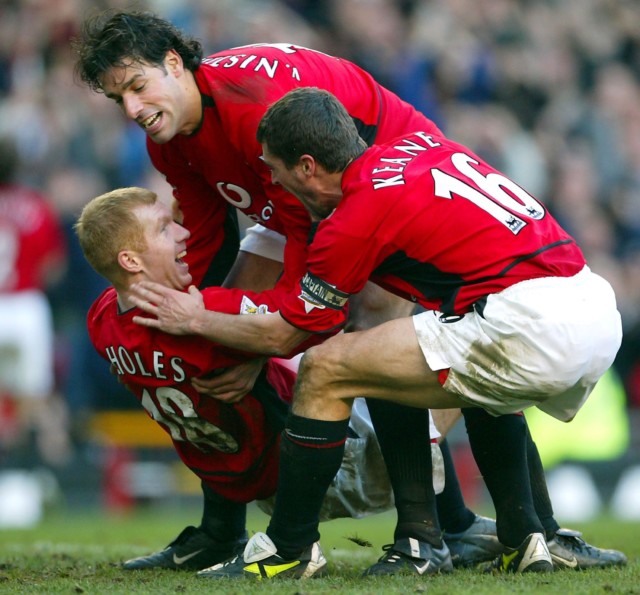 All three of these men tasted Premier League glory

Possibly the most popular player in United’s illustrious history after making an astonishing 963 appearances for the club between 1991 and 2014.

The Welshman set records that will almost certainly be beaten, winning 13 league titles, four FA Cups, three League Cups, two Champions Leagues… and even a Sports Personality of the Year.

At this stage Giggs was still an electric winger, before remoulding his game into that of a deep-lying midfielder later in his career.

Having been assistant to Louis van Gaal at Old Trafford, Giggs now manages the Wales national team, but was ordered to stay away for Euro 2020 – replaced by Rob Page – following his assault charge. 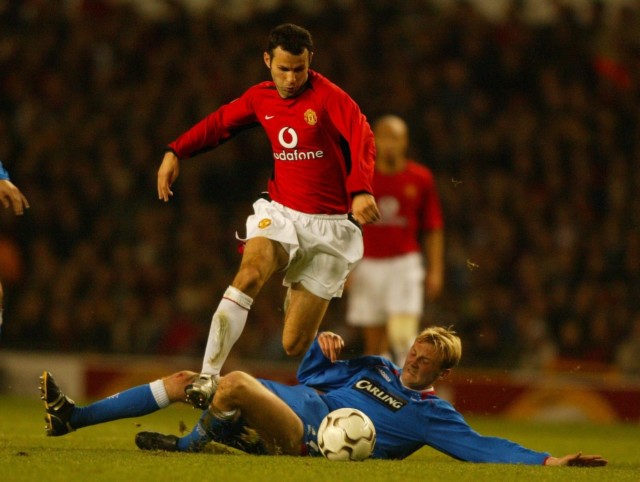 Giggs was still a flying winger back in 2003

Behind only Giggs and Sir Bobby Charlton in United’s all-time leading appearance makers list, having made 718, Scholes went on to retire from England duty after Euro 2004, thus prolonging his Old Trafford career.

His range of passing became a thing of legend as he got older, and he even came out of retirement in January 2012 to play for another 18 months – winning a further league title before calling it a day for real in 2013.

Had a brief spell managing boyhood club Oldham Athletic in 2019, while he is also a co-owner of Salford. Scholes does punditry work for BT Sport. 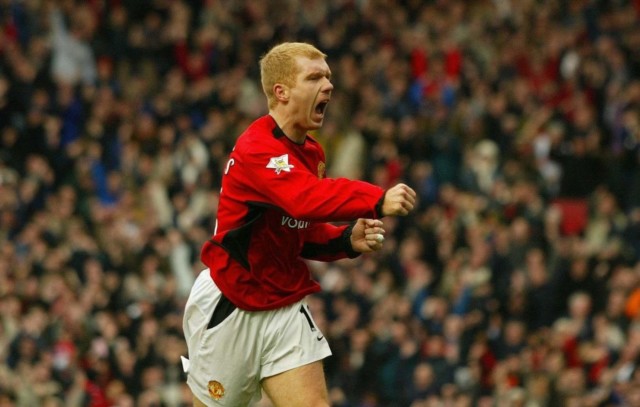 In his five years at Old Trafford, Van Nistelrooy became one of the most lethal goalscorers English football had ever seen.

Eyebrows were raised when he was allowed to join Real Madrid in 2006, for whom he scored 64 goals in 96 games, but Ronaldo and Wayne Rooney were allowed to shine even more brightly after his departure.

He then ended up playing with Ronaldo again for a year in Madrid, before being sold on to Hamburg. 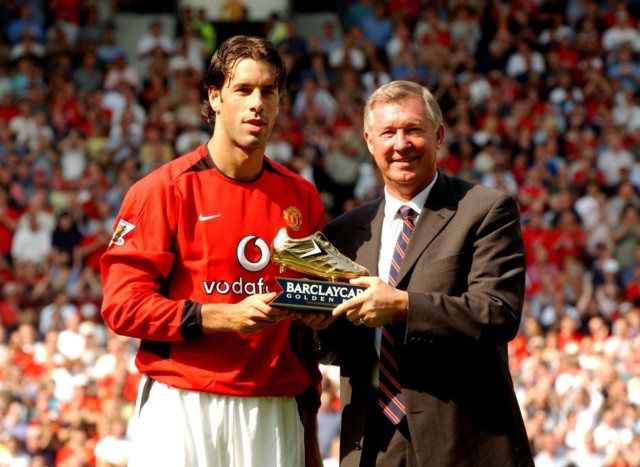 After CR7 was introduced in the 61st minute, Ferguson was to turn twice more to his bench.

Eric Djemba-Djemba came on six minutes later but he failed to make an impact at Old Trafford – leaving in January 2005 and going on to represent Aston Villa and Burnley in England before moving overseas.

He only made one brief return to these shores, appearing three times for St Mirren in 2014 – he most recently turned out for Swiss fifth-tier side FC Vallorbe-Ballaigues. 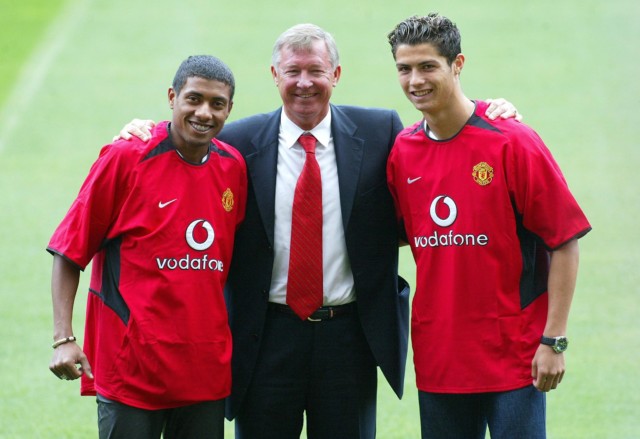 United’s other replacement that day was Diego Forlan, a ‘what if?’ man at Old Trafford.

The skilful long-haired goal-getter didn’t quite make the cut at United, but proved to be a terrific player later in his career with Villarreal, Atletico Madrid and Uruguay.