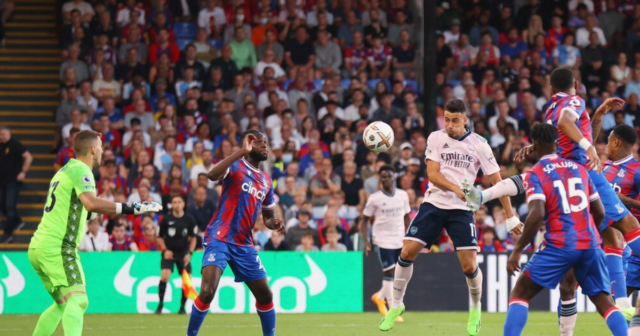 GRITTY Arsenal showed that they are no longer going to be a soft touch as they launched the new Premier League season with a hard-earned victory.

Gabriel Martinelli’s 20th minute header and a late Marc Guehi own goal were enough to ensure there was no repeat of last year’s opening day embarrassment at Brentford.

And while this backs to the wall triumph won’t exactly have the title contenders quaking in their boots, at least it proved that Mikel Arteta’s youngsters have grown some backbone.

But last night they showed their mettle as they stood tall to defy up and at ‘em Palace.

Arteta has been widely derided for the motivational tactics revealed by the All or Nothing documentary which have earned comparisons to Ted Lasso and David Brent. 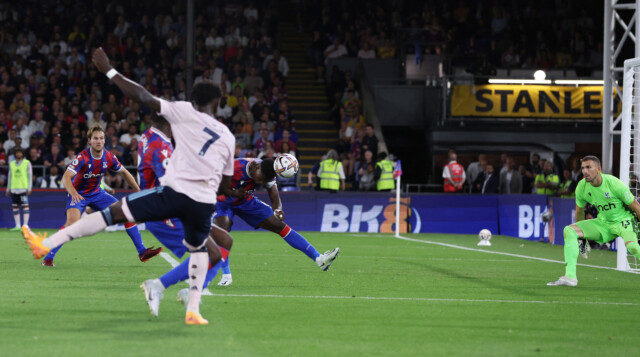 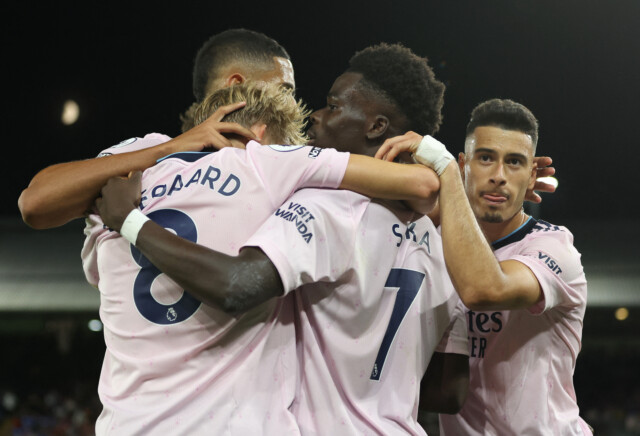 But he clearly got his team talk spot on this time as his young scrappers rolled up their sleeves to grind out the victory which leaves them top of the table for at least a few hours.

And no-one epitomised that endeavour more than Gabriel Jesus, the Brazilian street fighter who ran himself into the ground to ensure his Arsenal career got off to  the best possible start.

With seven goals in five pre-season games, Jesus has been in scintillating form since completing his £45million move from Manchester City.

And it didn’t take him long to find his feet in his first competitive game for his new club as he danced through three tackles to set up a glorious fourth minute chance for Martinelli.

Unfortunately for Arsenal, Martinelli could not apply the finish his compatriot’s work deserved as he drilled his shot wide of the far post.

Oleksandr Zinchenko, Arteta’s other big summer signing from City, was just as quick to make an impression with a fierce shot which stung the palms of Palace keeper Vicente Guaita.

Palace, though, were not rolling out any red carpets as they made sure this Premier League curtain raiser was every bit as physical as the last time Arsenal had visited Selhurst Park in April.

The memory of that 3-0 defeat was still fresh in Arteta’s mind when he warned his players that a repeat performance would not be acceptable this time.

And that message was not lost on the visitors when they gave themselves a bit of breathing space with a well deserved opening goal.

Bukayo Saka’s deep corner was headed back into the mixer by Zinchenko and Martinelli escaped his marker to nod home from close range.

And it was clear they were missing the creative touch of Conor Gallagher, whose return to Chelsea after last season’s successful loan spell has left a gaping hole at the heart of their team. 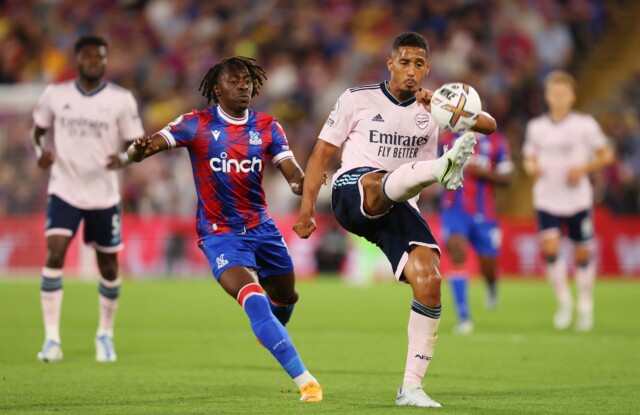 William Saliba was a standout performer on his Arsenal debut, three years after joining 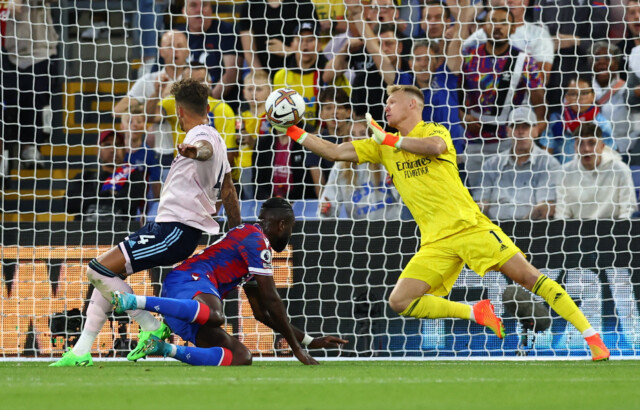 Their build-up to the new campaign had hardly been helped by the fact that Patrick Vieira had only been able to take ten senior players on the pre-season tour of Australia because of Covid regulations.

Yet they gradually picked up the pace and almost levelled three minutes before half-time when Odsonne Edouard’s powerful header was clawed away by Aaron Ramsdale.

It was the first time Ramsdale had worn the number one shirt following Bernd Leno’s recent move to Fulham and that save would not have been lost on watching England boss Gareth Southgate.

Another Edouard effort was diverted over by a last-ditch intervention from Granit Xhaka, who had just collected the first yellow card of the season for diving.

Let’s hope that one doesn’t spark an investigation by the National Crime Agency.

But it was clear that it was Palace who were now on the front foot and the big question was whether Arsenal could find the resilience to dig in.

They should have been punished when Ben White’s loss of possession allowed Wilfried Zaha to thread an inch-perfect pass into the path of Eberechi Eze.

But the youngsters attempted 52nd minute finish lacked real conviction and Ramsdale was able to make another crucial save. 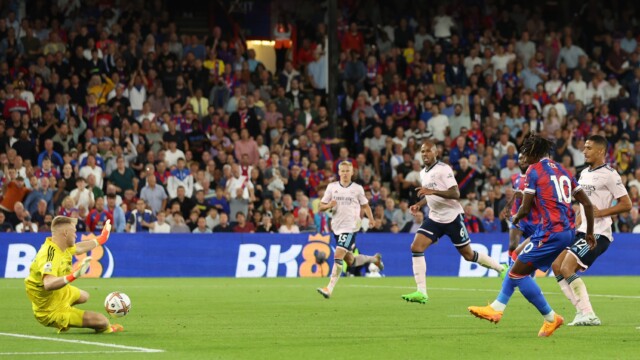 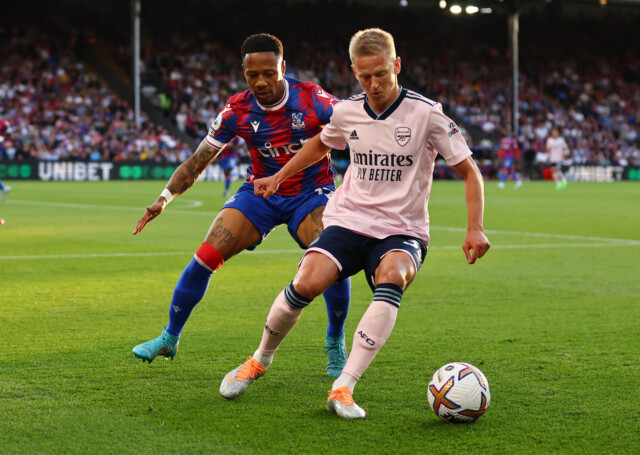 William Saliba, finally making his Premier League debut three years after joining Arsenal, was a towering presence at the heart of the visitors’ defence.

Gabriel Magalhaes almost sliced a clearance into his own goal and White was booked for pulling Zaha back as Palace really started to turn the screw.

But any comeback hopes were ended in the 83th minute when Saka fired in a cross and Guehi could only head the ball into his own net as he tried to clear.

There’s little doubt that Arsenal have improved as a result of their summer transfer activity, but so have all four of the teams who finished above them last season.

So now the challenge is to come up with a way to keep securing important results like this. 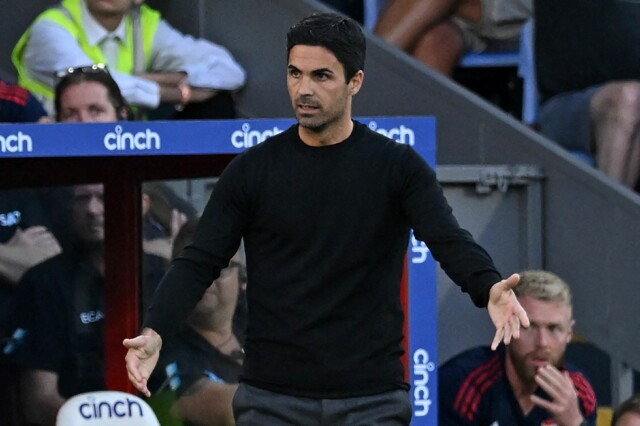 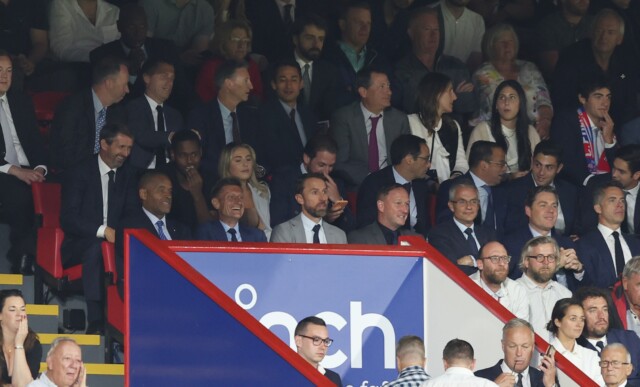