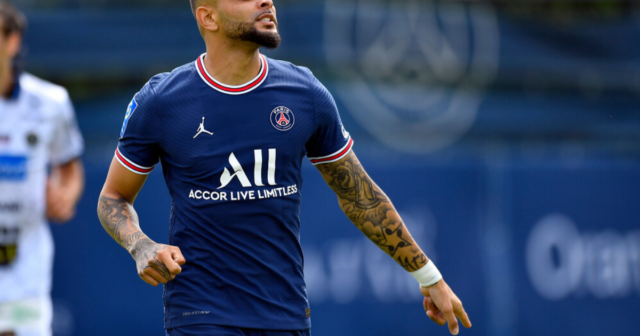 CRYSTAL PALACE are planning a move for Paris Saint-Germain star Layvin Kurzawa, according to reports.

The Eagles have made a slow start to the season under new boss Patrick Vieira.

Kurzawa has reportedly been offered to Crystal Palace

Palace have just one point from their opening two Premier League games, drawing 0-0 at home to new boys Brentford after a 3-0 loss to Chelsea.

They went out of the Carabao Cup on Tuesday, going down 1-0 at Watford.

And despite making seven summer signings already in the hope of turning Palace’s fortunes around, boss Vieira is now eyeing Kurzawa.

According to FootMercato, former Nice boss Vieira is ready to dip back into the French league market and try to sign the left-back, who has drawn attention in the past from Manchester United, Chelsea, West Ham and Spurs.

And sources in the French capital claim Kurzawa’s advisors have offered him to Palace.

The deposed serial champions are expected to seek around £11million for him.

Born at Frejus on the French Riviera, he spent eight years with Monaco before a £20m move to the Parisians.

The 28-year-old has won a dozen major trophies, including four Ligue 1 titles, since joining PSG back in 2015.

He has won 13 France caps, scoring one goal, and is under contract with PSG until 2024.

However, his first-team prospects look bleak this season under former Tottenham boss Mauricio Pochettino leaving the door open for a move away.

Strengthening Palace’s defence isn’t the only area boss Vieira is looking to improve.

The south London side have looked toothless in the final third, and Vieira wants to bring in a midfielder and a striker.

In his pre-match press conference ahead of the 0-0 stalemate at Selhurst Park against Brentford, Vieira confirmed the club are still working hard to bring in new faces, including a striker and a midfielder.

He said: “Yeah (wanting to sign a midfielder and striker), but that was the case before Chelsea, and the case after the Chelsea game.

“The game didn’t really tell us about the players we needed – we knew it before.

“The chairman and Dougie [Freedman], we are working to improve the squad.

“We knew that we need to bring players, until the market [closes], everything is still possible.