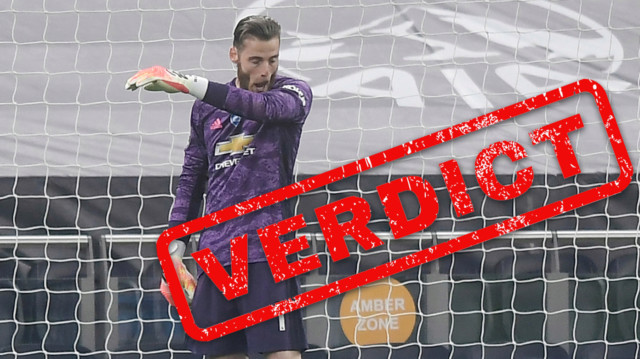 IT WAS AS WELL for David De Gea that Roy Keane was in the TV studio and not the dressing room.

Had he been De Gea might have been missing the rest of the season with a broken nose.

The former Manchester United captain tore into the goalkeeper him for his first half blunder that gave Tottenham a 27th minute lead.

Steven Bergwijn’s shot went straight at him and then into the net off the back of his right hand.

It was almost as if that hand got in the way of the other as the left was outstretched seemingly to do the job of saving the shot.

It was not just about this one incident that saw Keane blow his top.

De Gea has been making too many mistakes for too long now.

Keane said: “I am sick to death of this goalkeeper.

“I would be swinging punches at that guy.

“That is a standard save for an established international goalkeeper. I’m flabbergasted.

“I wouldn’t let him on the bus after the game. I’d tell him to get a taxi back to Manchester.

“He is the most overrated goalkeeper in a long, long time.”

Well he wasn’t to be fair. But you can no longer call him the best in the world. That label has long since fallen off.

The last time United dropped points it was De Gea’s fault as they drew 1-1 at Everton.

Keane was on hand to give his opinion on that occasion too.

“I would have lynched him at half time. I have no time for that carry on,” he said.

That mistake meant that no other Premier League goalkeeper had made more errors resulting in goals since the start of last season than De Gea’s seven, you can now make that eight.

At 29-years-old goalkeepers are often at their peak, De Gea is past his.

It is now a serious debate now as to whether United would be better of with Dean Henderson for next season.

He is currently on loan at Sheffield United and heads the golden glove standings for the most Premier League clean sheets with 11, alongside Burnley’s Nick.

The Blades have the second best defensive record in the league with Henderson the solid presence giving the back four confidence.

United no longer have that same confidence in De Gea.