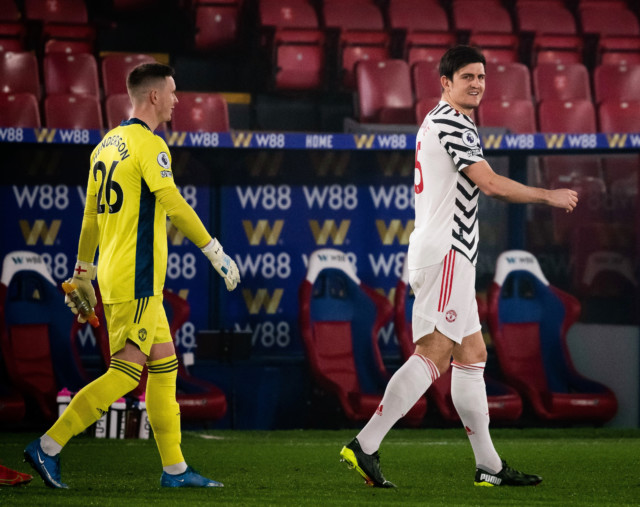 DEAN HENDERSON has been warned he has the toughest job in football.

Yet Manchester United skipper Harry Maguire has no doubts the keeper is ready to take a golden chance to establish himself as the club’s No 1.

Henderson, 23, who has played for United 14 times this season, will get a run of games after David De Gea returned to Spain for the birth of his daughter, and will be forced to quarantine when returning.

This means Henderson will face Manchester City today, AC Milan in the Europa League on Thursday and West Ham in the Prem next Sunday.

Maguire said: “Being a goalkeeper is an unforgiving place, especially when you play for Manchester United.

“It is probably the most scrutinised position in English football, maybe world football. And probably closely followed by the centre-backs!

“When you play for this club you have to like the pressure. He has the personality to do that, Deano.

“He will see this as an opportunity. Obviously I don’t want to put pressure on him but he’s a top keeper and he’s a lad who does not lack confidence!

“He knows it’s an opportunity and sometimes you have to take it.

“It is fantastic we have David with his experience and Deano is coming through. We have two very, very good keepers fighting for one place.”

Henderson returned in the summer from his loan at Sheffield United.

He has clean sheets in five of his last six matches but has only featured in four Prem games so today’s trip to City is a good test.

Maguire added: “It is not just the one game where he knows he will come in and then go back on the bench.

“It is the same as David picking up an injury, so he could have a run of games to build confidence. It must be tough, going in and out as a keeper.”

Henderson made his England debut in the 3-0 win over the Republic of Ireland in November and looks certain to be in the squad for the World Cup qualifiers later this month.

Maguire added: “He has all the attributes to play for England. You need that confidence, especially when you play for England as you get criticised for every goal you concede.

“It is something he will have to deal with.”

Did you miss our previous article…
https://www.sportingexcitement.com/2021/03/06/ezequiel-garays-stunning-wife-reveals-sex-woes-and-lacks-appetite-for-intimacy-with-says-ex-real-madrid-star/