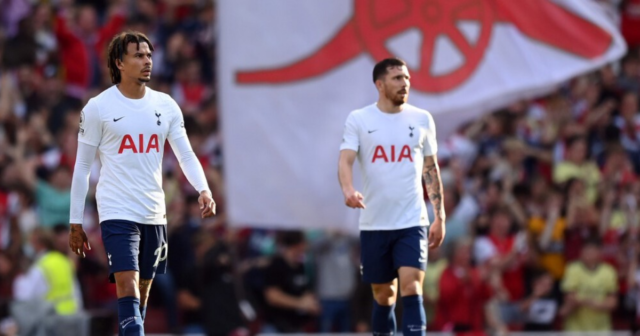 DELE ALLI had sleepless nights after being hauled off at half-time during Tottenham’s embarrassing North London Derby defeat to Arsenal.

But the Spurs midfielder has begged for patience from the fans after a shaky start to the season, and has assured boss Nuno Espirito Santo: The players believe in you.

Alli, 25, was in the firing line after being brought off after 45 minutes at the Emirates with his side 3-0 down.

Nuno referenced in his post-match interview that certain players were not carrying out his instructions after a third Prem defeat in a row.

But Alli was back in team on Thursday as captain – scoring an early penalty in their 5-1 Europa Conference League win over NS Mura.

And the England midfielder is confident that, given time, Nuno will come good at the club as he looks to stamp his authority on this side.

“For me personally being subbed at half time as well, a couple of sleepless nights, but we know what we have to do.

“We went through a period where it was important that we all stayed together, the fans and the players, with the coach.

“We are building and working, the transition from last season.

“If anyone thought it was going to be magical and someone clicks their fingers and it all slots into place straight away, that’s not the way it works.

“It’s a process and we believe in it.

“We are seeing things we are happy with and not happy with. we are trying to improve. Some things take time. Hopefully not too much time, we know that.”

Ahead of the clash with Aston Villa on Sunday, Alli added: “We have to keep working. We want the fans to stick behind us.

“We are going to keep fighting. We are building something. It was a good win but we need to move on to the league.”