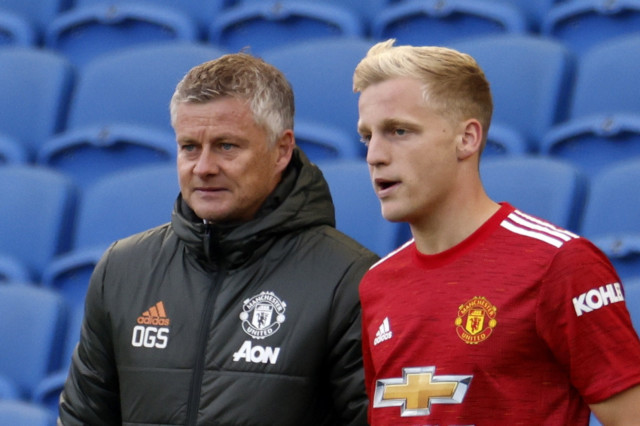 The Dutchman has made just eight starts, only two in the league, since his £40million move from Ajax.

His agent and Dutch icon Ronald De Boer have both voiced concerns over the midfielder’s situation.

United boss Solskjaer said: “I’ve spoken to him and made him aware of how much we rate him.

“There’s many examples of players needing a bit of time, quality players.

“You don’t expect people who care for him to be quiet at times.

“Donny will play against Watford, it’s another chance for him to kick on.”

How Manchester United could line up versus Watford

Having only made two Carabao Cup starts and a pair of brief appearances off the bench this season, the Nigerian appears to be surplus to requirements.

United are set to wave off Ighalo at the end of the month, when his loan move from Shanghai Shenhua ends.

“I don’t know how many goals be scored, but he was the top scorer by a mile in round robin we just had in training.

“So he’s not lost any of his sharpness or his quality. It’s been difficult for him to be out of the squad as many times of course, because he did really well up to the summer.

“This season he’s not had as many opportunities, but he’s never let himself down as a professional and a human being.

“In training he always works hard and he’s been a positive influence in the dressing room.

“He’s in the squad and hopefully I don’t need to put him on that we need goals, but hopefully he can join in.”