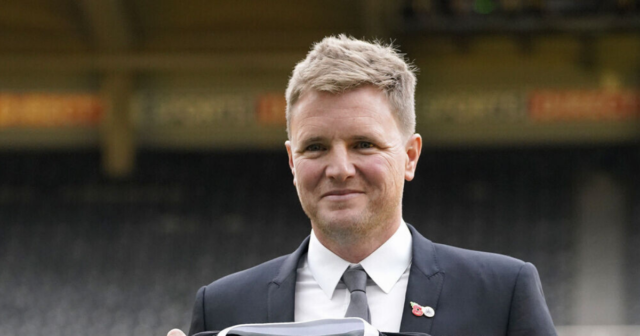 EDDIE HOWE claims he got “more right than wrong” with his Bournemouth buys — as Newcastle’s boss plots January targets from his hotel room.

The Toon boss is self-isolating this week after last Friday’s positive Covid test and is set to miss Saturday’s clash at Arsenal.

So with time on his hands, and rock-bottom Newcastle’s situation growing ever more desperate, Howe has to be bang on when the transfer window opens.

He claims there were more hits than misses with the Cherries, although duds like £15million flop Jordon Ibe left a bitter taste.

The Saudi-led regime will hand him £50m to fire the Magpies out of danger.

A modest budget for the richest club in the world staring relegation in the face, but purse strings could be loosened down the line.

Howe, 43, said: “We made some very, very good signings and we made some signings that weren’t so good.

“As long as you get more right than wrong, which I felt we did at Bournemouth.

“If you go look at the signings as a whole and you go through each one individually, I would definitely say that.

“Unfortunately the negative ones get highlighted more than positive ones.”

Having cash to splash is nothing new to Howe, who spent around £250m in five Premier League seasons on the South Coast.

As well as Ibe, the close to £70m splurged on Jefferson Lerma, Brad Smith, Dominic Solanke, Max Gradel and Benik Afobe left a lot to be desired.

Relegation put a negative spin on Howe’s track record, but dig a little deeper and there were plenty of gems unearthed.

Three — Matt Ritchie, Ryan Fraser and Callum Wilson — are with him at St James’ Park.

The trio cost Bournemouth £3.8m before moving to Newcastle for a combined £32m.

Nathan Ake went to Manchester City for £40m, double what they paid Chelsea, while Arnaut Danjuma was sold to Villarreal for £20m, making a healthy profit.

And he spent £1m on Aaron Ramsdale in 2017, selling the England keeper back to Sheffield United three years later for 18 times that.

At Burnley, Kieran Trippier and Danny Ings were both sold for profit — as well as stalwart Ben Mee bought.

Howe had full control over Bournemouth buys, but will eventually have to get used to working alongside a director of football on Tyneside.

He brought former team-mate Richard Hughes into his recruitment team at the Vitality Stadium, who eventually became technical director.

‘Demands on my time are huge’

But if Amanda Staveley and the Saudis get their first choice ex-Chelsea chief Michael Emenalo, it will be new territory for Howe.

Emenalo wielded a lot of power at Chelsea, so if he gets the gig it is vital their stars align.

Howe, who managed their 3-3 draw against Brentford from his hotel suite, added: “At Bournemouth, I never signed a player I didn’t want, but I would always say it was a collaborative effort.

“Whatever structure it is, it’s essential you have people in position that can help you manage. The demands on my time are huge.

“You can’t be everywhere, you can’t be watching targets somewhere else, so that’s where the people bringing the players to you need to do very good work.”