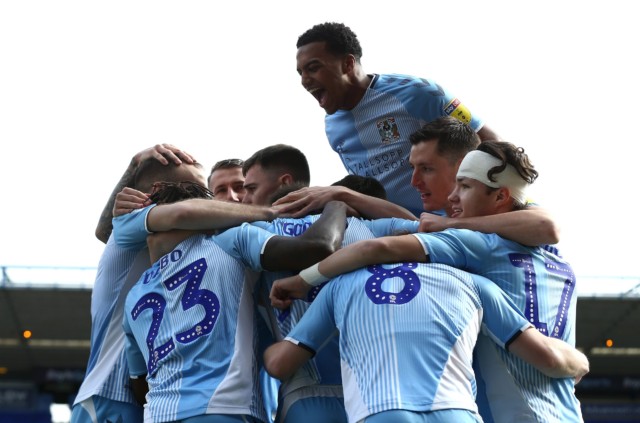 TEAMS in Leagues One and Two WILL be promoted and relegated, even if clubs vote to end the season later today.

New regulations have been passed that will see the final league standings decided by a points-per-game format.

Coventry WILL be promoted to the Championship

This will see Coventry City and Rotherham United promoted to the Championship, while Crewe Alexandra, Swindon Town and Plymouth Argyle will rise into League One.

The play-offs are set to still go ahead in both divisions, even if the rest of the campaigns are cancelled.

In order for the remainder of the regular seasons to be axed, 13 clubs in each respective division will have to vote in favour of curtailing proceedings.

League Two are expected to swiftly close their season, with Exeter City, Cheltenham, Colchester United and Northampton Town to enter the play-offs.

But matters could be more complex in League One.

Sunderland, Portsmouth and Ipswich Town, who all harbour promotion ambitions, want to follow the Premier League and Championship in continuing its season.

But with costs of mass testing and even paying players an issue for the smaller clubs in the division, a resumption is unlikely to gain enough votes.

Tranmere Rovers, who would be relegated under the current circumstances, had proposed a new formula to decide the season… that would have involved saving themselves.

But the EFL have confirmed that their plans have been “overwhelmingly” passed by the majority of their 71 member clubs.

Chair Rick Parry said in a statement: “The board has endeavoured to listen to all views and alternative approaches but understands that the decisions taken will not be met with universal satisfaction from all clubs.

“Today’s outcome ensures that the league and its clubs remains as faithful as possible to the previously agreed regulations and that there is consistency in the approach adopted across the EFL in all divisions if required.”

If, as is expected, League One vote to end their season this afternoon, Bolton Wanderers and Southend United will join Tranmere in the fourth tier next season.

Only Stevenage will be relegated from League Two, however, with the EFL already a team short because of Bury’s expulsion at the start of the season.

Wycombe Wanderers, Oxford United, Portsmouth and Fleetwood Town will compete in the League One play-offs.