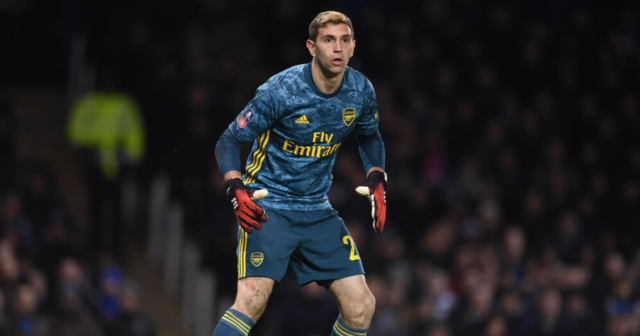 EMI MARTINEZ has revealed he never wanted to join Arsenal when he arrived at the club in 2010.

The 29-year-old, who is now the No1 keeper at Aston Villa, joined the Gunners 11 years ago from his boyhood side Independiente.

But having made just 38 first team appearances for the North London outfit – including their FA Cup final win over Chelsea – Martinez departed last summer in search of more game time.

Arsenal opted to stick with Bernd Leno, but may be ruing their decision as Martinez kept four more clean sheets than the German in the Premier League last season – with only Man City’s Ederson and Chelsea’s Edouard Mendy managing more.

And the Argentine has now admitted he never even wanted to move to the Emirates in the first place.

Speaking in an interview with El Pais via The Mirror, he said: “Arsenal came to look for me and Pepe Santoro told me that the train only passes once in a lifetime.

“My family and my agents thought the same. So, the decision was more for them [his family] than anything else.

“I didn’t want to go. I did not regret it, but I wanted to play in Independiente.

“For a while I thought: ‘If I stayed, in two years I will make my debut’. I knew I could get to Independiente’s first team. The club trusted the youth team goalkeepers.

“We lacked a little financially. I did it more for that than for sports.”

Martinez played in all 38 Premier League games for Aston Villa last season and was one of their standout performers.

Dean Smith’s side improved on their previous top flight campaign as they finished in 11th place.

They have started the new season with mixed fortunes, picking up four points against Newcastle and Brentford following their opening day defeat to Watford.

Meanwhile, Arsenal have suffered the worst start in their history, shipping nine goals and failing to score in three dreadful defeats.

As a result, they sit bottom of the table heading into a home game against 19th place Norwich City on Saturday.