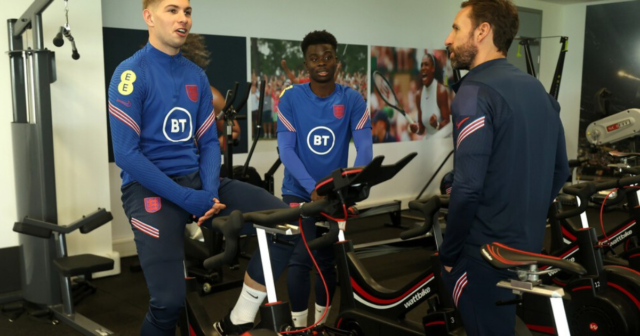 THE joys and the sorrow of representing England became clear to Emile Smith Rowe after he watched close friend Bukayo Saka at the Euros.

Smith Rowe and Saka emerged through the Arsenal youth system together.

And England new boy Smith Rowe watched his pal shine in the semi-final victory over Denmark — only to suffer vile online abuse after missing the last penalty in the shootout defeat by Italy.

Smith Rowe said: “I came to the semi-final at Wembley and I watched Bukayo, and he got the assist for the goal against Denmark. That was a special feeling — not just for me but everyone at Arsenal.

“To see him doing so well after growing up together and playing together… it was just crazy. I couldn’t be more proud of him.”

But after Saka was racially abused — along with Marcus Rashford and Jadon Sancho — after that agonising shootout, Smith Rowe realised the flip side of playing for England.

He added: “I tried to give him some space at first. He had his holidays and stuff. After a couple of weeks, I sent him a message.

“It was obviously hard to see one of my closest friends suffering. It was tough to watch, definitely.

“But when he came back, everyone got around him. Bukayo is a strong person and he has definitely bounced back already.”

Saka and Smith Rowe now have their own chant at the Emirates, sung to the tune of Status Quo’s ‘Rockin’ All Over The World’.

And Smith Rowe said: “Me and Bukayo are always laughing about it and sometimes it gets played in the changing room. Some of the lads are making a joke about it.

“It’s funny but I didn’t think the fans would’ve made a song about us.

“Coming through the academy, it makes it extra special that they’ve got a song about us.”

Did you miss our previous article…
https://www.sportingexcitement.com/football/premier-league/paul-pogba-could-never-play-for-man-utd-again-with-red-devils-ready-to-shelve-89m-flop-even-after-injury-return