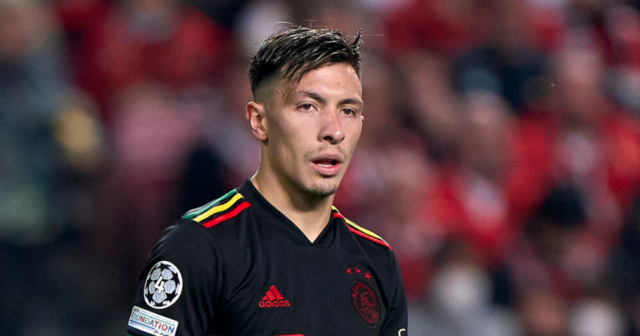 The Argentine centre-back has agreed a £46million move from Ajax this summer.

And the transfer will see Martinez reunited with his former boss Ten Hag.

The versatile defender can play in a number of positions and roles, leading to speculation over where he will fit at Old Trafford.

But Ten Hag appeared to make it clear where he intends to field Martinez during Tuesday’s friendly in Australia.

That’s because captain Harry Maguire – repeatedly BOOED by fans – was shifted from his usual left-sided central defensive position to the right against Palace.

It means left-footed Martinez, who always played on the left at Ajax, could slot straight into United’s team in Maguire’s former position.

And that would leave the England ace battling Raphael Varane for the vacant place on the right.

Ten Hag’s apparent decision to field Martinez as a centre-back rather than a holding midfielder means he is still on the hunt for a new No.6.

But United are yet to strike personal terms with the Dutchman as he wants to remain at Barca.

The Red Devils are also in the market for a new forward as questions remain over Cristiano Ronaldo’s future.

Brentford’s Ivan Toney and Sassuolo’s Gianluca Scamacca have been linked after Ajax’s Antony was deemed too expensive.

Yet Ten Hag has already strengthened his squad this summer, with left-back Tyrell Malacia and playmaker Christian Eriksen joining Martinez through the door.