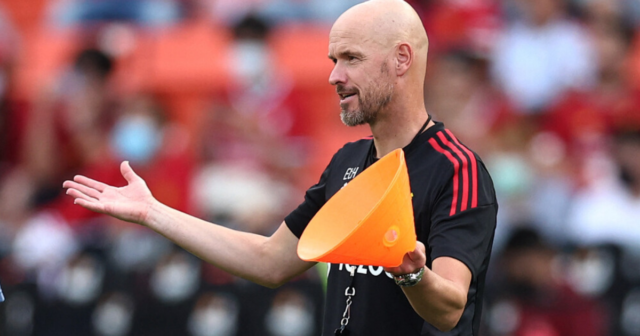 ERIK TEN HAG has hinted at what his first Manchester United starting XI will be.

The Dutchman will be in the dugout for the first time as Red Devils boss when they take on Liverpool in Bangkok this afternoon.

United are without wantaway forward Cristiano Ronaldo in Thailand, but Ten Hag will still be able to field a star-studded XI against the Reds.

According to The Athletic, the 52-year-old lined up his side in a training drill that could be how they take to the field later today.

The exercise comprised of seven attackers vs eight defenders in one half of the pitch.

Ten Hag’s attackers featured Fred at the base of the midfield, with Donny van de Beek roaming alongside him.

Marcus Rashford was on the left flank, with Jadon Sancho on the right.

Bruno Fernandes took up his usual No10 position, with forgotten man Anthony Martial up front after returning from Sevilla.

For the defending team, Eric Bailly and Victor Lindelof were deployed at centre-back, while Aaron Wan-Bissaka was at right-back.

Ten Hag took a hands on role in the session, barking instructions at the attacking team.

He said to Rashford and Sancho: “When you cannot cross it, pull back, pass back into (midfield), we go to the other side.”

The attacking team shot into a full sized goal guarded by Nathan Bishop, while the defending team had a small, unguarded goal to shoot into on the halfway line.

Bishop deputised for David de Gea, who was doing other work elsewhere.

Youngster Zidane Iqbal impressed during the training session at Rajamangala Stadium in Bangkok, and scored after dribbling past Fred.

The attackers’ blushes were spared with Rashford and Fernandes both scoring from Sancho assists.

Harry Maguire only took part in light training after sustaining a small injury, while Scott McTominay, Raphael Varane, James Garner and Axel Tuanzebe were not involved as they are all on individual training programmes.