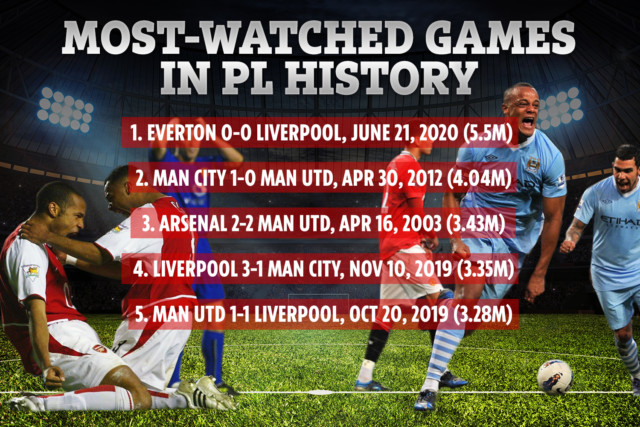 EVERTON’S 0-0 draw against Liverpool became the most-watched Premier League match of all time with 5.5million viewers tuning into the Merseyside derby.

The game was broadcast on Sky Sports as well as Pick TV, a free-to-air station.

Had City failed to beat Arsenal on their first game back since the league’s return, Liverpool would have needed just three points at Goodison Park to secure their first title in 30 years.

But the champions thumped the Gunners 3-0 only for runaway leaders Liverpool to come away with one point in the derby.

Despite a record number of viewers, fans online were less than thrilled with the dull derby.

One said: “Everton vs Liverpool must be the most boring derby ever.”

Another said: “Jealous of anyone that decided not to watch Everton – Liverpool. Whatever you did in those 90 minutes, it has been more useful than watching this game. Bloody hell that was boring.”

Jealous of anyone that decided not to watch Everton – Liverpool. Whatever you did in those 90 minutes, it has been more useful than watching this game. Bloody hell that was boring.

Everton vs Liverpool must be the most boring derby ever

This Liverpool’s match is boring af

The champagne remains on ice for Liverpool at the moment, but if City lose against Burnlet in their next game and the Reds then beat Crystal Palace they will be crowned champions.

Should Pep Guardiola’s men win, Liverpool would need them to drop points against Chelsea on Thursday June 25.

The soon-to be champions then play City at the Etihad July 2.