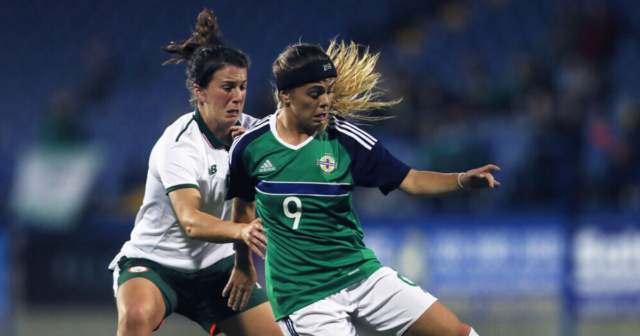 SIMONE MAGILL has been included in Northern Ireland’s 23-player squad ahead of their World Cup qualifiers against England and Austria.

The Everton forward was out of action for the team’s 4-0 September wins against Luxembourg and Latvia due to injury.

Kenny Shiels’ side will take on Sarina Wiegman’s Lionesses at Wembley on October 23 in what will be England’s first match at the venue since a 2-1 loss to Germany in November 2019.

Before the Wembley game Shiels, 65, said: “Our last match (against England) was at St George’s which was a much less intimidating stadium, but it was an experience

“We were short-staffed at that time, but it was a really good experience for everybody, and we are looking forward to this one.

“I feel there will be a good verve about the place.

“They (the team) will be wanting to try to keep their record in terms of what we have achieved in our last eight games. It’s been really phenomenal.”

Northern Ireland’s duel with England will be followed by their home game against Euros 2017 semi-finalists Austria.

Irene Fuhrmann’s side are currently second in Group D behind the Lionesses.

Shiels added: “Austria were beaten on penalties in the semi-finals of the last Euros. Their academy system is the best in Europe in the girls’ game.

And Magill’s comeback could prove a welcome boost for Shiels’ side ahead of their upcoming games this month.

The Toffees forward, 26, was on target with the winner in the first leg of a play-off victory that saw Northern beat Ukraine to qualify for the 2022 Euros.

And the WSL ace netted six goals in 16 top-flight appearances for Everton helping them to finish fifth last term.