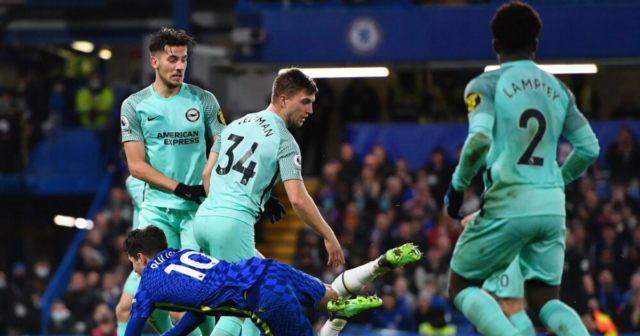 THOMAS TUCHEL has slammed referee Mike Dean after Chelsea were denied a penalty in their 1-1 draw with Brighton on Wednesday.

The Blues‘ boss was adamant that his team deserved a penalty in the 50th minute after Christian Pulisic was tripped by Joel Veltman in the box.

However, Mike Dean did not have the same view and the challenge was not looked at by VAR.

Tuchel was left frustrated by the outcome after the final whistle and did not hold back in his comments on the referee.

He said: “We have a 100 per cent penalty against Christian Pulisic.

The 48-year-old also criticised a decision which saw a goal from Mason Mount disallowed due to a foul.

“A 50-50 challenge from Mason Mount right before their equaliser, why does he even need to whistle before the ball is over the line? We have VAR to check.

“Is he so sure or does he want to keep the tension up? And the penalty, it’s a joke, honestly it’s a joke not to intervene from VAR.

“And we have a horrible decision from the referee. It is a clear penalty for two zero, not even checked, so everything against us.”

Tuchel also expressed his frustrations about the covid and injury issues that his team is facing.

He added: “Everyone in the dressing room is completely exhausted, it’s the same subject every single matchday now.

“We have no more wing backs, we have everybody injured and players coming back from the covid situation and we’re playing playing playing and I will always protect my players.”

Chelsea now face fellow title challengers Liverpool in their next fixture as both sides aim to close the gap on league leaders Manchester City.