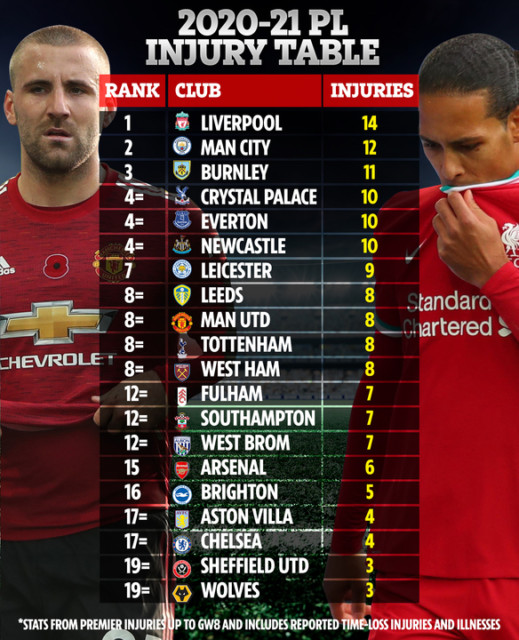 GARY LEWIN fears the rise in football injuries could continue for the next three years as Joe Gomez became the latest high-profile casualty of the hectic season.

Now the former Arsenal and England physio wants to see the sport’s stakeholders uniting to form a long-term vision to protect players.

Although there is no official audit of Premier League players’ medical records, figures show a 16 per cent increase to 154 injuries and illnesses at this stage of the season compared to the last four campaigns.

Premier Injuries’ stats, covering up to matchweek eight of 2020-21, take into consideration reported injuries and illnesses resulting in a player missing a top-flight fixture but not fatigue-related absences such as cramp.

These numbers are only expected to worsen due to soft-tissue problems picked up this week by Gomez and Nathan Ake on international duty.

And with no mid-season break, a major international tournament in 2021 and 2022 and the Qatar World Cup set to shift the 2022-23 season dates, Lewin is worried.

He told SunSport: “There is no proper break. The next three years is going to be very interesting.

“Questions need to be asked. As an industry, do we have a duty of care to our employees, the players?

“Instead of fighting for their own piece of the pie, everyone needs to work out what’s best for the game. 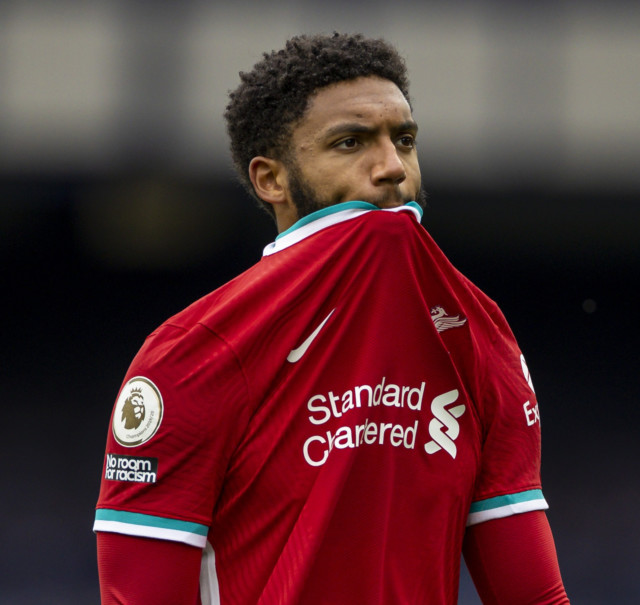 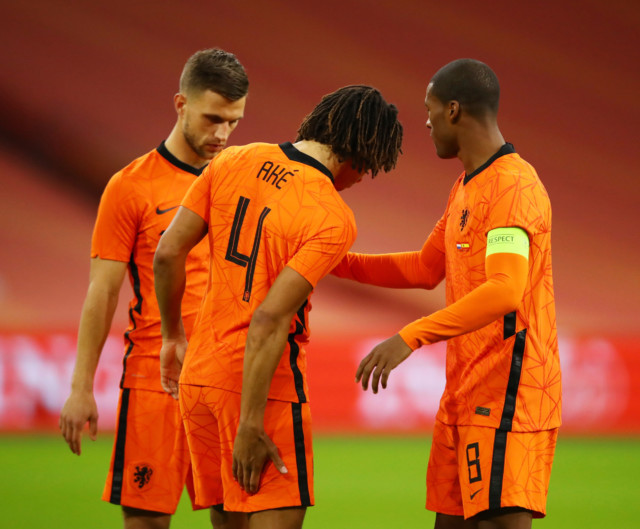 Lewin, 56, added: “The process starts with everyone coming together rather than individual decisions being made for individual competitions.

“My suggestion is to get stakeholders together – the Premier League, EFL, the PFA, international representatives, TV companies and commercial stakeholders.

“The first step forward would be an international calendar, the second step would be amalgamating the cup competitions into the Premier League. Some input from the PFA is needed for the players’ welfare.”

Even before Gomez and Ake’s, Liverpool and Manchester City had already suffered the most injuries or illnesses in the Premier League this season with 14 and 12 respectively, leaving Jurgen Klopp and Pep Guardiola fuming.

Gomez and Virgil van Dijk’s are long term while the likes of Alexander-Arnold, Thiago, Fabinho and Alisson have all missed, or will miss, multiple matches for the champions.

Wolves and Sheffield United, however, each have just three reported problems, 4.7 below the league average.

Worryingly, the vast majority are soft-tissue problems with around 44 per cent of the cases muscular tears, pulls or strains as the fixture pile-up means players are often going on to the field already fatigued, overplayed and at risk of injury.

But methods are made even harder by Covid-19 restrictions limiting essential treatment to 15-minute blocks and limits on people in swimming pools and ice baths.

Lewin said: “You’ll see a lot of squad rotation because the medical staff will highlight some players are on the edge. If they play another, it may be one game too many.

“The problem is if you pick up two or three injuries in the same position, rotation becomes very difficult.

“You end up overplaying the players that are fit in those positions and pick up more injuries. It’s a jigsaw puzzle continually being changed.”

Lewin had 22 years at Arsenal, overlapping with his 20 with England, and saw physiotherapy transform in football.

From one physio, an x-ray and free weights on the grass outside to teams averaging 17 staff with MRIs, CTs and ultrasound scans available, kitted-out gyms and cryotherapy chambers.

As well as treating professional footballers, they also see customers from rugby players and athletes to rock climbers and ballet dancers to bobsledders and the ‘weekend warriors’. 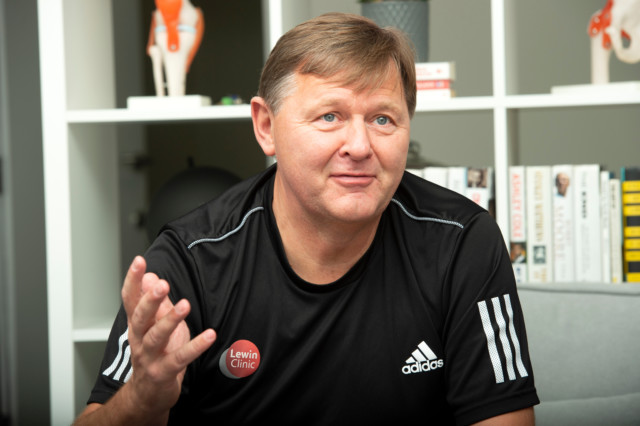 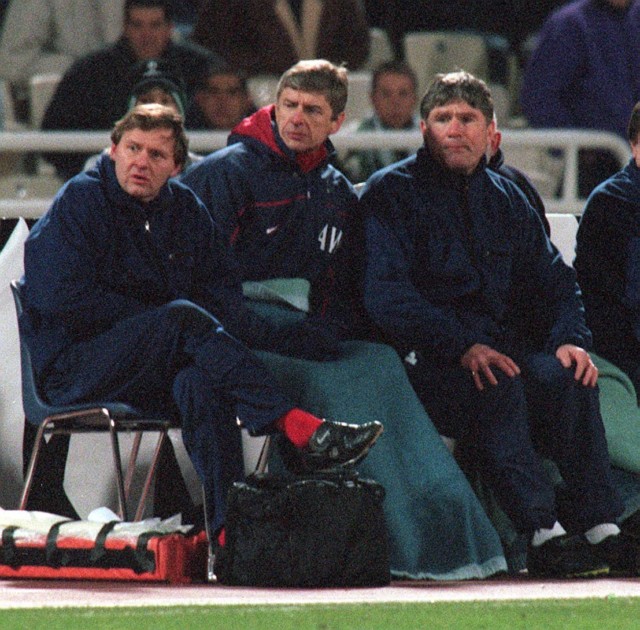 Lewin, left, spent many years alongside Arsene Wenger and received plenty of support from the Frenchman when launching his clinic

But they have some famous faces from their time with the Gunners to thank for their successful launch.

Lewin added: “Arsene Wenger, David Dein and Dick Law, who used to do the contracts at Arsenal, gave us some incredible advice on business planning, modelling and all the things Colin and I had absolutely no clue whatsoever about.

“I don’t think we would have got started without it. Arsene was very supportive, David Dein is very good on the business and contacts side of it, Dick Law did our business plan for us and it was absolutely amazing.

“I’m not saying we definitely wouldn’t have done it without them but I guarantee we could have fallen flat on our face without them.

“Then we were really lucky because they asked around for us and we managed to get some investors – we got Petr Cech, Aaron Ramsey and Mesut Ozil as investors.

“They haven’t actually been in yet but they get quarterly reports on the business. We often do calls with them and they are very supportive.” 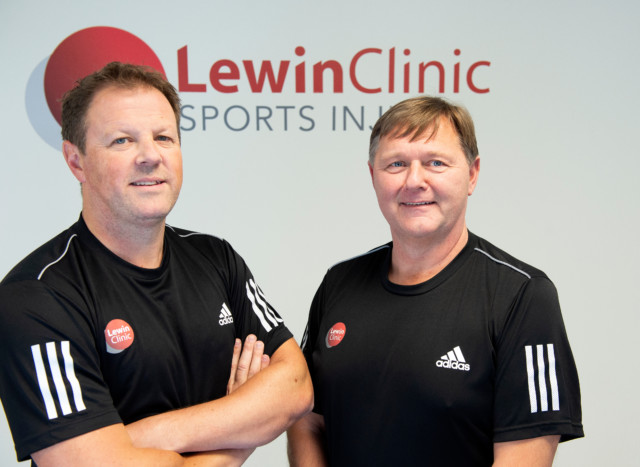 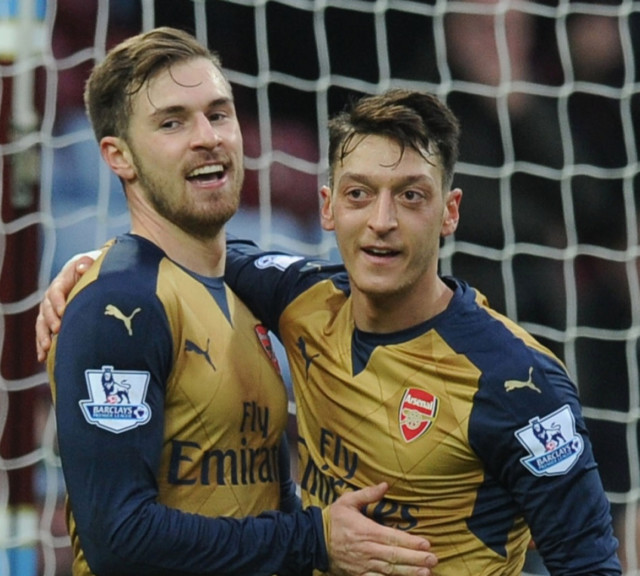 Aaron Ramsey and Mesut Ozil, as well as Petr Cech, are all investors in the Essex clinic
Advertisement. Scroll to continue reading.
In this article:arsenal, liverpool, manchester city, premier league, sheffield united