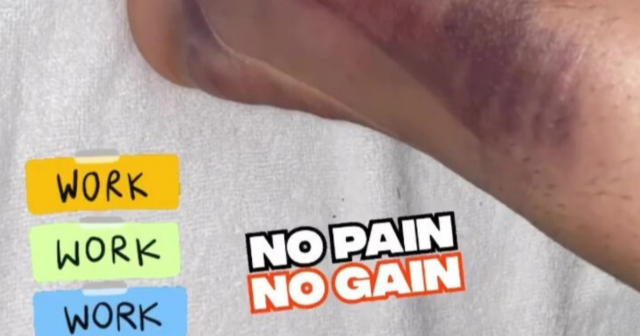 SPAIN midfielder Dani Ceballos has revealed the extent of a painful ankle injury that has threatened to end his Olympics.

Dani Ceballos shared a photograph of his heavily bruised ankle

Opposition forward Taher Mohamed caught Ceballos while on the turn, planting one foot on the ankle of his rival to leave a hefty mark.

The Spanish star’s ankle became swollen immediately, forming a huge lump that meant he was unable to play on.

Mohamed escaped a red card after a VAR check, much to the chagrin of Dani Olmo who said there was ‘no doubt’ it deserved more than a booking.

And Ceballos, 24, posted an update to his Instagram 24 hours after the game, showing little improvement on his injury.

The phrase ‘no pain no gain’ also featured after he shared an upbeat post about his chances of featuring again in the tournament.

“But still hoping and excited about doing everything I can to come back and keep helping my colleagues in this Olympic Games.”

However, Spain are not said to be optimistic about Ceballos’ hopes of appearing again in Tokyo.

According to Marca, the swelling has taken longer than hoped to go down, meaning an official diagnosis and recovery timeframe cannot be deduced.

The Real Madrid player is certain to miss Sunday’s second group match against Australia, and is a major doubt the game against Argentina.

La Roja are out to win a first Olympic men’s football gold medal since the 1992 Games in Barcelona, but drew 0-0 with Egypt to open the tournament.