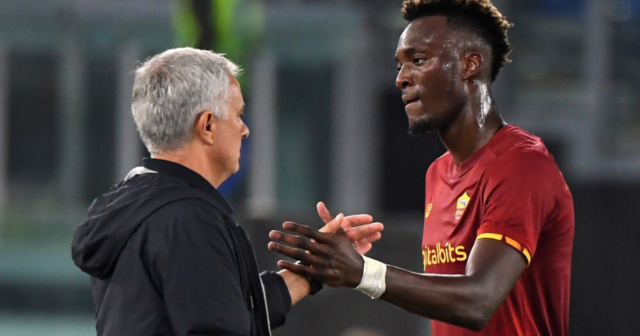 TAMMY ABRAHAM passionately sang along with Roma’s anthem… before scoring their winner against Udinese.

The former Chelsea striker, 23, linked up with Jose Mourinho’s new side over the summer.

Tammy Abraham, that is tidy

A beautiful improvised finish after some great work by Calafiori…

What a start he's made in Serie A! pic.twitter.com/5ScSZQLM44

And Abraham has made an immediate impact in the Italian capital.

The Roma fans are already delighted with the ace’s contribution so far.

And Abraham took his goal tally to three in six games as he netted in Thursday’s 1-0 home win against Udinese.

Before kick-off, the England international endeared himself further to Roma supporters by singing along with the pre-match anthem.

And costing £34million to sign from Stamford Bridge, Abraham is starting to look like a real bargain.

But the ace, who also has two assists for his new side, could end up returning to Chelsea in 2023.

The Blues have a buyback clause allowing to re-sign Abraham for £68m once he’s spent two years in Italy.

The AC Milan defender beamed: “I’m happy for Tammy, we talk pretty much every day.