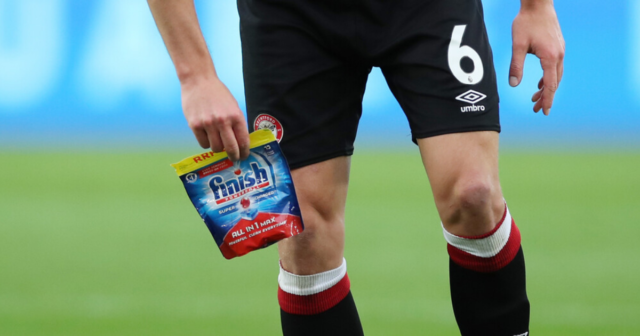 BRENTFORD fans must be worrying where their next clean sheet is going to come from judging by what one fan threw onto the pitch.

As the action unfolded at the Brentford Community Stadium in the Bees’ Premier League game against Norwich, one supporter decided to throw a packet of DISHWASHER tablets onto the hallowed turf.

They landed in front of Danish international Christian Nørgaard, who quickly carried them off.

Ironically, the name of the tablets – Finish – was what was missing from Brentford’s game in today’s clash.

First half goals from Mathias Normann and Teemu Pukki were enough to see off the Bees.

However, despite piling on the pressure in the second half, Brentford were unable to find an equaliser.

Brentford have failed to keep clean sheet since late August and a 0-0 draw against Crystal Palace.

Since then, they’ve let in 14 goals nine games and have dropped to 14th in the table.

An injury to £14million record signing Kristoffer Ajer hasn’t helped their cause at the back, as well an inspirational keeper David Raya.

And he’s expected to miss several games with the hamstring complaint suffered in the EFL Cup win over Stoke City.

They next face off against Newcastle United at St James’s Park on November 20.

Did you miss our previous article…
https://www.sportingexcitement.com/football/premier-league/jesse-lingards-brother-slams-man-utd-legends-keane-and-neville-over-double-standards-after-sky-sports-rants