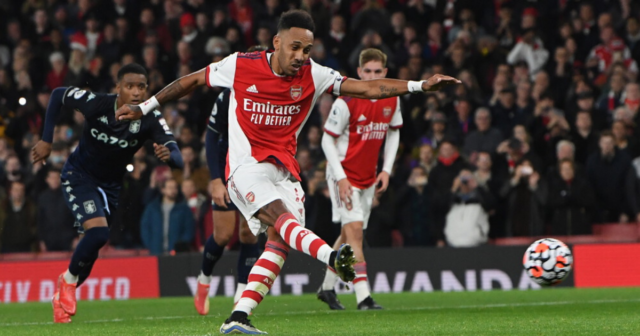 THERE was some confusion as to why Pierre-Emerick Aubameyang was allowed to convert the rebound after his penalty was saved against Aston Villa.

The play had been brought back by Craig Pawson after Alexandre Lacazette was brought down by Matt Targett with four seconds of stoppage time remaining.

Many fans felt Pawson had blown for half-time so the final touch before the break would be Aubameyang’s spot kick.

However, Pawson actually blew for VAR to have a look at the challenge, which took place with four seconds of the half remaining.

So when Emi Martinez saved Aubameyang’s penalty, the Arsenal striker still had four seconds to put the ball into the back of the net.

That is because what happened after the penalty now ‘does not exist’ as play was brought back for the spot kick.

Arsenal dominated the first half in a 45-minute period that the visitors failed to get a hold of.

And then the penalty incident doubled Arsenal’s lead on the stroke of half-time, but it really should have been more.

In the early stages of the game Partey had his first chance of the match when he volleyed a Bukayo Saka cross off the bar.

And then Saka should have had a goal himself when Nuno Tavares found him unmarked inside the box, only for the England international to be denied by the legs of Martinez.

Emile Smith Rowe made it three in the second half, before Jacob Ramsey pulled a consolation back for Dean Smith’s men.

Arsenal have still not lost a game since they were beaten 5-0 by Manchester City at the end of August.

They have also moved into the top half of the table following their victory over Villa, leaping up to ninth ahead of this weekend’s action.

Did you miss our previous article…
https://www.sportingexcitement.com/football/premier-league/barcelona-and-liverpool-academy-graduate-canos-now-starring-at-brentford-and-relishing-battle-with-old-roommate-maddison