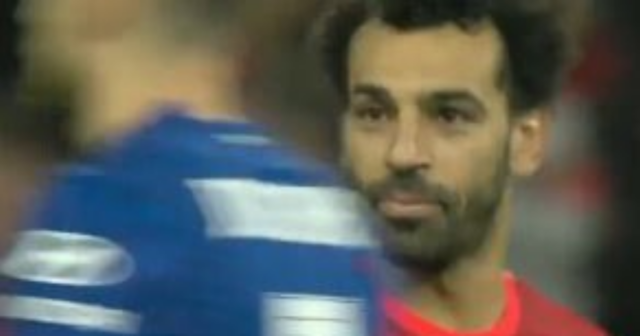 MOHAMED SALAH put his Afcon penalty shootout misery behind him as Liverpool beat Chelsea to win the Carabao Cup on Sunday evening.

The Reds eventually outlasted their rivals to keep their quadruple dreams alive, winning the shootout 11-10 after the match finished 0-0 after 120 minutes – including FOUR disallowed goals.

Caoimhin Kelleher was the unlikely hero as he scored Liverpool‘s 11th penalty and watched on as rival Kepa Arrizabalaga – brought on in the dying moments of extra time for the shootout – skied his effort.

But midway through the shootout, fans couldn’t help but laugh at ice-cold Salah.

The Egyptian took the usually decisive fifth penalty for his side, with specialist Jorginho doing the honours for Chelsea.

After casually converting his spot-kick, ex-Blues winger Salah strolled past Jorginho with a grin on his face and appeared to mutter something.

And fans are convinced the Reds ace attempted to psych him out by saying: “Don’t jump!”

Jorginho is famous for his hop before taking penalties in a bid to send the goalkeeper on his way early before simply slotting the ball into the opposite corner.

The Italian’s trick failed at the Euro 2020 final, as Jordan Pickford pushed his effort onto the post at Wembley.

Again at Wembley – and despite Salah’s cheeky advice – Jorginho still jumped before his penalty.

He even went the same way as against England in June – but this time was able to evade Kelleher.

After netting his effort, the shootout went on and on until it was down to the two goalkeepers.

Kelleher – trusted ahead of Alisson to keep his Carabao Cup spot – slotted his effort home.

But Kepa thumped his penalty miles over the bar to hand Liverpool the title.

Incredibly, Kelleher has now won more penalty shootouts than any other goalkeeper in Reds history, with three – including the dramatic quarter-final victory over Leicester.

Did you miss our previous article…
https://www.sportingexcitement.com/football/premier-league/who-is-football-fan-river-rhodes-and-why-has-he-had-radiotherapy/