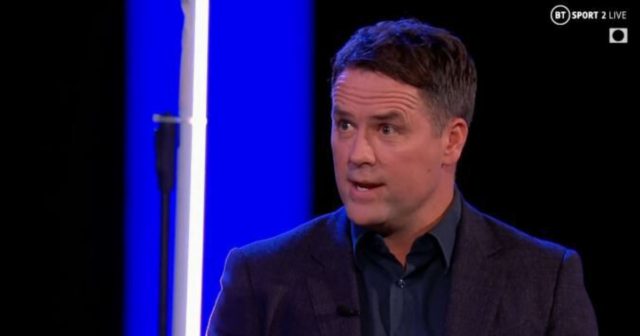 BT SPORT viewers were left begging for the ‘worst thing’ they’d ever heard to stop during the coverage of Real Madrid’s clash with Paris Saint-Germain.

And it was that man Michael Owen who was involved at the centre of it again.

The former Liverpool striker was joined as a studio guest by his ex-England and Anfield team-mate Steve McManaman.

But as the pair, who both also played for Madrid, were analysing the upcoming game the dropped a cringeworthy verbal bomb.

And it sent Twitter into meltdown as McManaman referred to Owen by a nickname of ‘Mo’ during the coverage before their colleagues continued it.

One viewer tweeted: “Mcmanaman calling Michael Owen “Mo” might be the worst thing I think I’ve ever heard.”

A fellow fan that was tuned in commented: “Sorry…since when has Michael Owen been known as ‘Mo’. Am I late to this. He probably gave the nickname to himself.”

As another infuriated viewer said: “Did the presenter on @btsportfootball just call Michael Owen “MO” … who’s started this, that needs to stop immediately!”

It’s not the first time that the 42-year-old 2001 Balon d’Or winner has caused a storm.

He was previously labelled ‘the most boring pundit in sport’ after a previous appearance on the box.

Did you miss our previous article…
https://www.sportingexcitement.com/football/premier-league/chelsea-boss-thomas-tuchel-warns-andreas-christensen-he-risks-making-huge-mistake-if-he-quits-for-barcelona/

Advertisement. Scroll to continue reading.
In this article:btsport, itwas, thatman