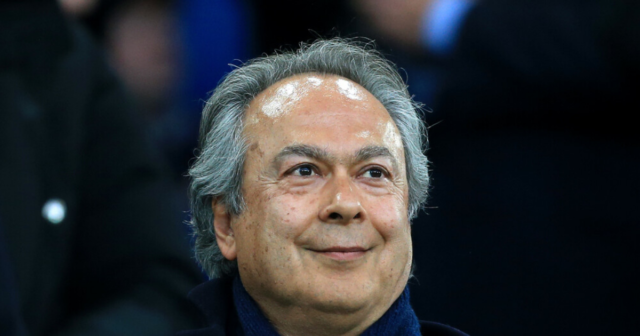 EVERTON owner Farhad Moshiri has increased his stake in the crisis-club and handed them a £100million capital injection.

The British-Iranian businessman, who used to have shares in Arsenal, has been with the Toffees since 2016.

Farhad Moshiri has increased his stake in Everton

During that period, he has sanctioned the transfers of Gylfi Sigurdsson, Richarlison and Yerry Mina.

But following the news Moshiri has increased his shareholding in Everton to 94.1 per cent, the club are set to be handed even more funds.

A statement read: “Everton Football Club’s Board of Directors can confirm Mr Moshiri has further affirmed his commitment to the Club with a £100m capital injection.

“The Club’s owner has acquired a further 33,333 shares in the Club, through Blue Heaven Holdings Limited, taking his shareholding in Everton to 94.1%.

“This acquisition represents the capitalisation of previous loans made by Mr Moshiri – greatly strengthening the Club’s balance sheet.

“The investment by the Majority Shareholder will ensure the Club continues to navigate the significant financial challenges presented by the COVID-19 pandemic whilst progressing plans for the First-Team squad and the ongoing development of a new stadium at Bramley-Moore Dock.”

Everton’s announcement comes as they search for a new manager, having sacked Rafa Benitez after a 2-1 loss at Norwich which left them 16th.

SunSport revealed Ballon d’Or-winning defender Fabio Cannavaro is the latest candidate to be considered by the Toffees hierarchy.

But the former centre-back is joined by Everton hero Wayne Rooney and ex-Chelsea boss Frank Lampard.

Though Jose Mourinho has ruled himself out of coming back to England, committing his future to Roma.

Derby boss Rooney, who made his name as a young player at Goodison Park, looks set to be interviewed by Moshiri and chairman Bill Kenwright.

Duncan Ferguson has been appointed as caretaker manager for a second time and will be in charge against Aston Villa tomorrow.

But the Belgian FA are refusing to consider an approach for Roberto Martinez, who was Goodison chief from 2013 to 2016.

The return of Rooney would be hugely popular for a disillusioned fanbase who were stunned when former Liverpool boss Benitez got the job in June.