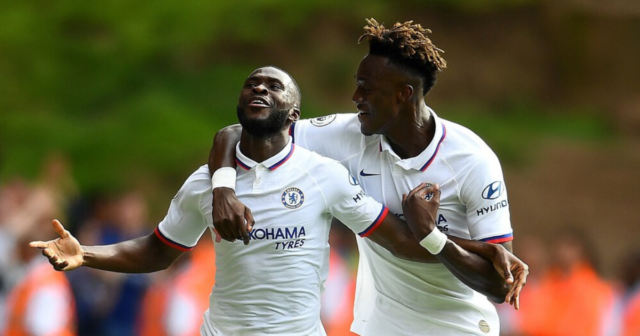 The duo came through the ranks together at Stamford Bridge but have both since made eye-catching moves to Serie A.

Fikayo Tomori and Tammy Abraham came through the ranks at Chelsea

Striker Abraham joined former Chelsea boss Jose Mourinho at Roma this summer, while Tomori moved to the San Siro in a permanent deal having impressed on loan.

Abraham notched his first home goal in Roma’s 5-1 Europa Conference League victory over CSKA Sofia on Thursday and Tomori has revealed his delight for his mate.

“I’m happy for Tammy, we talk pretty much every day,” Tomori told DAZN.

England midfielder Mount is a fellow Chelsea academy graduate and is the only one of the trio still at the Champions League winners.

But Tomori and Abraham both seem to be thriving on the continent, with the Roma faithful giving Abraham a standing ovation on his debut against Fiorentina.

The pair look likely to be reunited on the pitch again when AC Milan travel to Roma on October 31.

And while Abraham appears to be benefiting from the discipline of Mourinho in Rome, Tomori has revealed there is often “trouble” at AC Milan if players do not pull their weight.

That is due to the imposing presence of Zlatan Ibrahimovic, who refuses to let team-mates slack off even in jokey games of foot-golf.