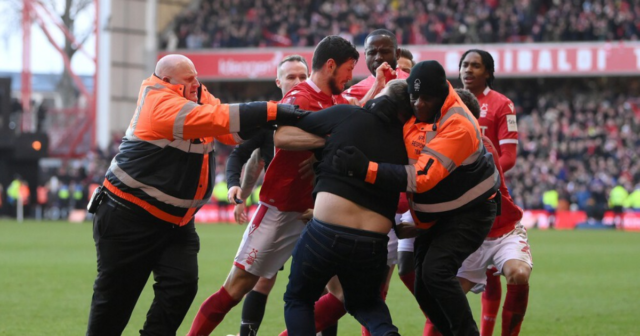 PREMIER LEAGUE chiefs will hold crunch talks this week on how to curb  the rise of shameful fan trouble.

The crisis will be one of the key discussion points at Thursday’s clubs’  meeting, where a briefing from league bosses and the police is expected.

It comes after Leicester issued a lifetime ban to a man who ran on to the pitch and allegedly punched Nottingham Forest striker Keinan Davis during the embarrassing 4-1 FA Cup defeat at the City Ground on Sunday.

Cameron Toner, 19, of Leicester, has been charged with three counts of common assault and going on to a playing area at a football match.

He is due to appear at Nottingham Magistrates’ Court on February 24.

There has been an alarming trend of fan misbehaviour of late — not only in the Premier League  but right across English football.

Incidents have included spectators entering the field of play, missiles being thrown, flares being set off and allegations of racial abuse directed at players.

Two Rotherham fans have been arrested and slapped with lifetime bans after Accrington’s Harry Pell was assaulted by a pitch invader on Saturday.

One Premier League chief told SunSport: “This is a huge issue.

“We predicted that a player would get hurt.

“We also predicted someone would get injured by a flare.

“Thankfully, that hasn’t happened yet — but it will do if this doesn’t stop.

“Fans are only going to get themselves banned by doing this.

“All this needs to stop — and we will be doing everything we can to ensure that happens.”

Prem supremos raised the issue at their last  get-together on January 26, when clubs agreed to hold talks with the FA, EFL and Football Policing Unit, which took place a few days later.