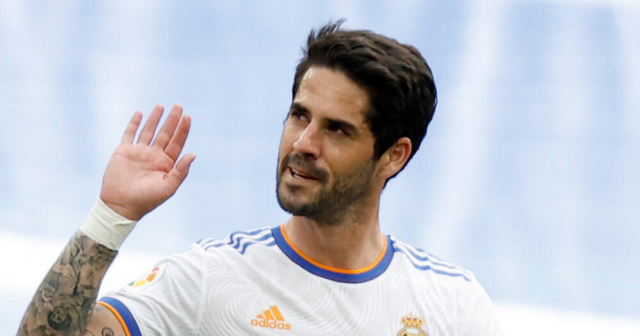 SEVILLA have confirmed they have reached an agreement to sign Isco on a free transfer.

The Spanish playmaker had been linked with a number of Premier League clubs earlier this year, including Arsenal and Tottenham.

Sevilla have confirmed they have reached an agreement to sign Isco

But he will now join Sevilla for free after leaving Real Madrid earlier this summer.

Isco will undergo a medical outfit with the LaLiga outfit on Monday, the club confirmed.

The 30-year-old will then officially put pen to paper on a two-year deal.

In total he played 353 games for Real, scoring 53 goals and providing 56 assists.

But he fell out of favour in recent seasons at the Bernabeu, and started just three LaLiga games in the last campaign.

Earlier this summer he bid an emotional farewell to Real Madrid ahead of his contract with the club expiring.

He summed up his spell in the Spanish capital by saying he had had a “f***ing fun time”.

Isco wrote: “I was in Malaga and I knew I had to go. I got engaged to another team. But Real Madrid knocked on my door and Real Madrid cannot and should not be told no, although there are always exceptions.

“I remember telling my people ‘f*** Madrid haven’t won the Champions League for many years and I have a feeling that it’s about to fall’ and LA DECIMA arrived, everything that comes after is already history.

“Nine years later, my time at the club that has made it possible for me to fulfill all the dreams I had when I was little comes to an end.

“Apart from fulfilling dreams, winning more titles than I had imagined, playing with the greatest, meeting incredible people: I HAVE HAD A F****** TIME AND THEY CAN’T TAKE MY DANCING OUT OF ME.”