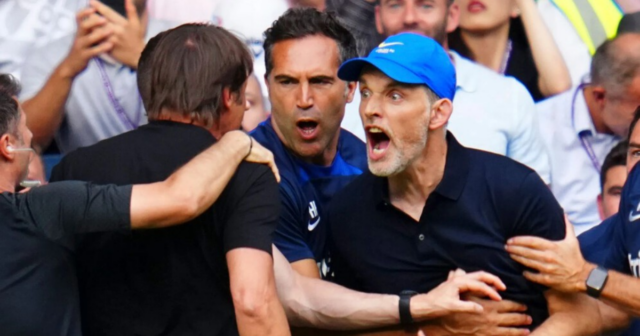 Tottenham pegged back the Blues in injury time to earn a vital point in the fiery Premier League match.

Tempers flared as Chelsea took on Spurs at Stamford Bridge

Despite the result, the German tactician was full of praise for his team.

However, he was extremely critical of match official Taylor, who he blamed for his side dropping points at home.

Tuchel believed there was a foul on Kai Havertz in the build-up to Spurs’ first goal, as well as an offside call on Richarlison who was seemingly impeding goalkeeper Eduardo Mendy’s sight as Pierre-Emile Højbjerg’s shot found the bottom corner.

After the game, Tuchel was livid when he spoke about the game’s key decisions to Sky Sports.

“Both goals should not stand,” he said.

“Only one team deserved to win, and that was us. I don’t know how many tactical fouls Hojbjerg and Bencantur did today.

“Since when can we pull hair in a football match? They checked and nothing happened, absolutely ridiculous.”

And in the press conference after the game, Tuchel remained annoyed by referee Taylor’s handling of the game.

When told he would be suspended for the Leeds game, he took aim the official.

“I cannot coach, but the referee can whistle the next game,” he said.

While it was also put to Tuchel that Chelsea fans have an issue with Taylor.

“Not only the fans,” Tuchel reacted.

Tempers flared at the final whistle of the ill-tempered affair, when Tuchel and Tottenham manager Antonio Conte shared an aggressive handshake.

While the Italian refused to be drawn into discussing the incident, Tuchel was happy to discuss his turn of events.

He said: “I thought when we shake hands you looked in each other eyes. He had a different opinion. It was not necessary but a lot of things were not necessary.

“We both got a red card. I think it was not necessary. Another poor referee decision.”