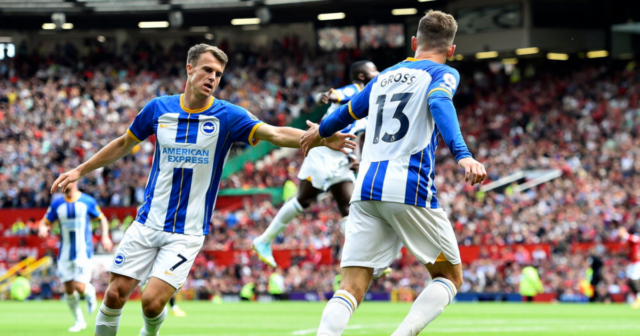 MANCHESTER UNITED were mercilessly trolled after going behind at Old Trafford to Brighton.

Brighton took a 2-0 lead before half-time

Pascal Gross latched onto a ball across the box from former Red Devil Danny Welbeck to open the scoring.

After madly celebrating the goal, the delighted visiting fans then turned their focus on ripping into Manchester United.

They started with a chant of “You’re going down the Palace”.

They then switched focus to new boss Ten Hag by singing “You’re getting sacked in the morning”.

The cheeky chants then sounded more like a potential reality than a harsh joke when Gross doubled Brighton’s lead before half-time.

The build-up to the match was dominated by talk of Cristiano Ronaldo.

But he may have been regretting the call after such a horrible start at the Theatre of Dreams.

Brighton fans were loving the match
Did you miss our previous article…
https://www.sportingexcitement.com/football/premier-league/west-ham-vs-man-city-tv-channel-live-stream-kick-off-time-and-team-news-for-premier-league-showdown/