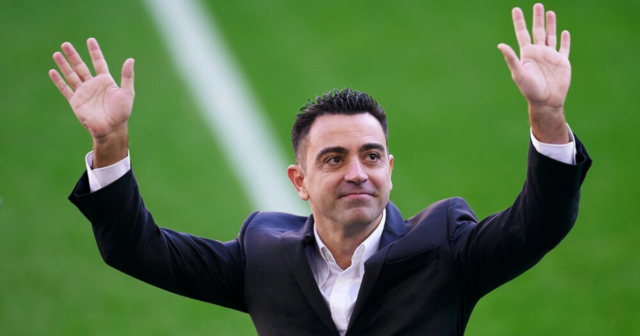 PEP GUARDIOLA insists his former midfield star Xavi does not ‘have to be my heir’ after he was appointed Barcelona’s new manager.

The Manchester City boss was in charge of the legendary star for four stunning years at the Nou Camp as they lifted every honour available to them.

They already had a close bond from when they played together for the Catalans at the turn of the century.

Guardiola stepped up from Barcelona B to take over the senior side in 2008 after just two years of experience coaching.

Now Xavi, who has left his Qatari club Al Sadd to return to Barca as Ronald Koeman’s replacement, has done the same after just 24 months in the dug-out.

But despite the parallels, Guardiola insists the 41-year-old should feel no added pressure to follow in his footsteps.

Speaking at a charity golf tournament, he said: “I wasn’t the heir to anybody and Xavi doesn’t have to be my heir.

“If [Barcelona president] Joan Laporta and the board have chosen Xavi then it’s because there are millions of pros and few cons.

“He knows the club and will bring positive energy, given how he enjoys football and because of his dedication. He always sees the positive side of things.

“With his class, dedication and effort, I’m sure he’ll improve the club’s situation.”

Xavi will be in charge for Barcelona’s next game against Espanyol.

The European giants have slumped to ninth in La Liga having won just four of their 12 games this season, while they threw away a three-goal lead against Celta Vigo on Saturday.