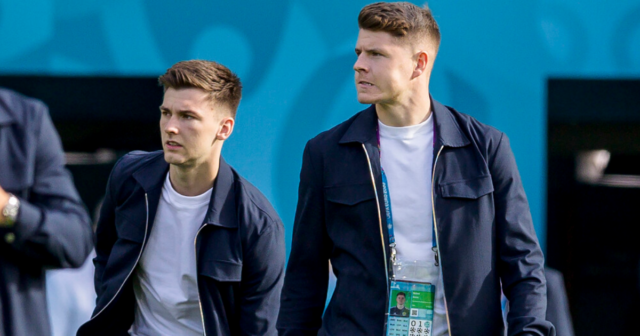 THEY have known each other since they were little Bhoys.

Now Kevin Nisbet has revealed how Arsenal star Kieran Tierney has been the man he’s turned to during his injury hell.

Kieran Tierney and Kevin Nisbet together on Scotland duty

The pair first met as kids when they were in the youth set-up at Celtic.

They were reunited when Hibs hitman Nisbet got a Scotland call-up.

When Nizzy was carried off against Celtic in February with a cruciate ligament injury, KT made sure he got in touch to offer his support.

Little did Tierney know that a few months later he too would end up crocked, with the striker returning the favour to his pal.

Nisbet said: “Myself and KT are really good mates. We were together at Celtic when we were about nine-years-old, and then we went our separate ways as happens in football.

“When I was called up for Scotland we reconnected, and we have been close since then which has been great.

“I was gutted when he suffered his injury and that ruled him out for Scotland in those important games.

“We texted each other every few days to see how each other is doing and talk about rehab programmes.

“It’s never nice to be injured, but to have a good mate, and someone you trust, going through it has been a big help.

“KT knows how I am feeling and vice-versa, so we can support each other through it.

“You can talk to your friends and family when you are out, but they maybe don’t understand how you are feeling.

“When I am down I can drop him a text, and he will know how I am feeling because he has been in the same boat.

“We are able to bounce ideas off of each other as well.

“Kieran and I can talk about what he is working on that might help me, and it’s exactly the same with me for him.

“We were gutted that Scotland didn’t make the World Cup because it would have been a dream to have played in one.

“But there’s always another one in four years.

“I would love to get back to playing for Scotland again with KT, but I have plenty to do before I can even think of that.

“I have to get myself fit and then back scoring goals for Hibs again and performing well to get my place back in the Scotland squad.

“My most important aim right now is just getting back on the park with the boys and then we will go from there.”

A lot has happened at Easter Road since Nisbet was struck down by injury — with the biggest change coming in the dugout.

Shaun Maloney was axed following the Scottish Cup semi-final defeat to Hearts, with former Sunderland gaffer Lee Johnson the surprise choice to take over this summer.

Nisbet has already had several chats with his new boss, who admitted he tried to sign the striker in the past, about how he fits into his plans.

Nizzy added: “I sat down with the gaffer in the days after he was announced and we have had chats since then.

“He’s tried to sign me a few times in the past, so it’s always good having a manager coming in who likes you.

“I won’t get carried away though, I know I still need to impress him on the training ground, and then the park when I am fit again.

“I’ve not mentioned his Hearts past yet, I might in the future right enough!

“The boys have taken to him really well, his principles and the way he wants to play the game, the boys are excited by it.

“He’s got a lot of experience at the top level and the places he has been are impressive.

“Now we want to make sure we have a good start and ultimately a good season.

“Last season has been put to bed and we aren’t talking about it, it’s all about moving on.

“It’s a fresh start for everyone with the new manager, now we have to work as hard as we can to rectify that.”

Johnson has already started to reshape his squad and could look to bring in striking reinforcements this summer.

Nisbet isn’t worried about the challenge for his spot — he thrives on it.

He said: “I like when new players come in and competition for a start is healthy.

“It’s a good environment for the boys as you have to perform to keep your jersey.

“I like the pressure of performing and it’s something I am looking forward to.

“I don’t see the fact I am out injured as a negative and I don’t think I have anything to prove.

“Being injured has been difficult because before that I was pretty much non-stop for the last few years in terms of playing.

“By the time I come back I will be raring to go, but I can’t look too far ahead and I have plenty of work to do first.”