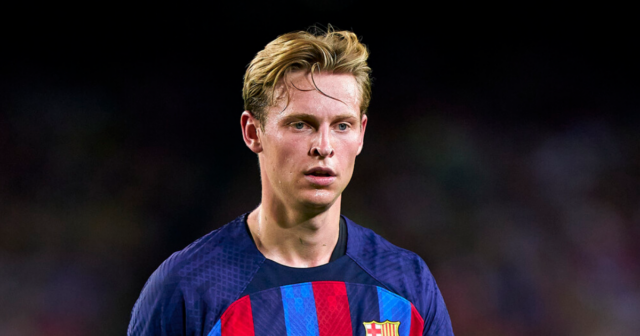 LOUIS VAN GAAL has urged Frenkie de Jong to leave Barcelona before the World Cup kicks off in November.

De Jong, 25, has been heavily linked with a move away from the Nou Camp this summer.

De Jong has been linked with a move away from Barcelona

Manchester United have been pushing to sign him since the transfer window opened in June, but the midfielder has made it clear that he does not want to make the move to Old Trafford.

However, Barcelona chiefs are attempting to force him out of the club, suggesting that he should reduce his wage demands or leave.

The Catalan giants already owe De Jong around £17million in unpaid wages after he agreed to defer the payment of his salary during the Coronavirus pandemic.

Club officials now believe that negotiating a move away for the Dutchman would resolve any financial differences.

But, Holland boss Van Gaal is concerned that the situation at Barcelona could destroy De Jong’s chances of breaking into the World Cup squad.

According to Dutch outlet AD, the 71-year-old has claimed that the midfielder must be given the chance to play regularly in order to properly prepare for the World Cup.

De Jong will likely have to seek a move away in order to get more game time, but a move to Chelsea could now be on the cards.

The Blues are reportedly close to striking a £67.6m agreement with Barcelona for the Dutchman, who is understood to be willing to make the move to Stamford Bridge.

The former Man Utd star has been informed by Xavi that he will have no place at Barcelona this season.

Tottenham are claimed to be in advanced talks to sign him on a free transfer, but Juventus are still in the race to complete a deal.