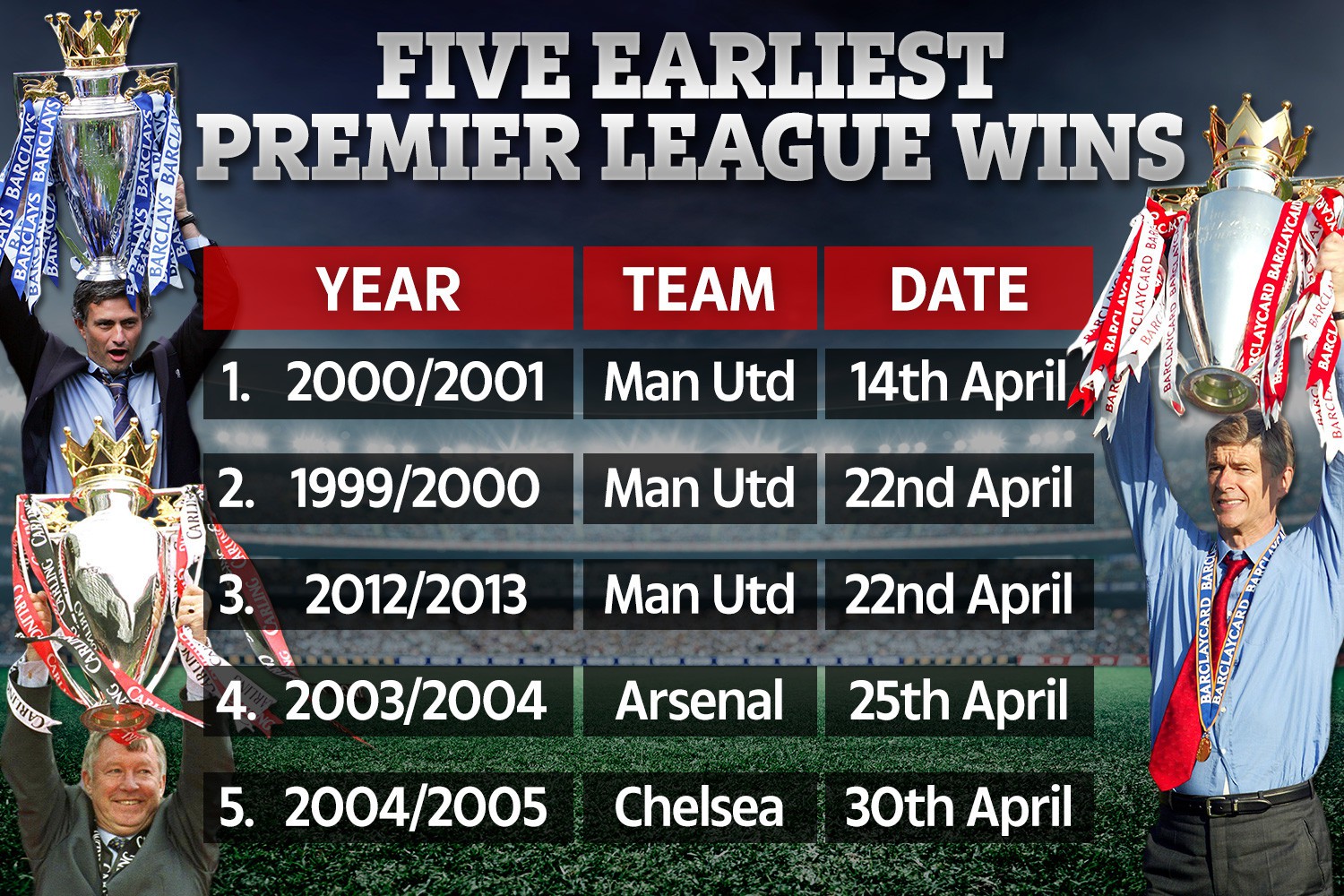 LIVERPOOL are storming towards their first title in 30 years and there is not a thing that their stunned rivals can do about it.

In truth, the Reds began their imperious march to glory last season, when City somehow managed to fend them off in the final weeks of the season.

But Liverpool have been so relentless this season that nobody has been able to come close to the startling consistency and quality instilled by the incredible Jurgen Klopp.

For most football fans it has been a case of “when” not “if” the Reds will win the title for a while.

It was Manchester United that set the current record for earliest Premier League title win back in 2001.

The Red Devils’ 4-2 victory over Coventry on April 14 that year saw them win the league with FIVE games to spare.

Now that all fans know it is a case of “when” and not “if”, we take a look at the dates that Liverpool could complete their crowning glory after 30 years of waiting – and if they could beat Manchester United’s record.

Manchester City’s title defence has been meek at best this season.

Major questions were asked when Aymeric Laporte was stricken in the early weeks of the season – and the writing was on the wall when City’s calamitous defending saw them succumb to defeat at lowly Norwich in September.

Pep Guardiola’s side have trundled along since – mostly winning, but with their next disappointing result, such as the weekend’s 2-0 loss at Tottenham, never feeling too far away.

But what if they were to fall apart altogether?

If the Citizens were to lose every game from here on in, Liverpool could clinch the title on MARCH 1 – should Leicester fail to pick up more than six points in that period.

City would have to lose clashes with Tottenham, West Ham and Leicester themselves to set up that scenario.

And it would then be a waiting game for Liverpool, as they play a day earlier than City that weekend, when Guardiola’s side pitch up at the Emirates to face Mikel Arteta’s Arsenal – the man who assisted the Sky Blues to their last two crowns.

IF CITY ARE RELENTLESS

With Aymeric Laporte now finally back from his knee injury sustained in August, it is quite conceivable that City could return to form.

After all, in the two seasons prior to this, they were used to putting together scarcely believable winning streaks.

If they could conjure another now, it would delay Liverpool’s coronation.

But even if City were to win every single game between now and the end of the season, the Reds could still beat Man Utd’s record.

And what’s more, if both sides were to keep picking up three points between now and the end of March, Liverpool would have the opportunity to seal the title against the reigning champions at the Etihad on APRIL 4.

Even a draw would be enough that day to seal glory for the Reds with SIX games to spare, which would also be a record.

IF THINGS STAY THE SAME

Liverpool have picked up an astonishing 2.9 points-per-game this season – in layman’s terms, they’ve only failed to win once, drawing at Old Trafford in October.

Meanwhile, City have picked up 2.08 points-per-game.

If both teams were to continue gathering results at their current pace, Liverpool would win the league with 110 points, an astonishing 31 above City on a paltry 79.

And better still for Liverpool supporters, City slipping up at their current rate would enable them to end their title-drought on MARCH 14… at the home of their fiercest rivals Everton.

The Merseyside pair face off at Goodison Park, exactly a month before the April 14 date that Man United last set the earliest title record.

And with Everton having not won a Merseyside derby in a decade, and having lost to Liverpool’s heavily rotated side in the FA Cup, nobody will expect anything other than a Liverpool triumph, the cherry atop the icing on their supporters’ cakes.