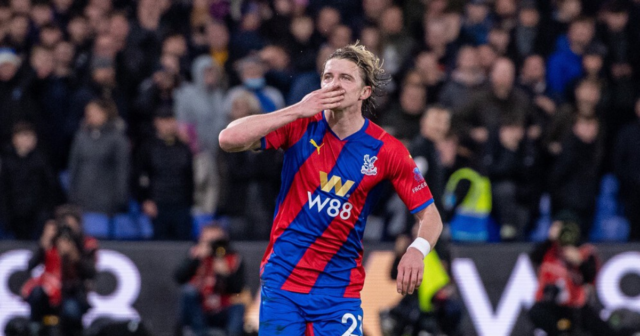 CHELSEA will have Conor Gallagher at their disposal next season once he has finished his already impressive loan spell at Crystal Palace.

The 21-year-old has played a vital part in Palace’s good start to life under boss Patrick Vieira.

Gallagher has scored six Premier League goals and picked up three assists, teasing Blues fans of what is to come when he returns to west London.

The England international would almost certainly slot into the heart of Thomas Tuchel’s midfield and play alongside Jorginho.

Gallagher has been likened to Chelsea’s greatest ever player Frank Lampard by his current boss Vieira.

The Frenchman also labelled Gallagher as a ‘manager’s dream’, which will undoubtedly please Tuchel.

Prem legend Vieira said: “It is a manager’s dream to have a player like Conor.

“When he is on the field, he will give everything. He is focused, he is concentrating and always gives his best.

“That is something that for me it’s really important.”

He continued: “Conor has this passion for the game when he is on the field like a Ray Parlour, but I would say he has maybe the quality finishing of a Frank Lampard.

“It is a manager’s dream to have a player like Conor because when he is on the field, he will give everything.

“He is focused, concentrated and will always give his best. This is something that for me is really important.”

Did you miss our previous article…
https://www.sportingexcitement.com/football/premier-league/man-utd-stars-return-to-training-after-covid-outbreak-including-victor-lindelof-following-worrying-health-scare