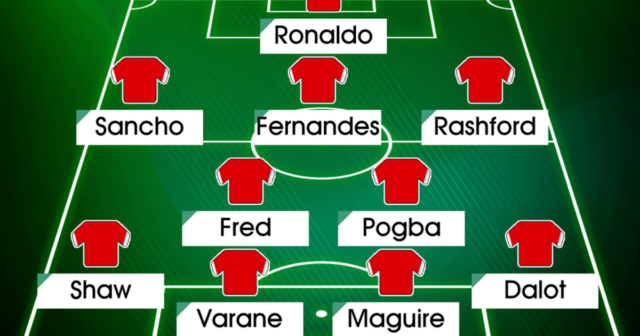 MANCHESTER UNITED host Brighton on Tuesday night looking to bounce back from consecutive 1-1 draws in the Premier League.

Ralf Rangick is likely to be without Edinson Cavani, with the striker in a race against the clock to recover from a groin injury in time to feature.

How Man Utd could start Tuesday night’s clash against Brighton
Cavani started against Burnley on Tuesday, but picked up a knock in training on Friday

Victory would fire the Red Devils back into the top four following uninspiring draws against Burnley and Southampton.

Talisman Cristiano Ronaldo in particular struggled to make his mark against the Saints.

But despite currently being on the worst goalscoring drought of his career, Cavani’s injury means Ronaldo is likely to keep his place up top.

Elsewhere midfielder Fred is expected to be reinstalled to Rangnick’s starting side after missing the Southampton draw due to a positive Covid-19 test.

Scott McTominay is the likely candidate to make way, with Paul Pogba impressing since making his return from injury.

Jadon Sancho too has found his mojo as of late, scoring two goals in his last three appearances in all competitions.

That should be enough for him to keep his position on the left hand side, with Marcus Rashford set to line up on the right.

Bruno Fernandes is expected to occupy his usual No10 role in behind CR7.

Diego Dalot continues to be preferred over Aaron Wan-Bissaka, while Luke Shaw could be handed back-to-back starts after Alex Telles was benched on Saturday as he continued to recover from Covid-19.

Harry Maguire and Raphael Varane are more than likely to partner each other in the heart of defence again, ahead of the brilliant David De Gea.

Alternatively Rangick could choose to freshen things up as the Red Devils take to the field for the second time in four days.

Youngster Anthony Elanga has been given his chance under the interim boss and could start on the left if Sancho is in need of a rest. 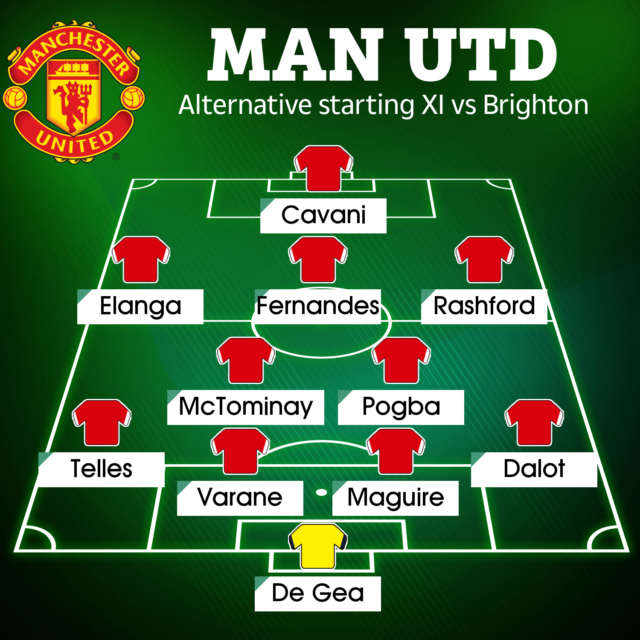 Telles could also be deemed fit enough to start and be promoted from the bench in place of Shaw.

Meanwhile Fred could be deemed not quite ready to be chucked in from the off, and could be eased back into things with a cameo off the bench.

That would see McTominay and Pogba continue to partner each other in the middle of the park.

Kick off at Old Trafford is 8.15pm, with Graham Potter’s Brighton coming into the clash in fine form.

The Seagulls are unbeaten in their last seven league outings and are currently sitting ninth in the Prem table.