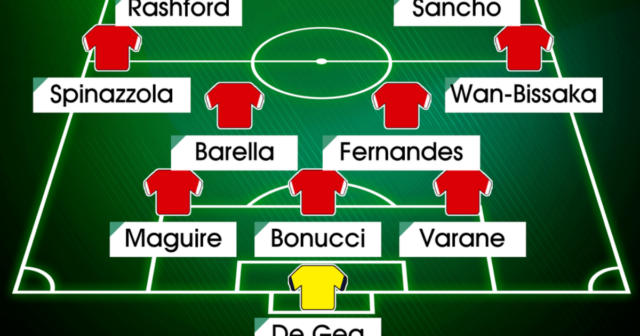 ROBERTO MANCINI has sensationally been linked with a return to the Premier League as the manager of Manchester United.

The former Man City boss, who won the Premier League title in dramatic fashion back in 2012 thanks to Sergio Aguero’s stoppage time goal, clinched the European Championships with Italy in the summer.

But they then missed out on automatic qualification for the Qatar World Cup next year and face the prospect of having to beat North Macedonia and either Portugal or Turkey to make it to the finals.

And if Italy do fail to qualify for the World Cup, Mancini could well find himself looking for another job in the summer.

Ralf Rangnick has been appointed Man Utd manager until the end of the current season on a six-month deal, at which point he will move upstairs to start his two-year contract as a consultant.

When the German leaves the head coach role there will be a vacancy that Man Utd need to fill as they search for a long-term successor to Ole Gunnar Solskjaer.

Mancini could fill that bill perfectly as he already has experience of the English top flight.

And he may choose to try and bring several of his Italy players with him to strengthen the Red Devils’ set-up.

Wingback Leonardo Spinazzola is someone who was sensational at the Euros before being ruled out with a ruptured Achilles tendon injury in the quarter-finals.

And he could be the perfect replacement for Luke Shaw if the England international continues to struggle in a United shirt.

Juventus centre-back Leonardo Bonucci is another name Mancini may seek to bring in to add to Harry Maguire and Raphael Varane.

Eric Bailly and Victor Lindelof have been poor when deputising for their first choice counterparts, so Bonucci would be a welcome addition to the squad.

Nico Barella is another who impressed on the international stage in the summer.

The silky, technical midfielder, 24, is exactly the sort of player who could replace Paul Pogba if the Frenchman leaves at the end of the season when his contract expires.

If those three Italians come to Old Trafford then it would make sense for Mancini to play a 3-5-2.

A back three of Bonucci, Maguire and Varane would likely shore up the defensive woes they have experienced so far this season, with Barella and Bruno Fernandes creating from midfield.

Spinazzola and Wan-Bissaka would be tasked with providing width, as Cristiano Ronaldo, Marcus Rashford and Jadon Sancho occupy the attacking positions.