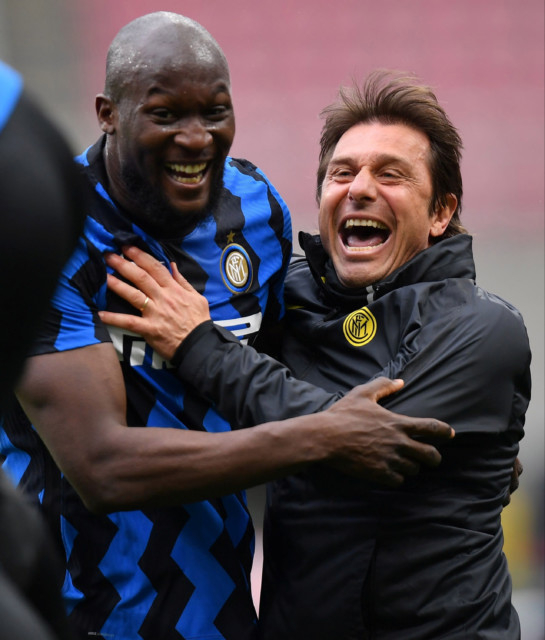 FOR Antonio Conte, it was the better the Red Devil you know.

The former Chelsea boss, a Premier League winner with the Blues, is now the toast of Milan (the black and blue side) for leading the club to their first scudetto since 2010.

Not only has Conte managed to wrestle the stranglehold Juventus had on Serie A – who won nine titles straight – he did it with a host of Manchester United rejects and others familiar to Premier League audiences.

Leading the line was the brilliant and rejuvenated Romelu Lukaku, who has 21 league goals to his name – only trailing Cristiano Ronaldo in the goalscoring charts.

While the experienced pair Ashley Young and Matteo Darmian gave Conte defensive stability that the Nerazzurri needed to end their long-wait to be champions.

Almost a year after he was fired by Chelsea, Conte arrived at Inter in 2019 with a point to prove.

The sleeping giant hadn’t toasted success for years – with a Coppa Italia title win in 2011 being their last major trophy win.

He described the challenge of breaking the hoodoo of underachievement that hung over Inter as the toughest of his career.

That, coupled with a Juventus side used to winning Serie A, made the task even harder.

And in his first season, it seemed like he had bitten off more than he could chew. 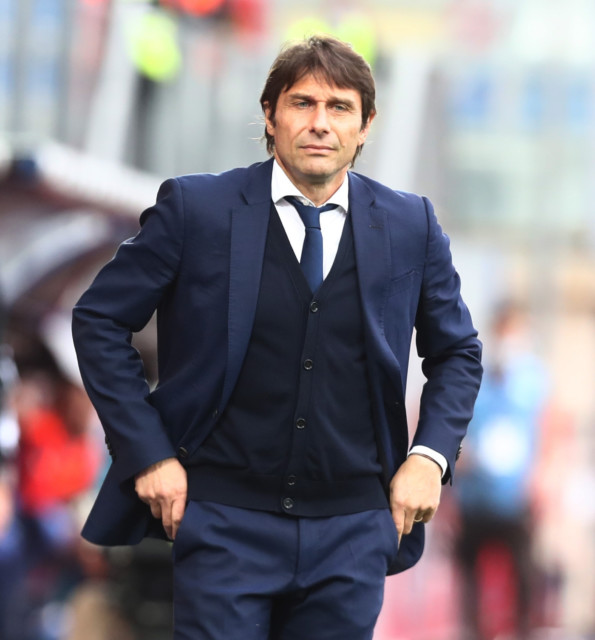 In his first season at Inter, it appeared Antonio Conte had bitten off more than he could chew 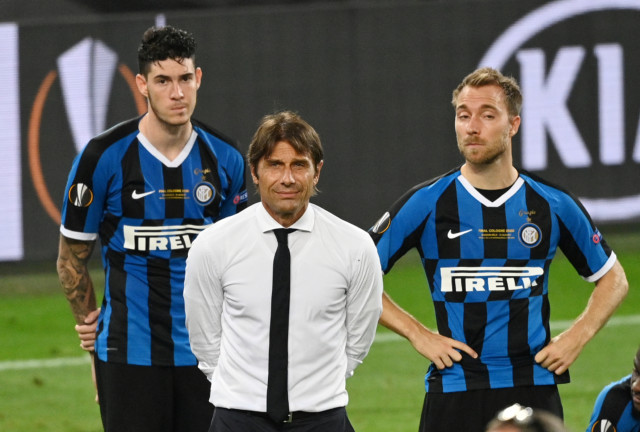 Inter, the perennial underachievers, finished runners-up in Conte’s first season. A 3-2 defeat in the Europa League Final to Sevilla might’ve left Conte with the feeling that his side were cursed.

However, a seed was sowed.

As Conte began to build his side, one thing became quite noticeable.

The tactician was looking to England to provide the warriors he needed in his quest for the Italian championship.

They were joined by former Chelsea star Victor Moses (on-loan) and Christian Eriksen. 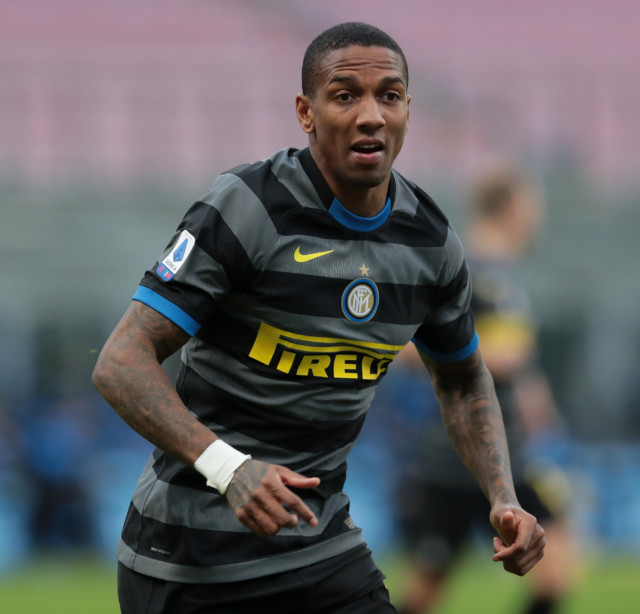 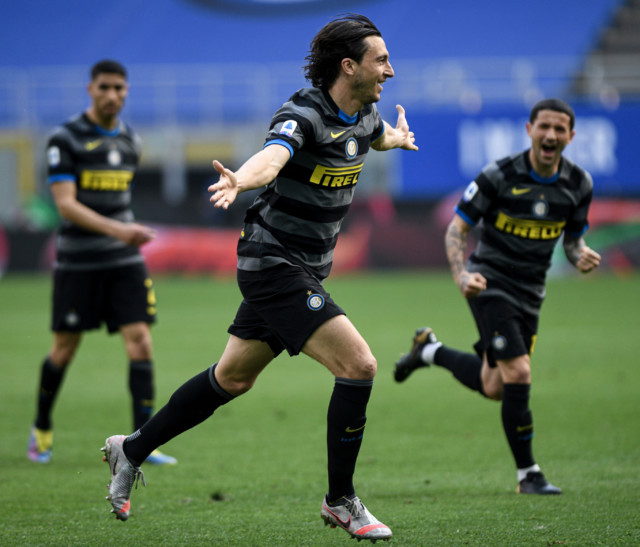 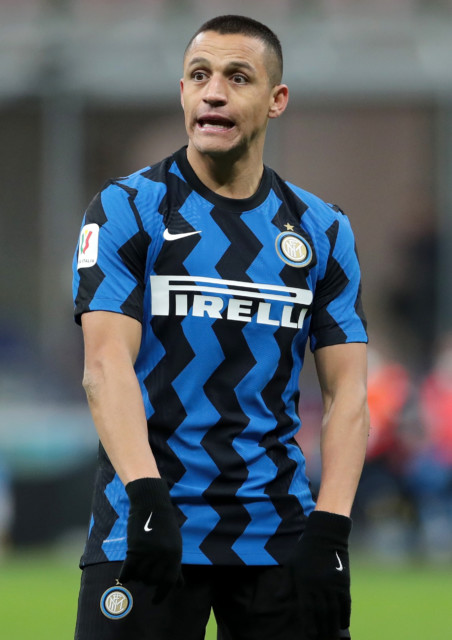 Ahead of this campaign, former Manchester United full-back Darmian joined from Parma and ex-Manchester City star Aleksandar Kolarov were brought in.

Conte’s time at Stamford Bridge was a scouting mission all along for turning Inter, often a bridesmaid, into a bride.

Despite a reasonable record at Old Trafford of 42 goals in 96 games, Lukaku was often criticised at Manchester United.

Sky Sports pundit Gary Neville called him “overweight” because of his “unprofessionalism”.

So when he was shown the exit door, not many fans were disappointed.

With a point to prove, Lukaku got to work on his fitness. He enlisted the services of famed nutritionist Matteo Pincella.

With the Nerazzurri sitting pretty atop Serie A, he is on the verge of a first piece of silverware since leaving England. 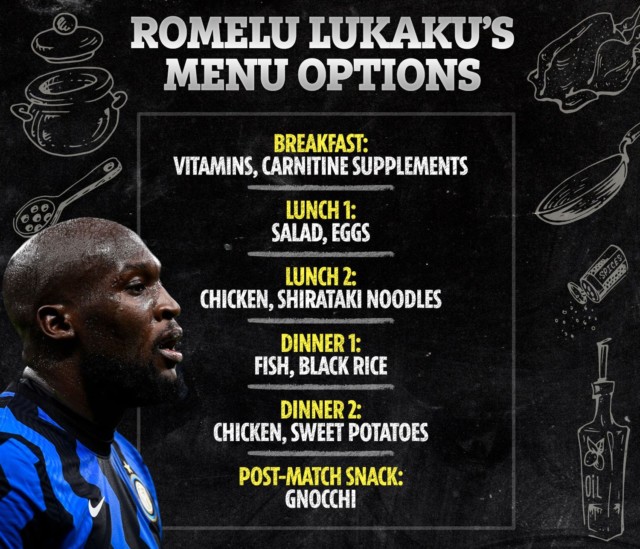 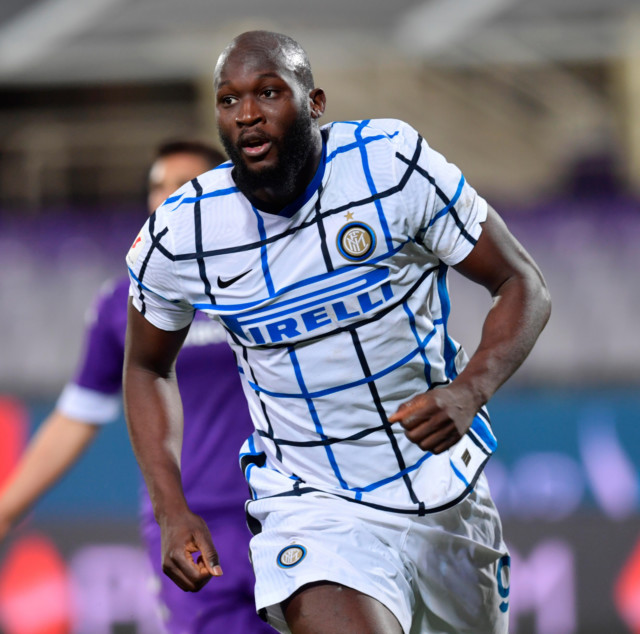 His favourites, pineapple on pizza and carbonara pasta were ditched in favour of chicken, shirataki noodles and fish.

Lukaku dropped 16 pounds and his game went from strength-to-strength.

In England, especially at West Brom and Everton, we were used to seeing Lukaku as a target man.

Even at United he was somewhat of a battering ram for smaller players around him to flourish.

This season, with a new lease of life, the Belgium striker has become much more than that though.

A leader for the team, he inspired his team-mates to believe in a Serie A triumph.

Not only did he chip in with those 21 league goals, his link play contributed to 10 assists. 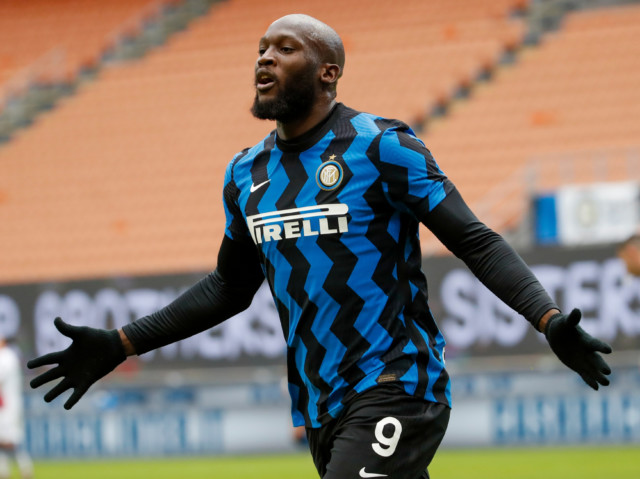 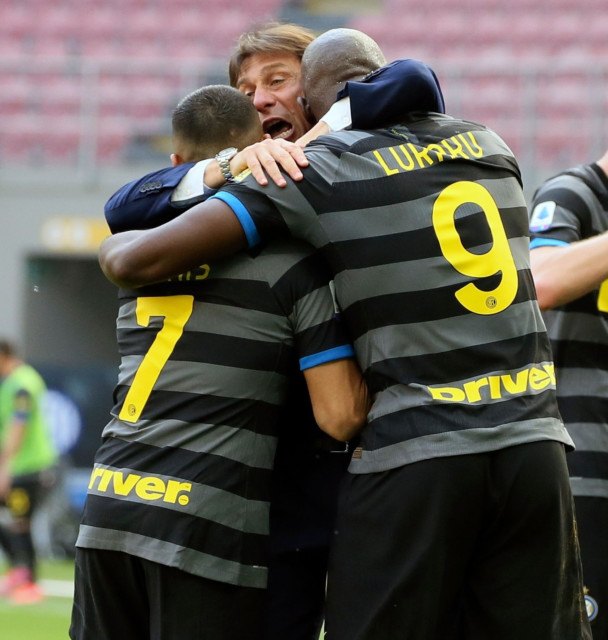 And it was telling after a 2-1 triumph over Sassuolo back in April that the Italian coach reminded those who doubt his £70million signing.

“I have not forgotten how a lot of people turned their nose up when we signed Lukaku and said he was overrated,” Conte said.

“But I always said that he arrived here with potential and that if he worked hard he could do extraordinary things. Lukaku has made exceptional improvements and can make even more.”

Alongside Lukaku, Argentina international Lautaro Martinez has continued to prosper in Italy.

He and his strike-mate pose an attacking threat few teams in world football, never mind Italian, have an answer for.

Between them, they have been involved in 54 of Inter’s 74 Serie A goals this season – either scoring or assisting. 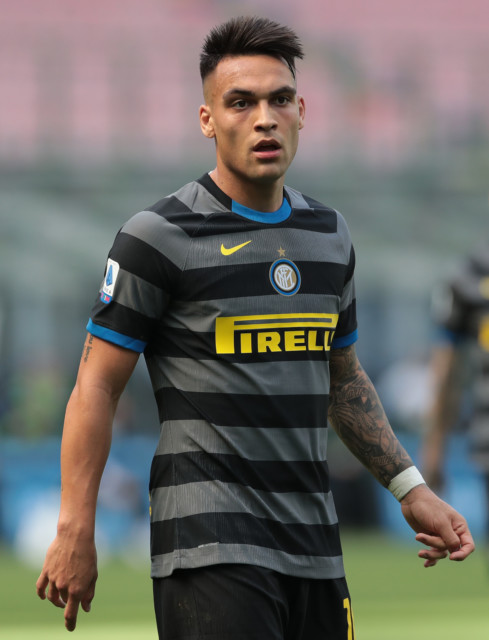 Lautaro Martinez has been the perfect strike-partner for Lukaku, chipping in 15 goals 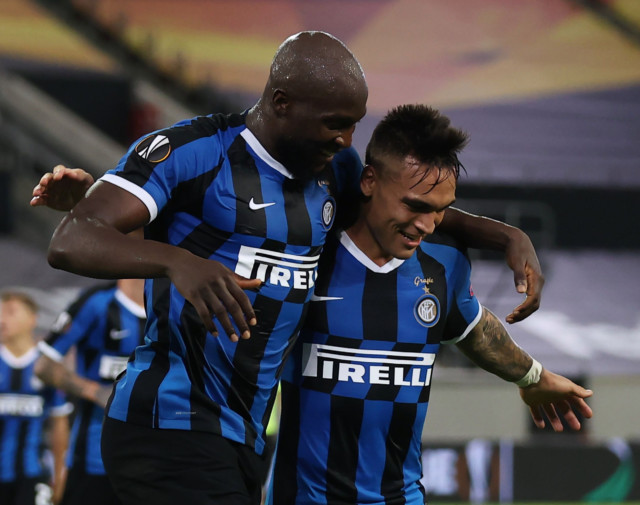 Between them, Lukaku and Martinez have contributed towards 54 of Inter’s 74 Serie A goals this season

At the back, the three centre backs – Milan Skriniar, Stefan de Vrij and Alessandro Bastoni were aided by Matteo Darmian and Arsenal target Achraf Hakimi in giving Inter a defensive stability.

They have the best defensive record in Serie A with just 29 goals in 34 games conceded.

A man with a penchant for success, Conte is being lauded by Inter fans for delivering a success they’ve waited long enough for.

Incredibly, some of those supporters were calling for his head back in November – with the hashtag #ConteOut trending on Twitter after a poor start.

But he delivered, helping the team improve mentally and win those all important big games.

Inter lost just one game in 10 against the top seven sides, winning five of those. 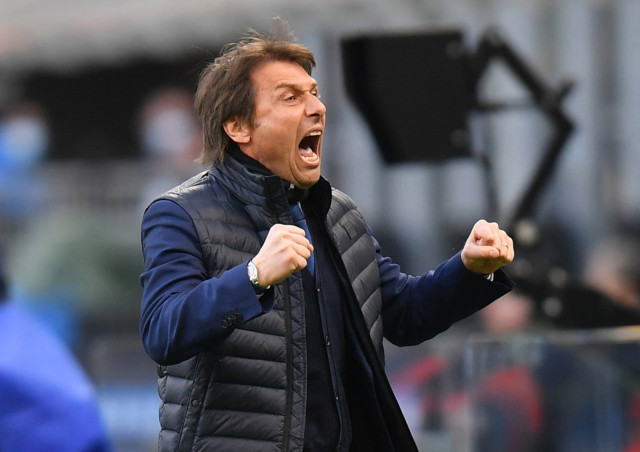 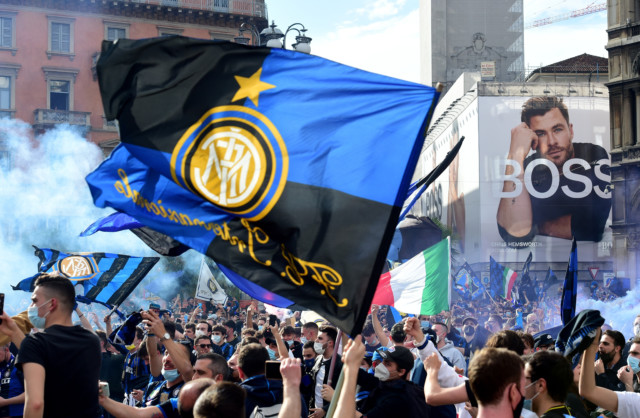 Managing to accommodate Christian Eriksen and Ivan Perisic into his team, when it looked like they were heading for the exit door, also showed his tactical brilliance.

All that said, Conte has refused to confirm if he will be with Inter next season.

“We certainly focused on the present, as this was too important to get it done and bring Inter back to winning the scudetto after so many years out.

“The president has arrived now, there are four games left. As I have more experience, I now also want to enjoy this moment, because in the past I got myself caught up in other problems and didn’t really enjoy it enough.”

Inter fans will be hoping Conte enjoys it enough to wish to return for a title defence.