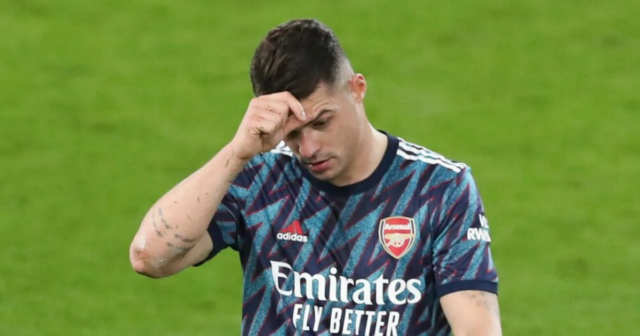 ARSENAL ace Granit Xhaka apologised to his team-mates after picking up another reckless red card during the 0-0 draw with Liverpool in the Carabao Cup semi-finals.

Xhaka was sent off after just 24 minutes following a shocking high challenge on Diogo Jota’s waist and gave referee Michael Oliver no other choice but to give him his marching orders.

The Switzerland international picked up his fifth red card as a Gunners player and made Mikel Arteta’s work even harder at Anfield.

Arteta is dealing with immense shortage in midfield following Ainsley Maitland-Niles’ departure, while Thomas Partey and Mohamed Elneny are on international duty at the Africa Cup of Nations.

The 29-year-old took to Instagram after full-time and issued a heartfelt apology stating he is “so proud” of his team’s resilience as they still managed a clean sheet at the Kop.

Xhaka posted: “I want to apologise to everyone. I am so proud of my team and the spirit that they showed to keep a clean sheet tonight.”

Arteta switched to a back five following the Swiss ace’s dismissal and still managed to get a result against all odds.

Arsenal now have high hopes of meeting Chelsea in the Carabao Cup Final as they will be hosting Liverpool at the Emirates in the return leg on Thursday.

The Spanish head coach remained coy about Xhaka’s red card as he claimed he didn’t have a chance to look back at it.

Carragher told Sky Sports: “Xhaka has two or three looks at Jota, he knows he’s there. It’s a perfect pass from [Andy] Robertson and Jota just needs to get his chest on it.

“Xhaka does what Xhaka does. Makes an absolutely ridiculous challenge when Jota has still got so much to do. If the goalkeeper keeps coming, I think he maybe scares Jota and heads it away.

“But, was it a red card? There is no doubt. The way he has taken him out, the force he’s done it with, it’s a ridiculous challenge.”