I was scoring for Scotland one week, the next my season was left in tatters, says Kieran Tierney
Advertisement 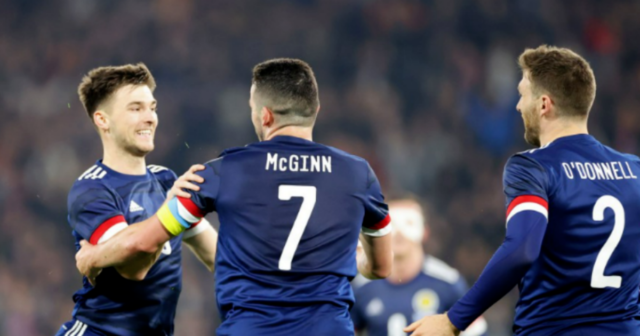 KIERAN TIERNEY’S outstanding career clicked into gear from the moment he made his Celtic debut at just 17 in 2015.

But it was a click of a different kind in his left knee in April that plunged the Arsenal hero into fresh injury torment.

Tierney immediately feared the worst — that he would miss the Gunners’ intense final push for a Champions League place and Scotland’s crunch World Cup play-off against Ukraine.

Sadly, the gut-wrenching confirmation of what deep down he’d suspected during a routine gym session at his club’s training ground soon came with scan results.

Tierney would be out for possibly up to three months — sickening news also for club and country bosses Mikel Arteta and Steve Clarke.

But the inspirational defender responded like he always has to injury blows — there have been a few — which have tested his character over his seven years as a pro.

Massively motivated to come back earlier — and stronger.

Tierney was never going to make the clash at Hampden this week or indeed a possible play-off final in Wales on Sunday.

But his ferocious approach to punishing rehab has got him at least a week ahead of schedule to make Arsenal’s return to training at the end of June.

Tierney never moans about bad fortune or workloads that come with being a top-level star. Nor, for that matter, does he seek sympathy. Tierney just gets on with it — always fully appreciative of the privileged life he has.

In his first in-depth interview since he was sidelined, he told SunSport: “We played Wolves at home in February and I felt something in my knee in the first half.

“I told the physios and we tested it. But it was fine and it also wasn’t that sore.

“I carried on playing for Arsenal, then reported for Scotland duty and played twice with no problems. I came back completely fine. Then I was doing some leg exercises in the gym and my left knee clicked.

“I instinctively felt it wasn’t right and that I should probably go for a scan.

“I wasn’t in any great pain. I’d played for Arsenal and we’d been winning, then for Scotland I got a goal and an assist. So there had been nothing to worry about after that Wolves match.

“But the scan result came back and suddenly I’m needing an op. It was so unfortunate.

“But after that click I just knew it wasn’t normal.

“The verdict was 12 weeks — and it was gutting when I realised the games I’d miss for Arsenal and Scotland. However, there was nothing I could do about it.

“Instantly, I just wanted to know from the specialist and the physios what it was going to take to get back quickly.

“Whenever I have been given a timeframe for recovery I’ve always aimed to get back earlier.

“I push myself as hard as I can, it’s the only way I know.

“It’s tough working full days in the gym on your own. But you’ve got to keep on pushing yourself. There’s no point feeling sorry for yourself. I don’t look for or expect sympathy from anyone. At the end of the day I’m lucky to be a footballer — and I never take anything for granted. I’m a NIGHTMARE for the physios. I’m always on at them to get me back quicker.

“And I’m a terrible spectator. Not being able to do anything to help the team, I hate it. My target is to be back for the end of June and the start of pre-season at Arsenal. I’m on course for that. My rehab’s going well.

“And I can’t give the Arsenal sports science, fitness and medical staff enough credit. They are absolutely top notch. I couldn’t wish for a better support set-up here.

“Mentally and physically, the club provides every possible back-up for the players.

“And I’m certainly not looking for any medals because I’m working hard. That’s just what footballers — indeed everybody in life — needs to do.”

Tierney does not know any other way to train or play than going at it full tilt.

Taking things a bit easier is a completely alien concept to him.

To some it is a possible reason why he has picked up injuries.

But Tierney is NOT for compromising his approach.

He said: “I’ve always been like that since my younger days. I’ve always had a worry of not wanting to cheat team-mates or the team overall.

“Giving everything is just my style and I enjoy it that way.

“Maybe I don’t do myself any favours at times.

“I remember Steve Clarke saying to me one day, ‘Kieran, sometimes you can chill, you know. Don’t worry, everybody already knows what type of player you are and what you can bring’.

“But I told him, ‘I can’t, it’s impossible for me’. Obviously, if I’ve got a niggle then I know I need to be careful.

“In my youth days, or coming through, I had it in my head that I wasn’t the best technically. So I felt I had to work even harder.

“It’s just stuck with me — and I can’t see me changing now. I’d end up feeling guilty if I ever eased up on things.”